While there has been significant global progress in curbing conventional tobacco products, newer tobacco and nicotine products such as e-cigarettes are evading regulation, according to the World Health Organization (WHO) 2021 report on the tobacco epidemic.

Some 5.3 billion people are now covered by at least one of the six tobacco ‘MPower’ control measures recommended by the WHO, including high taxes, bans on promotion, pack warnings and helping people to quit.

But electronic nicotine delivery systems (ENDS) such as ‘e-cigarettes’ are often marketed to children  – and escape regulation, according to the report, which was launched on Tuesday.

The tobacco industry also uses “thousands of appealing flavours and misleading claims about the products” to market these to children and teens, according to the WHO, adding that children who use these products are “up to three times more likely to use tobacco products in the future”.

“Some are modifiable by the user so that nicotine concentration and risk levels are difficult to regulate. Others are marketed as ‘nicotine-free’ but, when tested, are often found to contain the addictive ingredient.

“Distinguishing the nicotine-containing products from the non-nicotine, or even from some tobacco-containing products, can be almost impossible. This is just one way the industry subverts and undermines tobacco control measures.”

Youth are targets of the tobacco and nicotine industry

Caleb Mintz, a young anti-tobacco advocate from the US told the launch that an official from a vaping company had given a ‘mental health’ talk at his high school where he cast doubt on the dangers of e-cigarettes and vaping.

“When I was in ninth grade, a speaker came to my high school under the guise of a mental health seminar. That speaker turned out to be a representative of Juul Corporation, which is one of the largest vaping conglomerates, and the speaker proceeded to send mixed messages about the safety of the [vaping] devices, saying ‘It is the safest product on the market’,” Mintz said

“As a result of the presentation, many of my peers began to question whether the product  once seen as dangerous was even harmful at all, with some of my closest friends now believing their habits are justified, due to a trusted adult telling them that.”

US anti-tobacco advocate Jasmine Hicks, told the launch that the majority of young people that her organisation, Truth Initiative, reached out to had no idea that e-cigarettes even contained nicotine. 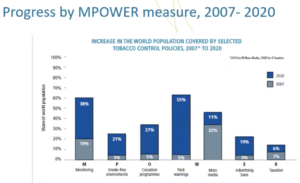 “Where they are not banned, governments should adopt appropriate policies to protect their populations from the harms of electronic nicotine delivery systems, and to prevent their uptake by children, adolescents and other vulnerable groups,” said Tedros.

Eighty-four countries don’t restrict or regulate ENDS in any way, although 32 countries have banned their sale and 79 have adopted at least one partial measure to prohibit their use in public places, prohibit their advertising, promotion and sponsorship or require the display of health warnings on packaging.

“More than one billion people around the world still smoke. And as cigarette sales have fallen, tobacco companies have been aggressively marketing new products – like e-cigarettes and heated-tobacco products (HTP) – and lobbied governments to limit their regulation,” said Michael Bloomberg, WHO Global Ambassador for Noncommunicable Diseases and Injuries, who funds much of the global anti-tobacco work.

“Their goal is simple: to hook another generation on nicotine. We can’t let that happen.”

There are an estimated one billion smokers globally, 80% of whom live in low- and middle-income countries (LMICs), and tobacco is responsible for the death of eight million people a year, including one million from second-hand smoke, according to the  WHO.

Almost 80% of high-income countries (HICs) (78%) regulate ENDS while three-quarters of LICs do not.

“The tobacco industry’s ramped up marketing of ENDS and HTPs, especially to young people, is a real threat,” said Rebecca Perl, Vice President of Partnerships and Initiatives at Vital Strategies.

“With its intent on hooking a new generation of tobacco users, the industry is snatching young people’s opportunities, experiences and future potential by shortening their lives. Young people who use new products such as ENDS and HTPs are more likely to regularly use conventional cigarettes, as cited in the report. Yet remarkably 84 countries still have no regulations and restrictions at all on these products.”

Renowned marathon runner and clean air advocate Paula Radcliffe joined the launch to appeal for public health warnings about tobacco and e-cigarettes to be carried on social media to reach young people.

“Our bodies enable us to do so much and to achieve so much, but we have to look after them and look at the fuel that we put into them,” said Radcliffe. “There are enough stresses around in this world which are unavoidable. I think tobacco is really one that is avoidable. Respect your body and the world by what you put into it and how you live your life.”