Rumours about the whereabouts of Tanzanian president John Magufuli, are intensifying as the leader who questioned the existence of the SARS-CoV2 virus was reportedly in intensive care with COVID-19 – somewhere in Nairobi or possibly now even in India.

Magufuli has not been seen for almost two weeks, sparking widespread speculation about his health. His absence is unusual as he is known for making frequent public speeches and appearing on state television several times a week.

Tanzanian opposition leader, Tundu Lissu, who lost last year’s election to Magufuli, tweeted on Thursday that the president had been transferred from a hospital in Kenya to India – although he did did not provide evidence:  “His COVID denialism in tatters, his prayers-over-science folly has turned a deadly boomerang!” Said Lissu in a tweet.

Latest update from Nairobi: The Man Who Declared Victory Over Corona “was transferred to India this afternoon.” Kenyans don’t want the embarrassment “if the worst happens in Kenya.” His COVID denialism in tatters, his prayer-over-science folly has turned into a deadly boomerang! pic.twitter.com/DyXYYbIvdd

But Tanzania’s Prime Minister, Kassim Majaliwa, urged citizens to ignore “fraudsters”, claiming that  the president was strong and at work, as usual. Majaliwa also said he had talked to him on the phone and that he was grateful to the voters.

“The president is very busy. Where do they want him to go? Have you ever found him wandering around Kariakoo or Magomeni?” he asked while at a function in Tanzania’s Njombe region. The information was sent in tweets on social media in Swahili.

However, the government is under increasing pressure to reveal Magufuli’s whereabouts – as an online publication speculated that the rumours about him also were being fed by the Tanzania Intelligence and Security Service (TISS) as part of a power struggle withn in the ruling party.

Government sources in Tanzania told Health Policy Watch that they did not know the whereabouts of the President: “

Some source salso  are reporting ‘unusual activity’ at the Tanzania High Commission in Nairobi, Kenya.

Opposition leader Lissu told the BBC that the 61-year-old president had suffered a cardiac arrest before being flown to a hospital in Nairobi for urgent treatment.  Lissu later said that the president was in a coma and had been transferred to a hospital in India. 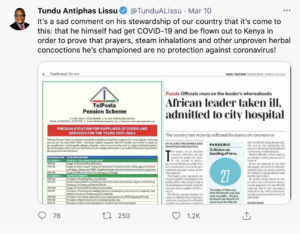 Scientist and Devout Catholic – But COVID-Skeptic

Magfuli, a scientist and a devout Catholic, has frequently played down the threat of COVID-19, saying that God would protect his nation from the disease.  In late-February, following a rebuke by the WHO and the death from COVID of his own vice-president, Magfuli finally signaled that he was willing to take the disease more seriously.

At that point, the Tanzania Medical Association unleashed a new camapign on prevention of COVIVD-19.  But some worry that the shift may have been too little too late.

For months, Tanzania has refrained from reporting to the WHO on new COVID cases – and doctors in the country privately admitted that they were under tremendous pressure to write anything but COVID on death certificates.

Meanwhile, officials such as the chief government chemist, Fidelice Mafumiko, promoted the use of herbal medicine to cure COVID-19. Tanzania’s Health Ministry announced in a press conference last month that it had no plans to accept COVID-19 vaccines, insisting that the country is safe.

Now social media is awash with news of the Tanzania president allegedly being admitted in a high care hospital because of the virus.

Many people posting on social media with the hashtag #prayforMagufuli have also criticized irresponsible the way Tanzania handled the pandemic.

“If it’s true Covid denier Magufuli is in Nairobi Hospital with related complications, the inequity of it would be endless. He gets to fly to a Nairobi hospital, while those who listened to him stay home inhaling eucalyptus steam & hanging on to prayers. Still, wish him recovery,” said Charles Onyango- Obbo, a Ugandan author, journalist and editor.