Some 1.7 million people in cities across the planet died from polluted air in 2019, according to the first-ever study of urban air pollution that covers virtually every city in the world over the size of 50,000 people, as per the UN definition.

Conditions are the most severe in cities of South Asia, (WHO’s SouthEast Asia region). Strikingly, however, cities in West Africa, are a close follower – with average annual fine particulate (PM2.5) concentrations of 62 micrograms/cubic meter of air (µg/m3), more than 15 times above WHO guideline levels.

The study by the State of Global Air Initiative, a collaboration between Boston-based Health Effects Institute (HEI) and Seattle-based Institute for Health Metrics and Evaluation’s (IHME) Global Burden of Disease project, is the largest analysis of urban air pollution to date.

It examines data spanning the years 2010-2019 for 7,239 cities, home to some 2.8 billion people.  It is also the first global analysis to compare trends in cities over time.

The study confirms that urban residents face some of the world’s worst air quality, with 98% of people in all cities around the world breathing air that fails to meet the WHO Air Quality guideline level of 5 µg/m3 –  what is considered the most key indicator of health impacts.

And with 68% of the world’s population expected to live in urban areas by 2050, air pollutants loom as a major battle for many of the world’s top cities.

While PM2.5 exposures “decreased” in some cities between 2010 and 2919, most notably in China, in parts of South Asia, notably India and Indonesia, air pollution in fact became much worse.

As for the present day: “Exposures are particularly high in cities in Asia, West  Sub-Saharan Africa, and Andean and Central Latin America, the report concludes. “More progress is necessary to protect the health of residents.”

Some 86% of cities around the world also exceed WHO’s guidelines for NO2, whose dangers for asthma and lung diseases have been better recognized more recently.

Strikingly, cities with excessive levels of NO2 include cities in many high- and middle-income countries where stricter regulations on vehicle and power plant emissions may have reduced PM2.5 levels – but have not sufficiently addressed NO2.

Diesel vehicles, promoted by the industry over the last 30 years, emit comparatively higher levels of NO2. 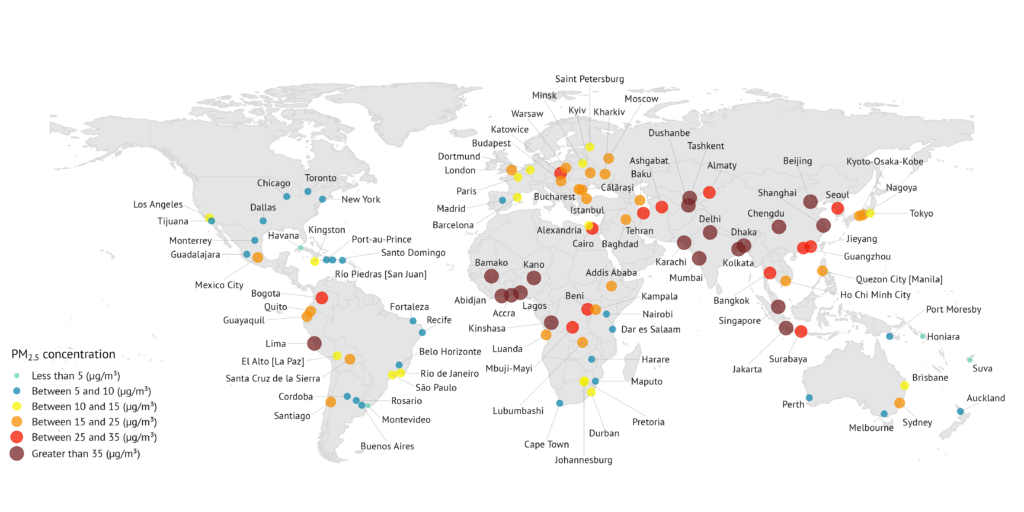 The new analysis combines available data on air quality from ground-level monitoring stations with satellite data from thousands of cities that lack stations of their own. It provides the full data set on an interactive database.

The study estimated annual average concentrations of PM2.5 and NO2 for cities across the planet by integrating available ground-level and satellite data, then dividing that information into grid cells of approximately 1×1 km at the equator.

Only 117 nations have ground-level monitoring systems to track PM2.5, and only 74 nations are monitoring NO2 levels, according to the report, which draws its ground level data from an online repository maintained by the World Health Organization.

Based on available ground station data, WHO in April issued estimates of average annual air pollution concentrations in 4,000 cities and settlements around the world. Those included PM2.5, and  NO2 when data was available.

Some of the findings about global hotspots are roughly comparable with WHO’s own recent analysis – which also found that people in South/Southeast Asia, the Middle East and parts of Africa continue to breathe some of the worst air on the planet.

However, WHO did not analyse trends over time. Nor did WHO attempt to incorporate satellite data from cities  where ground-level measurements are unavailable – which includes most of urban Africa. This new analysis fills in that critical gap – and in the process it reveals how serious pollution in some parts of Africa, and particularly West Africa, has become.

“Since most cities around the world have no ground-based air quality monitoring in place, estimates of particulate and gas pollution levels can be used to plan air quality management approaches that ensure the air is clean and safe to breathe,” said Susan Anenberg, an associate professor at George Washington University and one of the project collaborators.

West African cities – now among the world’s most polluted

In terms of population-weighted exposures, the data includes some surprises. Not only do people in longstanding hotspots like Delhi, Kolkata, Dhaka and Jakarta as well as Beijing, continue to breathe some of the the worst air in the world, so do people in Lima Peru;  Lagos and Kano, Nigeria, and Accra, Ghana. 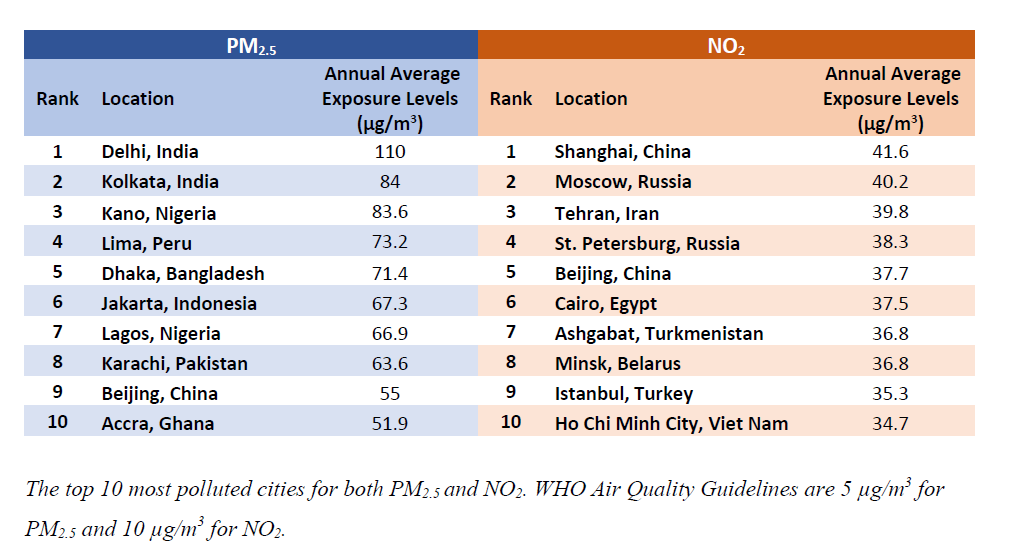 Geographic patterns of air pollutants NO2 and PM2.5 strikingly different

The study also confirms prior WHO findings that the geographic patterns of excessive exposure to PM2 and NO2 are considerably different at times.

“Cities in Asia and Africa are already hotspots for PM2.5 pollution,” the study concludes. “At the same time, NO2 pollution – primarily from vehicle traffic – is high and growing in some cities and regions that are not PM2.5 hotspots.” 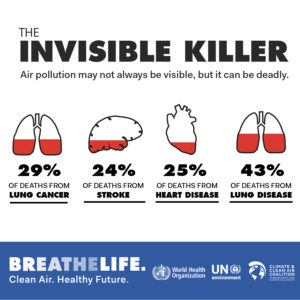 Air pollution is responsible for about 1-in-9 deaths worldwide, or between 6.7 to 7 million deaths a year, according to the latest estimates by both HEI/IHME and WHO.

The latter is related largely to exposures to smoke from biomass, kerosene and coal fires used by billions of people for cooking and heating.

Air pollution is a factor in illness and premature deaths particularly in older people and those with chronic respiratory and cardiovascular conditions.

Exposure to NO2, meanwhile, exacerbates lung inflammation, contributing to asthma and other respiratory diseases, and potentially impeding children’s lung development. High NO2 exposures that lead to difficulties breathing, coughing or wheezing, may cause spikes in hospital and emergency-room admissions, according to WHO. People living near busy roads congested with lots of city traffic often are exposed to higher levels than people in rural settings.

In terms of mortality, a significant number of Chinese cities, led by Beijing, continue to have a high proportion of deaths from air pollution. That is despite the fact that China is the country that has also seen the greatest improvements in urban quality over the past couple of decades, the report finds.

This paradox is due to two factors – the comparative ageing of China’s population and the fact that exposure to air pollution, even at comparatively lower levels, can still be deadly. Recognizing this, WHO in 2018 reduced by half it’s guideline level for annual average exposure levels of PM2.5 from 10 to  5 µg/m3. WHO also halved its NO2 guideline level to 10 µg/m3.

In South/SouthEast Asia mortality from urban air pollution also has grown significantly in the past 20 years, the report also concludes – with Jakarta and Delhi having the highest levels of mortality, per 100,000 population, from air pollution.

Most of those cities also are areas long reliant on coal-burning for heat and power production.

Compared to other parts of eastern and central Europe, Kyiv and Kharkiv in Ukraine, the Polish cities of Katowice and Warsaw, as well as Budapest Hungary and Bucharest, Romania, also had high pollution-related death rates.

Conversely, African cities don’t rank as prominently in terms of global air pollution-related mortality  – largely because the residents of African cities are much younger on average and thus not as likely to die – yet – from air pollution related diseases.

The good news, the study concludes, is that there are a wide range of cost-effective solutions already available to reduce pollution from many key pollution sources.

Those include the promotion of green and sustainable transportation, expanded access to clean energy for households and a shift to clean and efficient energy production based on renewable energy sources and not fossil fuels.

The report also cites some of the urban solutions have yielded results, including stricter vehicle and power plant emissions limits and urban planning solutions that reduce the need to travel.

In Europe, for instance, more than 300 cities created low-emission zones (LEZs) for vehicles that reduced traffic-related air pollution by banning the entry of high-polluting vehicles and encouraging more walking, cycling and use of public transportion.

But those successes remain exceptions to the rule for many, or even most, of the world’s low and middle income cities – which have not yet come to grips with air pollution as a deadly health threat.

“As cities around the world rapidly grow,” said Pallavi Pant, a senior scientist with HEI  who oversaw the study, “the impacts of air pollution on residents’ health are also expected to increase, underscoring the importance of early interventions to reduce exposures and protect public health.”