Despite a severe lack of COVID test and serological data in Africa, most people on the continent have probably already been exposed to SARS-CoV2, said the director of the influential Institute for Health Metrics and Evaluation on Thursday.

And in light of that, and the fact that COVID vaccines do not prevent infection, but rather only serious cases, more investment should probably be placed into testing and anti-viral treatment for older, more vulnerable people, said Dr Chris Murray, whose Seattle-based Institute collaborates closely with the World Health Organization on many of its key global data studies.

Murray stressed that, “regardless of whether people have got some protection from past infection there’s a strong moral arguments about making more vaccine supply available in Africa – everybody who wants a vaccine should certainly be able to get one as a matter of fairness and equity.”

But he also included a provocative caveat, adding that: “if you are a government in Africa, there are a bunch of questions” that still arise about investment priorities.

He spoke Thursday at an IHME briefing webinar on the latest trends in Omicron infection – and what that means for the pandemic and policymakers going forward.

IHME data shows vaccine hesitancy in Africa to be among the highest in the world – along with Eastern Europe – with less than 50% of people in some countries saying that they would like to be vaccinated,” Murray said, without elaborating on what that data is. Follow-up questions by Health Policy Watch, submitted by email, failed to yield a reply by publication time.

“But as vaccine supply becomes available, you’re going to hit that limit to people who want to be vaccinated,” he warned.

In addition, there is currently no solid “adult vaccination platform in many sub-Saharan African countries.”

“So the other very real policy question is  should there be more focus on getting the testing capability and access to antivirals in high-risk, older adults in Africa, and would that strategy have a bigger health benefit.

“There’s a lot to be figured out for countries in Sub Saharan Africa about what  should be the focus, in addition to vaccination, making it available in terms of reducing harm in the future.

Throughout most of the pandemic “one of the great gaps” in global data on prior exposure to SARS-CoV2 has been Africa.

“There is a lack of population based seroprevalence data in many parts of sub-Saharan Africa – it’s been something I’ve been asking people to fund since May of 2020.

“But now that there are more studies coming – we’ve heard of early results. The studies from sub-Saharan Africa suggest that 70-80% of populations in Africa pre-Omicron, have already been infected.

He cited studies from South Africa in early December 2021, which suggested that people coming for treatment at antenatal clinics and other health settings had a 30% prior infection rate – even before Omicron hit with full force there.

“So we think the vast majority of Africa has actually had Omicron,” he concluded, based on that and other data available. He did not elaborate on the other data.  And as of publication time, IHME had not responded to follow up questions from Health Policy Watch.

But he said that the worldwide nature of current Omicron exposures raise new questions about how to prioritize resources going forward.  Pushing aggressively for access to treatments for those who do become ill may now be more important than ever.

“Do you put your energy into securing access and ability to deliver in a timely way the Paxlovid or other antivirals that are coming – which can reduce the fatality rate by 90%, which is a pretty dramatic reduction?”

Omicron as the ‘great equalizer’

People Vaccinated and Infected Have the Best Immunity

At the same time, people who have been both vaccinated and infected with COVID appear to have the best immunity today – and thus are likely to be better protected against future SARS-CoV2 variants going forward, added Murray.

“ Who has the greatest protection?- the red line does – people who are vaccinated and infected. The next category is probably green, previously infected.  And the people in the highest risk categories [blue and yellow] are vanishingly few,” said Murray, pointing to a line graph estimating prevalence of the four groups over the course of the pandemic.

“In some ways, Omicron was the great equalizer… We now know that infection-acquired immunity is as good or better than vaccination – although you run the risk of dying with the former.

But if you are in the fortunate 99%, or now with Omicron, 99.9% to not die, then you end up with pretty good immunity, and what’s what the studies now seem to suggest.

“And it (infection derived immunity) may even wane more slowly. There are people who are arguing that you get more diverse immunity because it’s not just the spike protein,” the element used in most vaccines to prompt immunity – “and that may put you in a better place for new variants in the future.”

His statements echoed emerging findings of other recent research, including a study published this week in the journal Science Immunology, by a team of researchers based at the Oregon Health and Science University. The study’s conclusions, as it’s title declares, is: “Vaccination before or after SARS-CoV-2 infection leads to robust humoral response and antibodies that effectively neutralize variants.”  The study was undertaken before Omicron emerged, but it’s likely the results would be the same for the new variant, one lead co-author, Fikadu Tafesse, was quoted as saying. 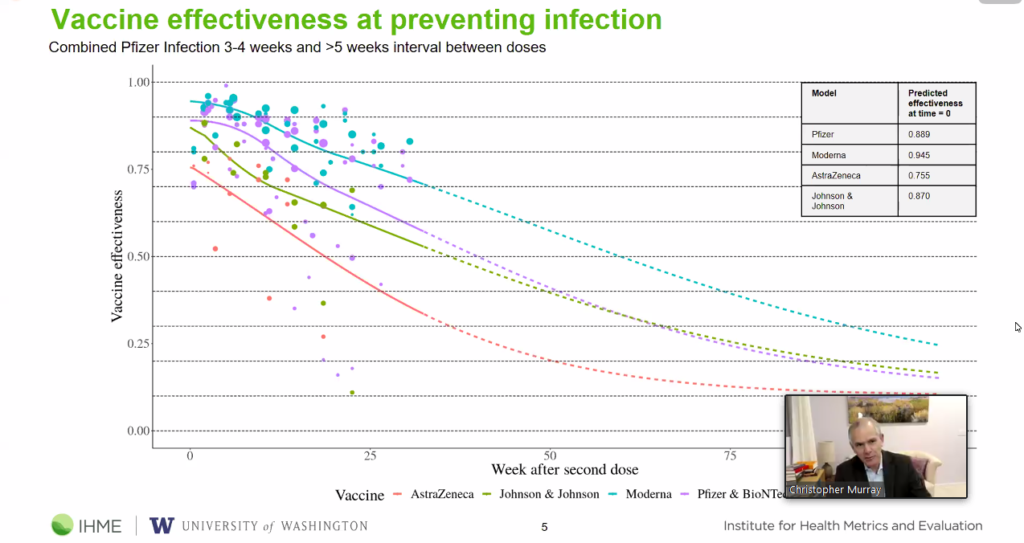 The dilemmas of investment priorities are all the more striking in light of the fact that the world’s currently available COVID vaccines don’t really to much any more to prevent infection – and never were designed for that in the first place, Murray added.

And while two jabs still continue to give protection against serious cases – the returns on that score also have diminished significantly over time – even in the best vaccines.  That has bolstered the argument for a third booser jab – recently recommended by the World Health Organization.”  But even that has proved to be of limited value over time.

As for a fourth dose – since Israel this week extended its approval for any healthy adult to get a fourth Pfizer jab “we shall see” soon how effective that may be.

“But there is a bit  of a debate amongst the vaccinologists about whether the data supports an every six month dosing against the or every periodic dosing,” he cautioned.

“You know that the argument against that is that once you start, you never stop.” 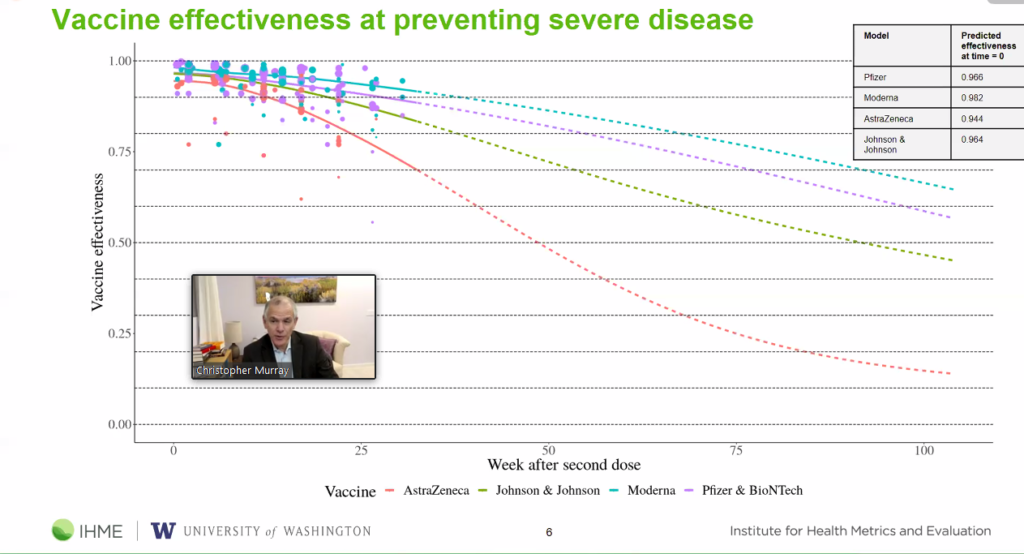 He pointed out that “many governments misinterpreted” the initial results from much trumpeted vaccine clinical trials – confusing results that showed 93% or more protection against symptomatic disease in the Moderna and Pfizer vaccines, per se, as as infection protection.

“They thought that vaccination was a way to control infection.. But in fact the data was never there,” he said, noting that infection prevention was typically not even measured in the clinical trial data.

“Some of the immunologists who were involved in setting up the trails, argued strenuously that we should have had infection as an outcome of the trials It didn’t happen.

“Now you have data post vaccination in Israel, UK, Canada and elsewhere that have given us insights that depending on the variant they (vaccines) provide some protection but not enough to think of vaccination as an infection control strategy. 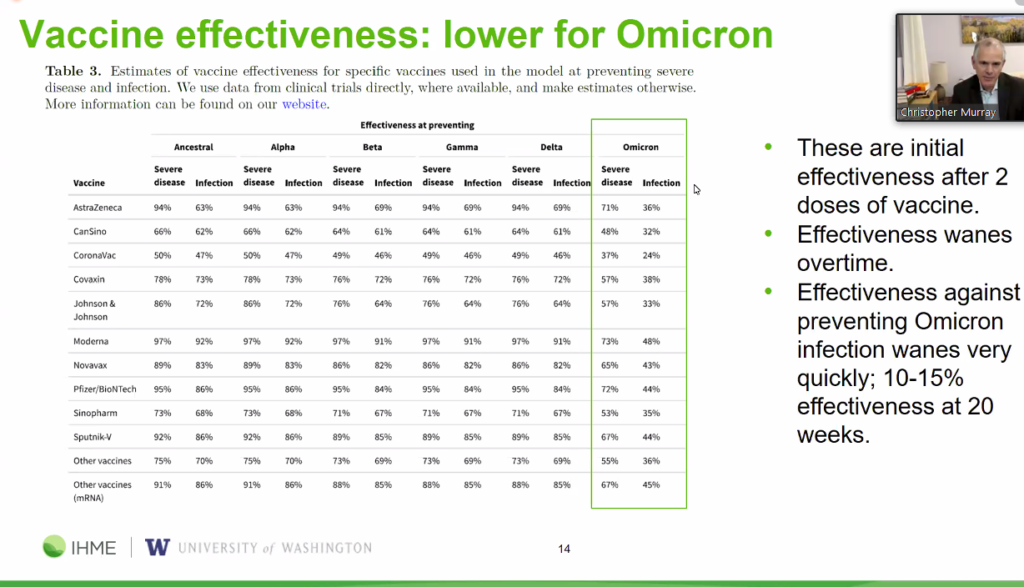 “So as long as we think about vaccination as harm reduction, we’ll be able to figure out the timing to keep protection up, against hospitalization or death.”

Asked by email in another follow-up question whether vaccination can nonetheless blunt the emergence of new variants, Murray did not reply by publication time.

Murray is a former WHO director, who pioneered the Organization’s initial health metrics research over two decades ago, leaving to found IHME, which is funded by the Gates Foundation.

While sometimes considered a rival to WHO’s own standing, the Geneva-based global health agency has become increasingly more dependent on IHME for data, modelling and analyses – which it lacks the capacity to do internally.