The US government has enabled Africa to get access to 50 million Moderna COVID-19 vaccines by giving the continent its place in the vaccine queue, Strive Masiyiwa, head of the African Vaccine Acquisition Trust (AVAT) said on Tuesday.

“This is a time swap arrangement whereby the United States government basically stood aside for the next quarter so that we could access vaccines and purchase them ourselves,” Masiyiwa told a media briefing of the Africa Centers for Disease Control (CDC).

AVAT will get 15 million Moderna doses in December and a further 35 million between January and March. It also has an option to buy 60 million more, delivered at 20 million doses per month, between April and June.

“These doses are being purchased by AVAT courtesy of the United States government, which has been phenomenal in its support,” he added.

Other than a deal with Johnson and Johnson (J&J) for 400 million vaccines over 13 months from August, “none of the vaccine suppliers had any doses for us this year,” said Masiyiwa. 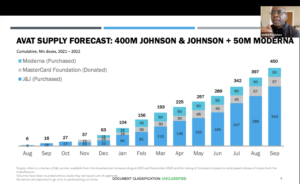 The Africa Union has been able to get the J&J vaccines largely because they are being assembled by Aspen in South Africa – but even ensuring that these doses remained on the continent required reaching an agreement with the European Union, which initially planned to import the African-assembled vaccines.

Jessye Lapenn, the US Ambassador to the African Union, praised AVAT’s leadership and expressed her country’s support for the continent’s vaccination efforts.

The White House confirmed that it would defer the delivery of about 33 million Moderna vaccines to enable the African Union to buy the doses.

Masiyiwa said the African Union’s long-term vision was for Moderna to reach a  fit-and-fill agreement with an African manufacturer.

The company recently announced that it wants to build a $500 million mRNA vaccine manufacturing facility in Africa.

“We recognize that access to COVID-19 vaccines continues to be a challenge in many parts of the world and we remain committed to helping to protect as many people as possible around the globe, said Moderna CEO Stéphane Bancel.

Moderna said that it was “working on plans to allow it to fill doses of its COVID-19 vaccine in Africa as early as 2023, in parallel to building an mRNA vaccine manufacturing facility in Africa”.

Moderna, which received millions of dollars in R&D support from the US government, has been under pressure from the Biden administration to supply low and middle income countries with vaccines.

AVAT is currently supplying 39 African countries and 15 Caribbean countries, but only 8,7% of Africans have had at least one vaccine dose.

Meanwhile, COVAX revealed on Monday that less than 10% of vaccine donations pledged to it by wealthy countries had been delivered.

Joining the Africa CDC press briefing on Tuesday, Berkley said that COVAX had supplied 40% of Africa’s vaccine doses but the facility had experienced a major slowdown after India banned the export of AstraZeneca vaccines made it its country although COVAX had already paid for the vaccines.