As one of the first acts of the new president, inaugurated only yesterday, the United States was rejoining the WHO and joining the global COVAX facility and Act Accelerator, WHO’s platforms for ensuring global access to medicines and vaccines, Fauuci announced. The United States will also cease its “drawdown” of seconded US personnel and honor outstanding financial commitments, which the previous administration had failed to pay.

“The United States will work with the WHO and member states to counter the erosion of major gains in global health, that we have achieved through decades of research collaboration and investments in health and health security including in HIV AIDS. Food Security malaria and epidemic preparedness,” said Fauci, citing the longstanding involvement of the US in the WHO from its foundational days in 1948.

Fauci’s announcement also carried a personal flair, describing his own longtime involvement with WHO and addressing WHO Director General Dr Tedros Adhanom Ghebreyesus as “my dear friend”:

“I also know firsthand the work of WHO, with whom I am engaged in a collaborative manner. Touching all aspects of global health. Over the past four decades. And as such, I am honored to announce that the United States will remain a member of the World Health Organization,” Fauci said.

“Yesterday, President Biden signed letters retracting, the previous administration’s announcement to withdraw from the organization. And those letters have been transmitted to the Secretary General of the United Nations, and to you. Dr. Tedros, my dear friend. also reflected the close working relationships he has maintained over the years with WHO.” 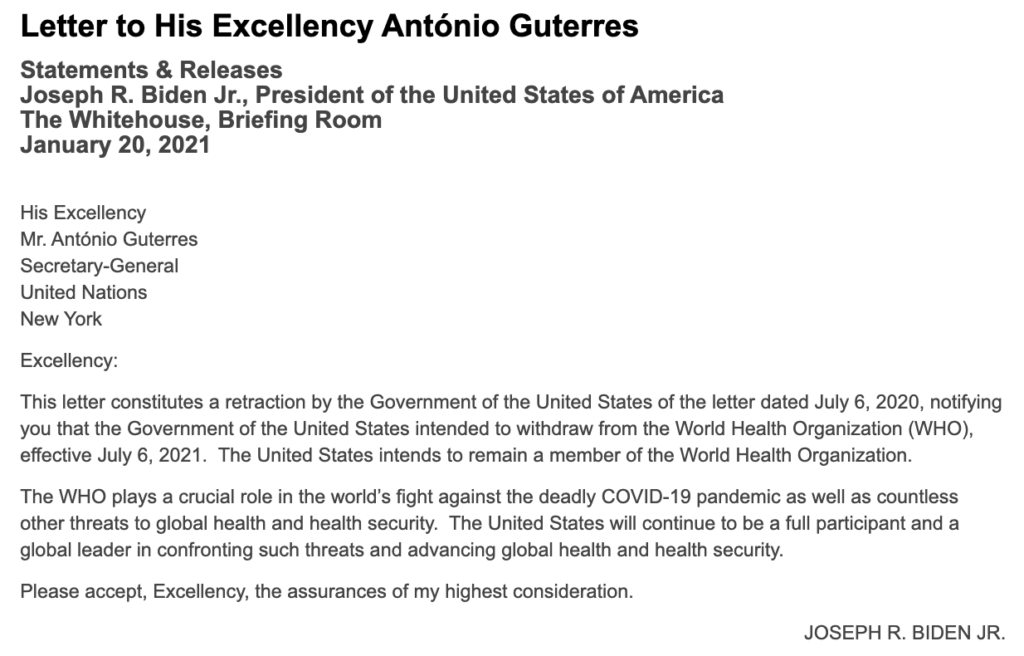 Notably, Fauci also said the new Biden Administration, politically bolstered by a Democratic-controlled Congress, would revoke the 1980-s era “Mexico City Policy”, despised by gender and reproductive health rights advocates around the world.  The 1984 policy of the Reagan-era, which Donald Trump had reinstated and expanded, banned US aid to any foreign NGOS that might be seen as providing any form of abortion assistance.

During the Trump period, the United States abstained from, or opposed, countless WHO and UN resolutions that even indirectly referred to women’s “reproductive health rights” – including a clause in a milestone COVID-19 pandemic response resolution, adopted by the World Health Assesmbly in May.

From Trump Administrations’ Bitter Attacks to Thanks

Fauci’s remarks were also noteworthy for their dramatic U-Turn  in tone from the harsh Trump Administration attacks on WHO seen over the spring and summer,

Rather, Fauci praised the Organization, saying, “I joined my fellow representatives in thanking the World Health Organization for its role in leading the global public health response to this pandemic under trying circumstances.

“This organization has rallied the scientific and research and development community to accelerate vaccines therapies and diagnostics, conducted regular, streamed press briefings that authoritatively track, global developments, providing millions of vital supplies from lab reagents to protective gear to healthcare workers in dozens of countries, and relentlessly worked with nations in their fight against COVID-19.”

But Fauci also said that the US was committed to WHO reform as well as getting to the truth behind the pandemic’s viral sources, saying, “we are committed to transparency, including those events surrounding the early days of the pandemic. It is imperative that we learn and build upon important lessons about how future events can be averted.

“The international investigation must be robust and clear. And we look forward to evaluating it.”

A stronger system of global health pandemic alert and preparedness will be another US priority, Fauci said, saying that the US would work “to strengthen and reform the WHO and improve mechanisms responding to health emergencies, build health security and expand pandemic preparedness:

“”We will seek an improved shared system for early warning and rapid response to emerging biological threats. We will support it scientifically robust and ethically sound collaborative science research and research capacity building, as well  as the rapid pace of research results pathogen samples and data are essential to research progress.””

WHO Executive Board Members Welcome US Statements

Fauci’s comments were welcomed by traditional US allies in the WHO wall-to-wall, including the United Kingdom, The European Union, Norway, Finland and Israel; and in the Western Pacific, Australia, Japan, and New Zealand.

Germany called it “a great day for multilateralism and for WHO.”

Added Austria’s EB delegate, Clements Auer. “This is good news for all of us who regard multilaterlisim as an indispensible strength and not a weakness in our work.”

“We’ve heard on a number of occasions that the only way of overcoming this and other international health emergencies. In the future, is by pooling our efforts,” said Chile. “We’ve underscored the fundamental leadership role of the WHO. And so the renewed commitment of the United States of this organization is important. They’ve also renewed their commitment to multilateralism.

“China has noted the statement made by the US. China reiterates that we firmly advocate multilateralism and we wisupport the WHO to truly play aa scientificy, fair and professional guidance frole in global public heatlh. China welcomes any work that contributes to global solidarity to fight the virus,” said China’s EB delegate.

This is despite the increased level of anti-US rhetoric coming from Beijing.  That rhetoric has pushed conspiracy theories that regard the new mRNA vaccines developed by European and North American pharma companies such as Pfizer and Moderna as dangerous to older people and part of a US military plot.

China has also launched a propaganda campaign that aims to  muddy the waters around the origins of the SARS-CoV-2 virus, just as a WHO-led independent research team visits Wuhan to search for the elusive trail of how the virus, from a family of coronaviruses that circulates among bats in southwestern China, first infected humans in the city of 10 million.  But official Chinese media and spokespeople are now saying that researchers should look in Southeast Asia or Europe – and one China Foreign Ministry spokeswoman speaking a recent media briefing pointed the finger at a US army base.

“My Friend -“My Brother” – Tedros and Fauci Exchange Warm Words

Against that background, US moves to not only rejoin WHO but also play an active leadership role the global health scene – without provoking uneecessary hostility and tension as the Trump Administration was prone to doing, will certainly be welcomed by WHO. And the enthusiastic WHO response was plainly evident in the reception Fauci received on Thursday.

He hearkened back to the historically strong role the United States has played in the global organization.

“The United States, its global role is very very crucial. …. we must work together as one family, to ensure vaccination of health workers and either high risk group is underway in all countries within the first 100 days of 2021 with your commitment. We’re one step closer.

“Since WHO’s founding in 1948. The United States has played a vital role in global health, and the American people have made enormous contributions to the health of the world’s people. We look forward to continuing this partnership. As I know all member states, do we have a lot of work to do.”

The fact that the United States has now committed to join the global vaccine facility, COVAX, which aims to roll out vaccine doses to countries worldwide, is “extremely significant”, Dr Matshidiso Moeti, WHO Regional Director for Africa told Health Policy Watch this afternoon.

“For WHO and for global health, I would say this is indeed a very important and very significant development,” Dr Moeti said, adding, “The US has been one of the biggest partners supporting some major health development actions in Africa – and if we are working with them as the member state of WHO, I believe it facilitates even this bilateral support.”

The honeymoon between WHO staff – and their US counterparts in the incoming Biden administration – was also plainly evident in the back and forth banter on the Twitter channels, in the hours following the Fauci speech.

“Effective leadership is the ultimate ‘vaccine’ against coronavirus,” tweeted WHO special advisor Peter Singer, a Canadian, in a post that featured emojis of the US and UN side by side with hands grasped in thanks.

Replied Colin McIff, Biden’s new Deputy Director of Global Affairs at the Department of Health and Human Services: “Amen brother, we are so much stronger together!”

Amen brother, we are so much stronger together! https://t.co/Ah8dCCAgOG

– Paul Adepoju in Ibadan, Nigeria, contributed to this story