International financial institutions need to extend widespread debt relief to developing countries, and private sector companies need to mend “social contracts” with societies, and in order to “beat climate, beat COVID” fight hunger – and global financial instability, said UN Secretary General António Guterres. He was speaking on the opening day of the World Economic Forum, taking place online this week for the second year in a row, rather than at the posh Alpine ski resort of Davos.

Despite the virtual venue, the messages coming out of the conference were urgent, and at times  frenetic, with Guterres warning of massive economic woes and financial insecurity, as well social unrest and more climate disasters, if developing countries are unable to access sufficient debt relief to recover from the pandemic – and embark on a greener recovery.

“If you fail to provide debt relief and financing to developing countries, we create a lopsided recovery that can send an interconnected global economy into a tailspin,” Guterres warned.

“And if you fail to match climate rhetoric with climate actions, we can then ourselves to a hotter, more volatile hers, with worsening disasters and mass displacement.”

“And at the core of these failures is a global inequities… Without immediate action to support developing countries, inequalities and poverty will be this will result in more social unrest and more violence,” Guterres said.

Earlier in the day, a new WEF Global Risks 2022  report warned about “a world on fire” with climate change, ballooning debt in lower income countries, and linked to that social and food inecurities – while countries still battle pandemic flames.

‘Our planet is on fire and we have to deal with it – this is a risk we know, we are not faced with a blind spot,’ said WEF president Borge Brende at a press briefing early Monday on the new Global Risks report, which tracks perceptions of risk among risk experts as well as world leaders in business, government and civil society.

‘Humans not good in the boiling frog scenario’

We are faced with supply chain challenges, inflationary pressure and looming debt crises. I believe if we’re going to deal with these, with inequality and nature challenges, we need more private-public cooperation,” Brende added, of the report projections.

Others expressed concerns that global solidarity on climate action has been far weaker than what has been seen in the fight against COVID-19 – however the fraught the latter may be with failures, including the lack of adequate vaccine coverage in Africa.

While countries continue reeling financially and socially from the COVID pandemic, “climate action failure and extreme weather events are seen as the most critical long-term risks,” said Peter Giger of the Swiss insurance giant Zurich. “And the strains of combatting the pandemic have limited even more countries’ abilities to respond.

Guterres, meanwhile, called upon countries to ensure that all nations reach the WHO 70% vaccination goal by mid-year – saying high income countries are “shamefully seven times higher than in African countries” in vaccine rates – and “we need vaccine equity now.”

To address the fractures seen at the Glasgow Climate Conference (COP26), he called upon the global community to support public-private “coalitions” that would muster “massive support” for investments in renewable energy, and channel those, along with technologies, to emerging economies.

More action in Asia and Africa, along with momentum in developed economies, is critical to head off a projected 14% rise in climate emissions by 2030 under current scenarios – even if all current climate commitments are met, he asserted.

The aim should be clear, “phase out of coal… no new coal plants,” he said.

“But let’s not go into blame and shame,” he added of countries such as India that have argued that they cannot afford a faster pace of change. “Let’s assist, help the emerging economies to accelerate the transition.

“I’m calling for the creation of coalitions – coalitions with countries, public and private financial institutions, investment funds, and companies that have the technological know-how to provide targeted financial and technical support for every country that needs the systems.

“The governments of Vietnam and Indonesia have just announced their intention to get out of coal and to have a transition to renewable energy. But they need support.

“South Africa now has in place a ‘just energy transition’ with a partnership that involves a number of key countries and international financial institutions to support accelerating their moving out from coal. So we see a clear role for businesses and investors in supporting our net zero role.”

Not everyone has responded positively to his overtures, he admitted, saying that India had “doesn’t like” the idea of a “coalition” very much.

At the same time, he added, “India has accepted several bilateral forms of support. And I’ve been in close contact with the US, the UK and several other countries to make sure that there is a strong project to support India, namely in their investment of 450 gigawatts of solar energy.”

Whatever its name, the net results of such initiatives should be clear Guterres declared: “No new coal plants should be built. This must be a priority for us all.”

“Over the last two decades, the economic toll from climate related disasters skyrocketed by 82%.  Extreme weather in 2021 cost US$120 billion in insured losses and killed 10,000 people.  Climate shocks forced 30 million people to flee their homes in 2020 alone – three times more than those displaced by war and violence.

And one billion children are at an extremely high risk of the impacts of climate change.”

Environmental risks—in particular, “extreme weather” and “climate action failure”—appear as top risks in both the short-, medium-and long-term outlooks, according to the report. 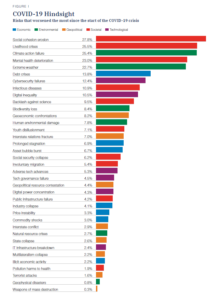 Among the other top findings of the Global Risks report were perceptions that along with health, climate and environment and the debt crisis, a broad range of other social risks have worsened since the start of the pandemic, with “social cohesion erosion”, “livelihood crises” and mental health also taking top spots. Other risks identified included, as having worsened significantly were migration, “cybersecurity failures”, “digital inequality” and an overall “backlash against science”.

Only 11% of respondents thought the world would be characterized by an accelerating global recovery towards 2024, while 89% perceived the short-term outlook to be volatile, fractured, or increasingly catastrophic.

Alongside those, are worries about a looming debt crises and “geoeconomic confrontations” between global and regional powers.

Gutteres also called for expading partnerships between the pharmaceutical industry and lower-income countries to transfer valuable medical know-how needed not only to fight this pandemic – but to prepare better for the future.  But he suggested that should be done voluntarily, through pharma’s voluntary expansion of licenses for vaccines and medical technologies.

“We need pharmaceutical companies to stand in solidarity with developing countries by sharing licenses and new technology. So we can all find a way out of this pandemic,” he added.

He also said that countries need to invest in primary health care, a stronger World Health Organization – and through those systems, “to prepare for the next pandemic.”

“We need to confront the pandemic with equity and fairness,” he stressed. “The last two years have demonstrated a simple but brutal truth if we leave anyone behind. In the end, we leave everyone behind. We fail to vaccinate every person, we give rise to new variants that spread across borders, and bring daily life and economies to a grinding halt.

“This year’s World Economic Forum takes place in the shadow of an enormously difficult period for economies for people and for the planet,” Guterres added in his address. “According to the UN’s economic report released last week, the world is emerging from the depths of a paralyzing economic crisis, but recovery remains fragile,” Guterres said. “

And then even the lingering pandemic, persistent labor market challenges, ongoing supply chain disruptions, rising inflation, and looming debt traps, not to mention the geopolitical divide.

“And as a result, we see recovery slowing down quite substantially. And all of this threatens our own progress in advancing the 2030 agenda, and the Sustainable Development Goals, our key projects.”