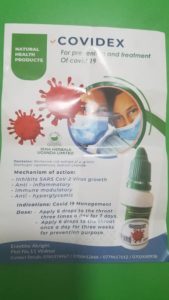 KAMPALA – As Uganda battles its worst COVID-19 outbreak, the  government has called on a researcher who is selling a herbal remedy to treat COVID-19 to provide clinical proof that it works.

Professor Patrick Engeu Ogwang is a renowned researcher in herbal medicines, head of pharmacy at Mbarara University of Science and Technology (MUST) and a former executive member of the Pharmaceutical Society of Uganda.

He is also the founder of the herbal remedy which is being marketed as Covidex, a COVID-19 treatment although there is no proof that it works.

The government has said it is willing to provide financial support to Ogwang to enable Covidex to go through proper clinical trials but that he should present scientific evidence of its efficacy and safety before marketing it as a treatment for the virus.

“He is a very good researcher. We know him very well but he did this particular work alone. He has not shared it with anyone,” said Dr  Monica Musenero, the Presidential Advisor on Epidemics and COVID-19.

“We want to work with him and we are waiting for him to bring evidence. We are even willing to provide him with funding and even patients so that other people other than him tell us if the drug works and is safe,” she added.

With the current second wave of the pandemic and a steep rise in COVID-19 cases, the government says people are desperate and they have a duty to protect the public.

“All we see is information on social media of pictures of people lining up to buy the drug. We are not saying that the vaccine is bad or it does not work or is harmful. We just need evidence. Science is designed in a way that no single individual can claim that something works without convincing a panel of other people,” said Musenero.

“The drug has not gone through clinical trials and as a person working with the World Health Organisation (WHO) I cannot make any more comments about it,” said WHO vaccines medical officer Dr Phiona Atuhebwe. “We all know what happened in Madagascar and Tanzania.”

Dr Ambrose Talisuna, WHO Africa’s team leader on emergency preparedness, said that the remedy must undergo rigorous testing before being rolled out on the market.

“People are gullible in a situation like this where there is a pandemic. My recommendation is for the Professor to take his drug through rigorous testing,” said Talisuna.

Meanwhile, the Pharmaceutical Society of Uganda (PSU) has applauded Ogwang’s efforts to develop Covidex “considering that no proven cure for the pandemic has yet been established globally”.

The PSU says it will stand by Ogwang and has already put in place a taskforce to provide him with technical support to develop Covidex in compliance with the established guidelines for research and development of herbal medicines.

The PSU also said that it is engaging with Uganda’s drug regulatory body, the National Drug Authority (NDA), to ensure support for Ogwang.

No Approval Given for Covidex, says NDA

However, the NDA warned the public against using Covidex: “Uganda Drug Authority (NDA) has learnt with concern the promotion and sale of Covidex manufactured by Jena Herbals (U) Ltd that claims to prevent and treat COVID-19.”

“NDA informs the public that it has not undertaken any assessment or approved Covidex, nor has it received any application from the innovator of the Covidex as required by National Drug Policy and Act cap 206,” said the NDA’s public relations manager, Abiaz Rwamwiri.

The NDA has authorized a number of products from Jena Herbals, including an anti-malaria product, and notes that the company is aware of the process required for clinical trials, authorization, drug promotion and licensing before production and sale of herbal medicine.

The NDA confirmed that it had met a team from Jena Herbals led by Ogwang and it had agreed to follow these necessary processes.

After the meeting, Ogwang issued a statement saying that more proof was needed that Covidex worked to relieve the symptoms of COVID-19, and that the agency had advised him ti change the product;s name so it could not be associated with COVID-19.

Ogwang told Health Policy Watch that his team was busy writing the clinical trial protocol which will be presented to the government.

Earlier in this week there was a rush to buy Covidex and social media exchanges heightened after the statements from the government said it wanted scientific evidence. 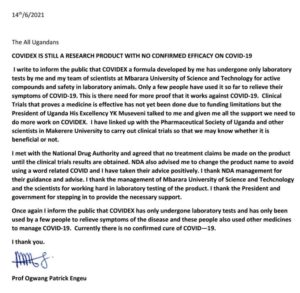 Related
China Rejects WHO Plan for Next Phase of COVID Origins Investigation
COVID-19
WTO Identifies Bottlenecks to COVID Products Ahead of Key Meeting with WHO
COVID-19
Indonesia Becomes Epicenter of COVID Pandemic, as Southeast Asia is Battered by Third Wave
COVID-19

Related
China Rejects WHO Plan for Next Phase of COVID Origins Investigation
COVID-19
WTO Identifies Bottlenecks to COVID Products Ahead of Key Meeting with WHO
COVID-19
Indonesia Becomes Epicenter of COVID Pandemic, as Southeast Asia is Battered by Third Wave
COVID-19