Millions of sanitation workers in the developing world are forced to work in toxic conditions, coming into direct contact with human waste and toxic chemicals, with little to no pay or legal protections. Sanitation workers provide essential public services, yet are often the most marginalized, poor, and discriminated against members of society.

These are the main findings of a new report, Health, Safety, and Dignity of Sanitation Workers, released Thursday by the World Health Organization, International Labour Organisation, WaterAid, and the World Bank. The report examines case studies of sanitation workers’ conditions in nine countries – Bangladesh, Bolivia, Bukina Faso, Haiti, India, Kenya, Senegal, South Africa, and Uganda – and is the most extensive study of sanitation workers’ occupational conditions and livelihoods to date.

“A fundamental principle of health is “first do no harm.” Sanitation workers make a key contribution to public health around the world – but in so doing, put their own health at risk. This is unacceptable,” said Dr Maria Neira, director of WHO’s Department of Public Health and Environment in a press release. “We must improve working conditions for these people and strengthen the sanitation workforce, so we can meet global water and sanitation targets.”

Meanwhile, a report published by OECD on the same day found that antibiotics and other pharmaceutical residues are being discharged into freshwater systems through untreated household wastewater and runoff from municipal wastewater treatment plants – throwing ecosystems out of balance and potentially exacerbating the problem of growing drug resistance in deadly bacterial, fungal, and viral diseases.

Sanitation workers provide key public health services such as cleaning public toilets, emptying pits and septic tanks, cleaning sewers and manholes, and transporting fecal sludge. Workers are often exposed to a number of hazardous chemicals or diseases such as cholera in untreated waste or water, the WHO report finds.

Many sanitation workers work informally for little pay, and have few legal or social protections. The work is often stigmatized and done at night with little lighting or protective equipment, increasing the occupational risks to the job. While there are few statistics on how many sanitation workers there are around the world, the report estimates that one sanitation worker dies every five days in the sewers of India.

Still, report ends on a positive note, highlighting examples of countries such as South Africa where sanitation work is more formalized and protected under national labor standards and explaining next steps that can be taken to improve the health, dignity, and autonomy of sanitation workers.

Despite the horrid working conditions, sanitation work is an essential public health service, and the workers themselves know it. The report quotes workers like Senzi Dumakude, a sewage blockage crew member in South Africa, who says, “I enjoy serving the community, making sure that our city is clean… We are making sure it is safe.”

While some sanitation workers are public or private employees that have benefits and clear legal protections, a number of people work informally, for little to no pay in ghastly conditions exposing workers to a number of health hazards. The WHO report found four key challenges and risks to sanitation workers: 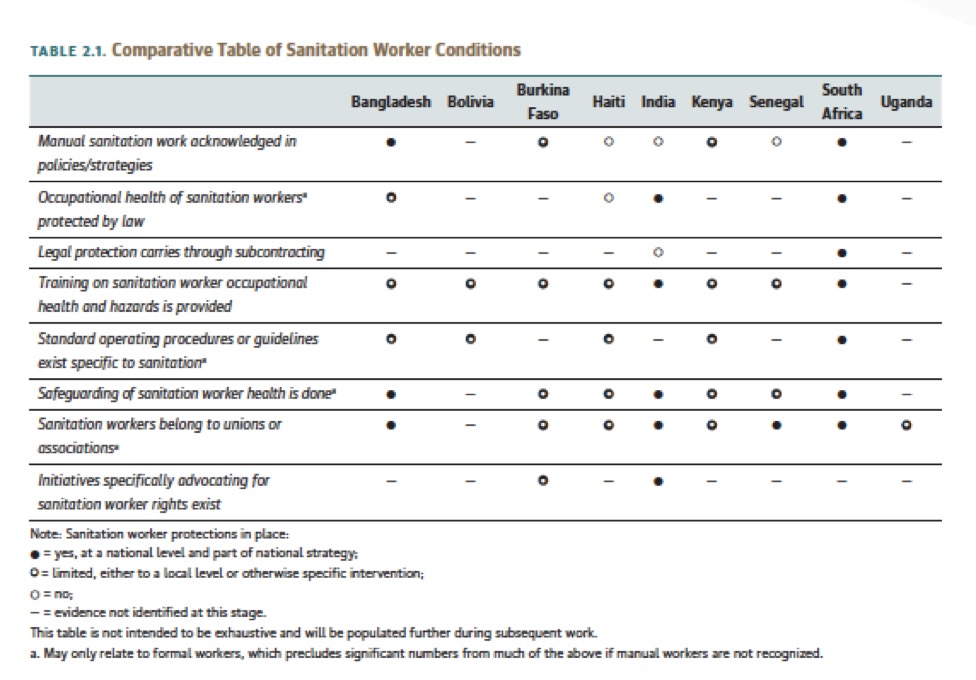 The report highlights so-called “manual emptiers” as a particularly vulnerable class of workers. These laborers are responsible for emptying pits, cleaning toilets or sewers with little to no protective clothing, and often use buckets, ropes, and shovels for their work. Some workers can only use their hands and feet. Efforts to ban manual emptying have driven the practice underground, where workers have even fewer protections in the informal sector.

Sanitation workers who are not protected by adequate health and safety measures are at high risk of health problems. Dizziness, fever, cholera, hepatitis, and polio, along with physical trauma such as puncture wounds and cuts, back pain, and death by asphyxiation from noxious gases have all been directly associated with unprotected sanitation work, the report notes.

Countries such as Bangladesh and South Africa have formalized the sanitation sector, which represents a huge step in protection sanitation workers. To protect the health and safety of sanitation workers, the report recommends five good practices:

Antibiotic Residues In The Environment Could Contribute To AMR

Antibiotics and other pharmaceutical residues are being found in water systems around the world, with untreated wastewater as a primary source of these runoffs. An OECD report, Pharmaceutical Residues in Freshwater: Hazards and Policy Responses, released Thursday pointed to a growing prevalence of pharmaceutical residues in the environment, citing studies that show residues from up to 200 different compounds have been found in parts of the world. The report cited a forthcoming study that found antibiotics in 65% of 711 river sites in 72 countries.

In 111 of the sites, the concentrations of antibiotics exceeded safe levels, with the worst cases more than 300 times over the safe limit set by the AMR Industry Alliance. The over-use and mis-use of antibiotics is greatly associated with growing antimicrobial resistance, as continued exposure to antibiotics may enable bacteria to evolve new genes resistant to the drugs.

Drug-resistant infections are currently estimated to cause 700,000 deaths annually, and an AMR review commissioned by the UK Prime Minister estimates that AMR-related deaths could increase to 10 million per year by 2050.