Some 21 countries have now ratified the African Medicines Agency treaty – well beyond the 15 ratifications reached in November 2021, which allowed the AMA treaty instrument to formally take effect.

Egypt, Africa’s third most populous country, is the most recent state to have both ratified and deposited the treaty – marking a significant milestone in the efforts to get the continent’s bigger players on board.

Altogether, 19 African countries have both ratified and deposited the AMA treaty instrument to the AU secretariat, said Cessouma Minata Samate, African Union Commissioner for Health, Humanitarian Affairs and Social Development, at a press briefing on Thursday. She was speaking at a briefing on the margins of the 35th African Union Summit, which takes place this weekend.

Two more countries,  Morocco and Saharawi, have also ratified the treaty – but are yet to deposit it – rounding out the 21.

Another nine countries have signed the treaty, but are yet to ratify it – including Equatorial Guinea and Comoros, which signed over just the past week, said Samate.

All in all, that makes for a total of 30 countries that are formally on board with the treaty through signature, ratification, or both – while 25 still remain uncommitted.

The new agency is supposed to provide a streamlined regulatory authority that would improve quality medicines access, and combat substandard imports, backers say.

“The AMA will also guide the regulation of medicines, and facilitate access to quality medicines on the continent,” underlined Samate. 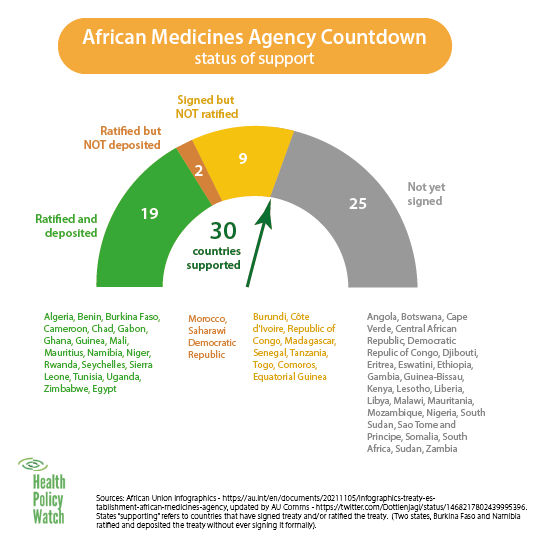 Despite that promise, the 25 countries that have not yet signed the treaty include most of Africa’s population and economic powerhouses — such as Nigeria, South Africa, Kenya and Ethiopia.

Responding to queries regarding the fence-sitters, Samate deferred, attributing the delays to  variations in respective countries’ signing and ratification procedures.

“I do not want to answer why Ethiopia did not sign; I am not part of the government. But each country has its procedure. There are several procedures involved. There is a whole process for it to arrive at the Parliament which will ratify it, and it depends on each country,” she said.

“Each country has its rules for signing and ratifying treaties,” she said.

She however added that since the treaty is new, sufficient time has to be given to Member States to sign and ratify it. Ultimately, however, all member states recognise it is in the best interest of citizens on the continent.

“I am sure that all the countries are committed.”

AMA will improve medicines regulation and access on the continent

Samate noted that the AMA will be important in coordinating between the continent’s sub regional blocs, which have different economic alliances, also affecting trade and thereby medicines regulations.

“The agency will coordinate the actors at the level of our subregional economic communities, and will work with AU Member States to enable us to have efficient health systems to treat our various populations.”

“It’s important for us to have an agency for ourselves – to serve as a regulator for medicines issues on the continent,” she said.

Others have emphasized that the AMA could help speed access to medicines – by conducting reviews and issuing recommendations on new treatments, which could take counties much longer to tackle individually.  And it could help bring down some medicines prices by facilitating regulatory harmonization – which permits more bulk imports.

In addition, it is hoped that the agency can play a role in fighting substandard and fake medicines. Currently WHO’s African Region suffers from the highest rates of reports of fake and substandard medicines in the world, according to both the WHO and AU officials.

Timeline for setting up the new agency

The next step in transforming the AMA from a treaty to an actual institution is to decide on a host country for the agency’s headquarters, Samate told journalists.

This is not expected to be completed at the AU Summit – insofar as the criteria and process are yet to be announced. But she affirmed that the process would get underway “very shortly.”

“There will be a process to allow the member states to decide, very shortly, which African country will host the AMA,” she told journalists.

Sources, however, told Health Policy Watch that the process of assessing countries vying to host the AMA may not really begin until April.

However an initial meeting of the AMA Conference of State Parties (CoSP) is scheduled for May – where an assessment report will be presented for discussion on recommendations for AMA host country.

Following that, the terms of reference for the AMA Director-General will then be considered by the CoSP – to pave the way for recruitment of an agency head. Lastly, the site for the proposed AMA headquarters is expected to be adopted by the AU Assembly to be held in July 2022.

The AMA treaty document was first approved by the African Union in 2019. At a two-day meeting of the Partnership for Africa Vaccine Manufacturing (PAVM) hosted by Rwanda in December 2021, panellists described the AMA as critical to Africa achieving the set goal of producing 60% of vaccines on its own soil by 2040.

Ahead of the African Union Summit held over the past weekend, the African Medicines Agency Treaty Alliance (AMATA), an alliance that represents patients, academia, civil society, and industry set up to advocate for the ratification and implementation of the AMA, applauded the momentum reached so far.

As the 35th #AUSummit takes place, we as #AMATA members call on the @_AfricanUnion to now prepare for the practical implementation of the Treaty establishing the #AfricanMedicinesAgency, bringing Africa🌍a step closer to having a continent-wide regulatory agency! pic.twitter.com/x8K1aORGZN

They called for a set of key steps to be taken in order to operationalise the Agency, including setting up a secretariat and choosing its location, adequate human resource capacity to operationalise its mandate and a sustainable funding model to ensure short- and long-term stability.

AMATA also stressed the importance of recognizing patients as key partners in the development of the Agency – as part of a framework of engagement with non-state actors, including academia, research bodies, private sector and other civil society groups.

They also appealed to all other African countries to ratify the AMA to “strengthen the continent’s capacity and preparedness to deal with future pandemics”, foster a spirit of cooperation to enable the development of medicines and vaccines, and safeguard the health of the continent and to protect citizens of Africa from fake m.