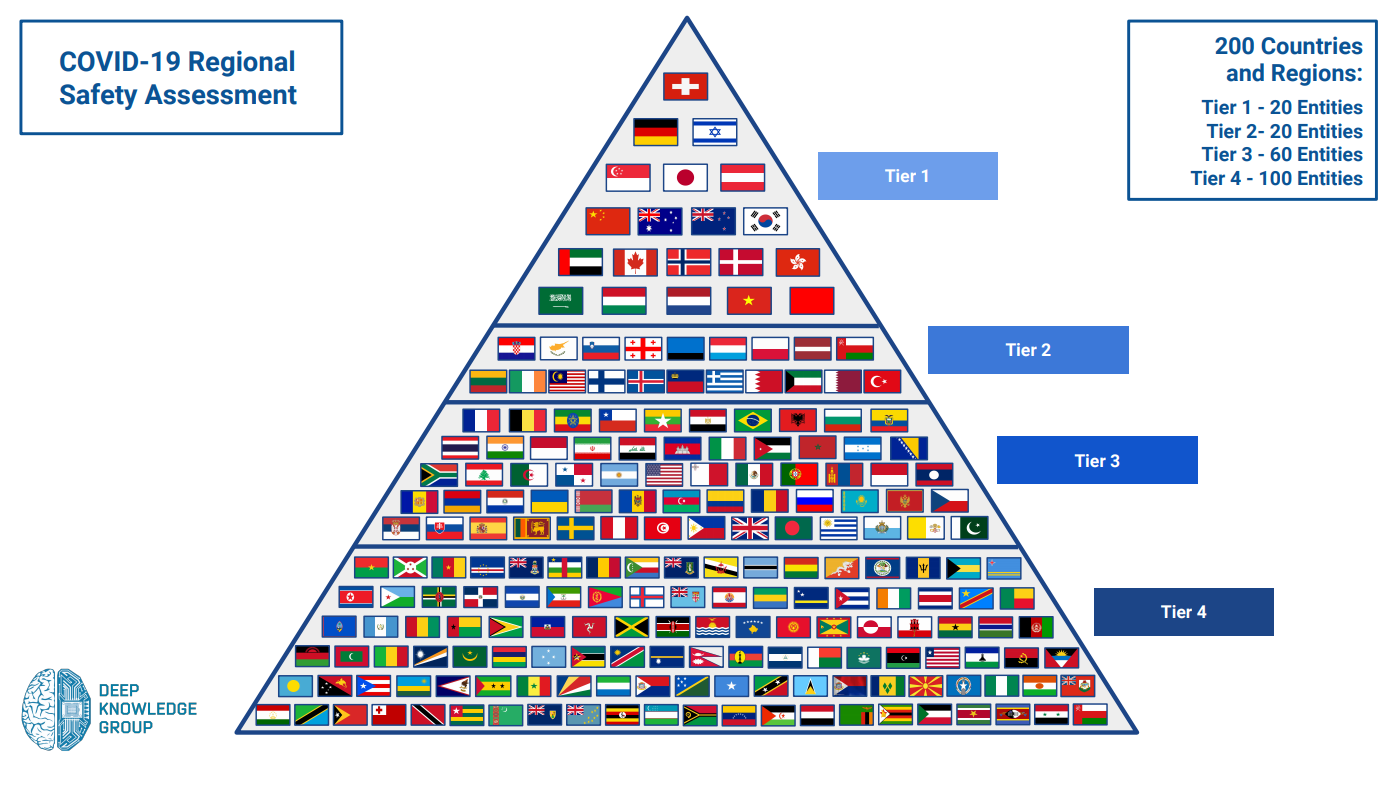 Switzerland is now the world’s safest country since the pandemic started, followed by Germany and Israel, according to a Regional Safety Assessment of 200 territories and regions during the COVID-19 pandemic.

Overall, Asia and Europe were the regions most successful in fighting the coronavirus although there were wide variations within Europe in terms of how countries really performed, according to the report by Deep Knowledge Group, an international consortium of commercial and non-profit organizations that applies progressive data-driven solutions to healthcare.

Said the report: “On average, Asia and Europe appear to be maintaining regional safety more efficiently than the rest of the world.” 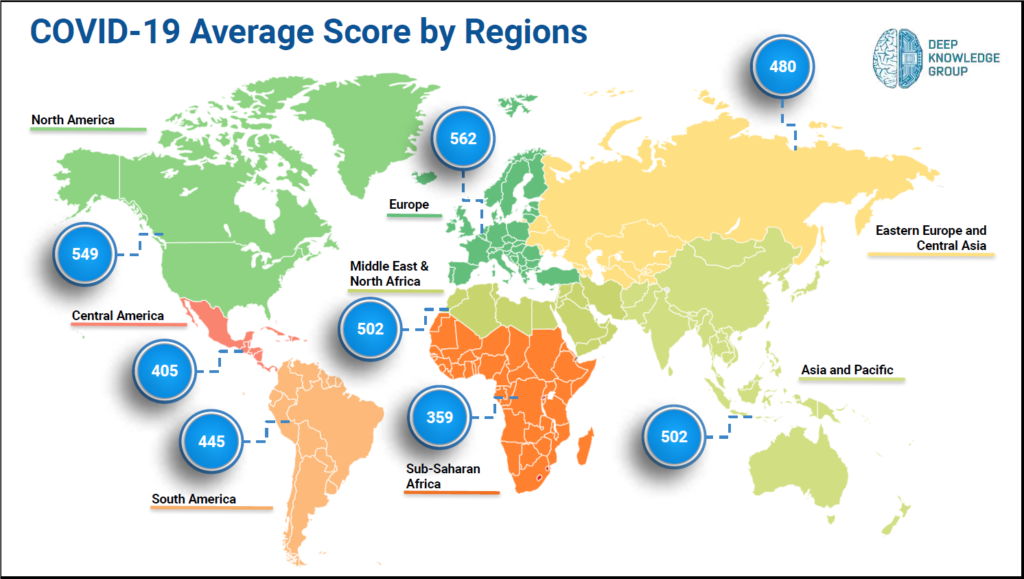 The study offers policymakers an opportunity to assess and improve their COVID-19 responses by learning from their neighbours, and reveals why some countries fared better than others in the worldwide scramble to curb the pandemic.

The quality of specific governmental policies designed to combat the pandemic were a bigger key to success than the quality of its healthcare system in ‘non-pandemic times’, the study found.

The ‘most critical’ finding of the study is that countries should avoid reckless reopenings in the name of short-term economic recovery, or “all the sacrifices” made will have been meaningless”, the reports authors also warned.

By compiling some eleven thousand data points from over 500 reputable, publicly available sources of data, researchers created a Regional Safety Index – A composite index that ranked, categorized and analyzed health system preparedness of about 200 regions.

The Regional Safety Index is based on a range of social, economic and health indicators, as well as six categories, including – quarantine efficiency; government efficiency of risk management; monitoring and detection; health readiness; regional resilience; and emergency preparedness.

Switzerland, Germany and Israel ranked ‘exceptionally high’ in the risk assessment, with scores hovering around 750, in comparison to the USA, the UK and France – which performed “much less favourably” than expected given the sophistication of their health systems, at about 530 on the Regional Safety Index. 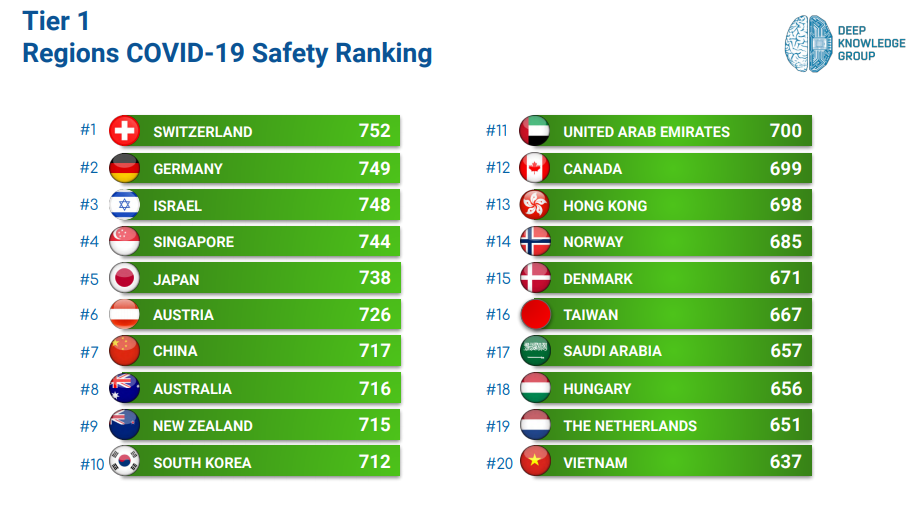 Strikingly, while the European and Asian countries that scored well on the index all have good healthcare systems, the sophistication of the health system was less a predictor of success than might be expected. What was ‘critical’, the study reported, was  timely adoption of evidence-based policies:

“One of the most critical factors impacting regional safety and stability is not the general level of healthcare sophistication in non-pandemic times, but the specific governmental crisis management strategies and policies used to combat pandemics.”

But countries that successfully curbed the pandemic shared a handful of common features, mainly health systems that operate with high levels of emergency preparedness, which enabled: early and proactive government responses; quick and efficient testing, tracing and isolating efforts to prevent overburdening of healthcare systems; and rapid resource mobilization. Such countries include Switzerland, Germany, Israel, Singapore and Japan.

Another similarity between high-performing countries on the Index was a ‘cautious’, evidence-based unfreezing of lockdowns without sacrificing public health and safety. 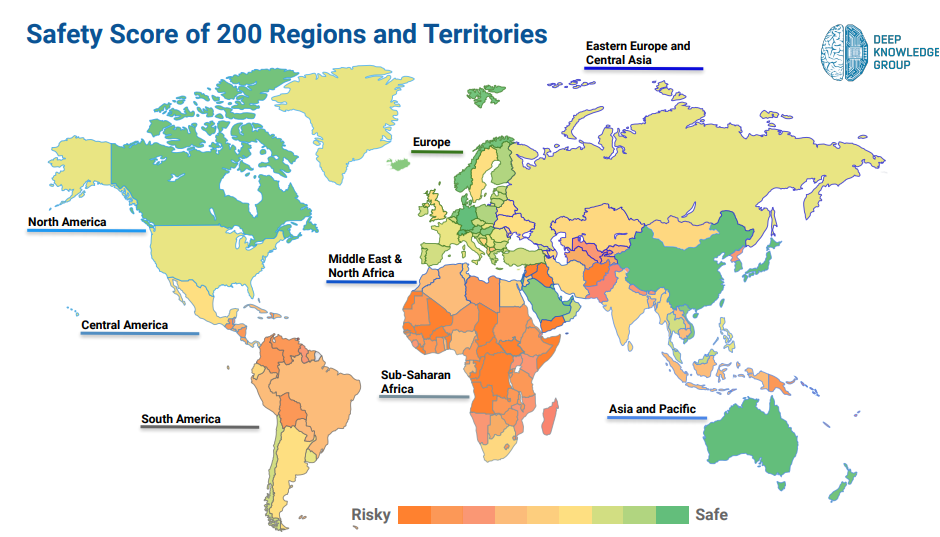 In contrast, while technological and economic superpowers like the United Kingdom, the United States and France have very sophisticated healthcare systems, they were ‘surprising outliers’ faring much worse in the ratings “than expected by any basic logic”, the study reported:

“We do see a number of so-called outliers in the [European] region as well, i.e., countries who should score well given their generally high degrees of healthcare robustness, such as France and especially the United Kingdom, but which do not,” said the authors. These countries also were among those that suffered from “the highest infection spread and mortality rates, which is a surprising result.”

Significantly, some lower-middle and middle-income ranked better than others as well.  For instance, South Africa and India, as well as Argentina, Uruguay and Ecuador, in Latin America, ranked higher than other neighbours in their region of similar socio-economic levels.

Countries that were battered by the coronavirus have also started to unfreeze lockdowns too fast, warned last week’s study – The “most critical risk” is reckless prioritization of economic concerns over healthcare priorities without the necessary increases in testing, tracing and isolation:

“Above all else, regions should not put economic recovery above public health and safety…or all the sacrifice and joint work of citizens, governments and organizations will have been meaningless,” states the report.

While countries such as the United Kingdom have erred more on the side of caution since Prime Minister Boris Johnson himself was briefly hospitalized in an intensive care ward for COVID-19 in early April, US President Donald Trump has been adamant about reopening business across the United States, regardless of infection trends, in an attempt to revive the economy.