In light of millions of smokers attempting to quit the vice during the COVID-19 pandemic, the industry has employed ‘very mean’, ‘very subtle’ and ‘very targeted’ tactics to hook young populations to “deadly’ tobacco products, according to WHO experts.

“The tobacco industry understands what they’re doing, they’re targeting these children and adolescents. And that’s deliberate. It’s not a mistake [and] what they do is deadly,” WHO’s Director of the Health Promotion Department Ruediger Krech, said at a webinar on Thursday’s  “World No Tobacco Day” which drew attention to preventing the 8 million premature deaths from tobacco every year.

Krech presented the WHO’s new toolkit to empower young people to make their own decision on tobacco products.

Now, more than ever, there’s a “huge potential” for the tobacco industry to “hook our children to tobacco products” – mainly through advertising, promotion and sponsorship of tobacco products – which has a “direct impact on tobacco consumption,” said Adriana Blanco Marquizo, Head of the WHO’s Framework Convention on Tobacco Control (FCTC) Convention Secretariat, and another panelist at Thursday’s webinar.

“Every day or every week,” new tobacco products and e-cigarette devices are rolled-out by the tobacco industry – with “more and more flavors and more tactics”, said Krech, as he warned that 9 out of 10 of smokers start consuming tobacco products before they are 18 years old.

And as “hundreds of thousands” of smokers from ‘many countries’ have committed to quit smoking since the COVID-19 crisis began, the tobacco industry is scrambling to find new ways of marketing their products, reported Vinayak Prasad, Coordinator of WHO’s No Tobacco Unit. These countries include Mexico, India, China, Timor Leste, Philippines, Kazakhstan, Tajikistan and Kyrgyzstan.

Since the raging pandemic started, the WHO has noticed new tactics – ranging from tobacco manufacturers emblazoning their trademark on “free masks”, to suing countries like South Africa as they halt tobacco sales in the midst of lockdowns.

As Tobacco Market Grows, ‘We May Lose Ground In Tobacco Control’ As Industry Is Eager To Hook Adolescents

We may lose ground in tobacco control as the industry is looking to hook a younger generation to its products, warned Krech – With a ‘huge increase’ in the number of adolescents that are smoking in past years.

And the market for tobacco products is increasing, apart from a handful of countries: the US, UK, France, and China, said Vinay.

Currently, some 44 million children and adolescents are smokers, though 100 million smokers began before the age of 15, said Krech. And over 14 million young people aged 13-15 have already started to use tobacco.

However, these numbers “don’t even begin to scratch the surface of young tobacco users”, mainly because there is no solid data on children below the age of 13, said Krech.

And smoking is “obviously not starting at the age of 13,” according to Prasad. In some cases, it starts earlier.

Every hour, the tobacco industry spends a million dollars on advertising, and $ 9 billion every year, said Prasad on Thursday.

Heated tobacco products account for about half a percent of the world’s market, 80% of which is in the developing world – with over 400 million smokeless tobacco users In the South East Asian context, said Prasad.

As COVID-19 Rages On, Tobacco Industry Shift Tactics In Efforts To Maintain Sales

The tobacco industry has a long history of using all sorts of tactics that oppose “all forms of evidence-based measures” to reduce tobacco use, said Prasad – ranging from direct to indirect forms of advertisements, sponsorships or promotions, some of them “very subtle.”

And as the industry scrambles to maintain profits during the raging pandemic, health experts have seen some of their tactics change.

In South Africa and Bangladesh, the tobacco industry is lobbying lockdowns to lift the existing sale ban on tobacco products. The industry is using ‘all kinds of arguments’ to support their claims – They have even argued that smokers that are unable to get their products are ‘victims’, said Prasad.

In South Africa, the industry is fighting a case in Supreme Court to lift the sale ban on tobacco products since the country imposed a 21-day lockdown in late March. In Bangladesh, a similar challenge is being fought as “the current law has not made it essential to sell tobacco products,” he added.

The tobacco industry also uses other strategies to entice adolescents to consume their products – a tasty selection of flavors like bubblegum, as well as bringing cigarette representatives into schools to present their products.

On-screen smoking is another common but highly effective tactic to promote smoking in younger populations, warns the WHO.

In a British study of over 5000 adolescents 15-year-olds who saw more films with smoking imagery were almost three quarters more likely to have tried smoking than those who had seen movies where people smoked less. In the USA, almost 40% of all new young smokers begin as a consequence of seeing smoking on TV, reported another study.

Pulling out smoking from youth-rated films is “one of the most powerful ways to protect children from the harms of smoking,” said programme manager of WHO’s Tobacco Free Initiative Armando Peruga, in a WHO bulletin from 2016.

In light of the tobacco industry’s tactics to promote smoking in teenagers, the WHO has launched a novel, interactive toolkit for youth between 13-17 years of age.

The aim of the toolkit is to provide children with the tools “to say no” to the tobacco and nicotine industry:

“Adolescents and young people can be empowered to protect themselves when they understand the intention of [the tobacco] industry…that really wants them hooked and addicted in order to keep the profits, even if it goes against public health,” said Marquizo.

The toolkit offers different activities for teachers in classrooms, but also for parents at home, either in-person or virtually – ranging from a tobacco mythbuster quiz, a ‘how to sell death’ workshop to expose tobacco industry tactics, or even roleplay for teenagers to practice refusing tobacco products when offered by their peers or others.

The campaign is ‘very much’ based on social media because the tobacco industry’s tactics often hook teenagers through social media, said Krech.

Claims That Tobacco Is Helpful Against COVID-19 Are Unfounded, Warns WHO

“ We [adolescents] are the new lab rats to big tobacco…We don’t know what they’re putting in their cigarettes that might affect us 10-20 years from now…before, tobacco was promoted as a good thing, a healthy thing.” said Youth Representative for Students Working Against Tobacco Nicholas Martinez, who also spoke at Thursday’s webinar.

“But now, we know the real consequences of it,” he added.

Last month, two linked Parisian studies put forth claims that nicotine in tobacco products could protect against COVID-19 infection, leading to panic buying in Iran -And also a decree by the French government to limit the sale of nicotine products.

However, these studies were ‘not peer-reviewed’ and had ‘huge methodological weaknesses,’ said Krech.

“There is currently insufficient information to confirm any link between tobacco or nicotine in the prevention or treatment of COVID-19. WHO urges researchers, scientists and the media to be cautious about amplifying unproven claims that tobacco or nicotine could reduce the risk of COVID-19,” said a WHO statement from mid-May.

The WHO’s review of the latest evidence ”shows exactly the opposite’ result to the Parisian studies, warned Krech, as he referred to this week’s review of 27 observational studies and 8 meta-analyses published by the WHO.

It has long been acknowledged that smoking impairs lung function and the body’s ability to fight off diseases. It also increases the severity of respiratory diseases – including COVID-19 – according to a review last month by public health experts convened by WHO.

And while the effect of smoking on COVID-19 infection has not been confirmed in peer-reviewed studies, smokers “may be more vulnerable” to COVID-19 infection as the act of smoking increases the likelihood that a virus will transmit from hand to mouth,” warns the WHO – especially because smokers may share products between each other:

“Smoking waterpipes, also known as shisha or hookah, often involves the sharing of mouth pieces and hoses, which could facilitate the transmission of the COVID-19 virus in communal and social settings,” said the WHO in a Q&A on tobacco and COVID-19 on Wednesday. 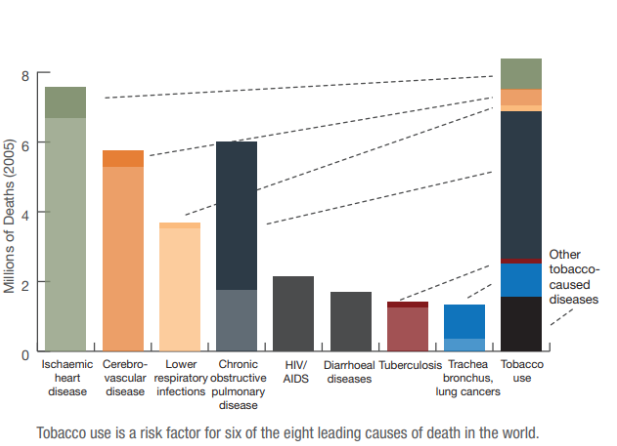 There is another link between smoking and COVID-19 illness – Non Communicable Diseases (NCDs) like cardiovascular disease, cancer, respiratory disease and diabetes.

While there are currently no peer-reviewed studies that directly estimate the risk of hospitalization with COVID-19 among smokers, it is likely that smoking worsens COVID-19 outcomes, reports the WHO.