The world is experiencing a record-breaking surge in wildfires, downward trends in crop production, unprecedented heat waves, and a rise in infectious diseases as a result of the unabated pace of climate change – affecting the health and safety of hundreds of millions of people worldwide. However, dramatic action now could still keep the global average temperature rise to below 2 degrees Celsius if bold new, approaches are taken.

These are among the main findings of the annual Lancet Countdown on Health and Climate Change, one of the most comprehensive scientific reviews of the ongoing effects on health of climate change. The report collates data on some 41 key climate and health indicators culled from studies by 35 academic and research institutions and 120 experts worldwide, to lay out the lifelong health consequences of rising temperatures should the world follow a “business-as-usual” pattern.

This year, the accelerating impacts of climate change have become clearer than ever”, said Professor Hugh Montgomery, co-chair of The Lancet Countdown and director of the Institute for Human Health and Performance at University College London in a press release. “The highest recorded temperatures in Western Europe and wildfires in Siberia, Queensland, and California triggered asthma, respiratory infections and heat stroke.”

But while the world is already seeing the very immediate health impacts from climate change in terms of greater exposures to heatwaves, wildfires, and extreme weather, as well as greater food insecurity, the lion’s share of the health burden will fall on the younger and future generations, the report warns. Children born today could be threatened by even more widespread food insecurity, even greater increased risks of infectious diseases, and lasting health effects from environmental pollution related to climate change.

“Children are particularly vulnerable to the health risks of a changing climate. Their bodies and immune systems are still developing, leaving them more susceptible to disease and environmental pollutants,” says Dr Nick Watts, executive director of The Countdown.

If global action against climate change isn’t accelerated, average global temperatures could rise between 4-7 degrees Celsius by the end of the century, according to the report. However, a 7.4% year-on-year reduction in fossil fuel-related CO2 emissions starting between 2019 to 2050 could still limit global warming to under 1.5 degrees Celsius by 2050, the report concludes. Limiting global warming to 1.5 Celsius is one of the goals outlined in the 2015 Paris Agreement.

Sobering Trends and a Glimmer of Hope

Among the most sobering trends, the Countdown notes the following: 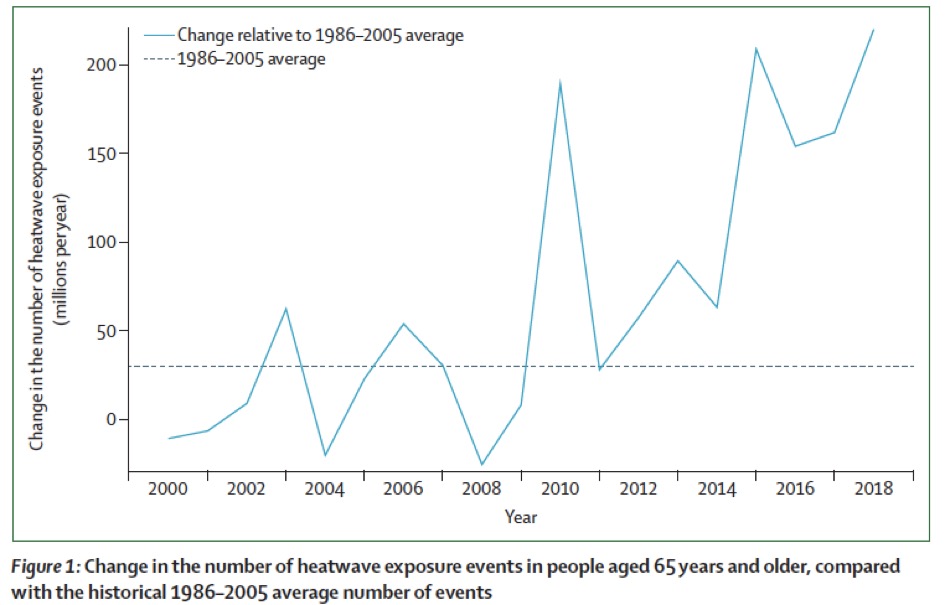 Despite this gloomy outlook, the Countdown report finds positive trends as well, which could be the basis for slowing warming, if these picked up momentum.

For instance, despite a small increase in total coal use in 2018, in key countries such as China coal’s share in electricity generation has declined.

Global per capita use of electric vehicles increased by 20.6% between 2015 and 2016, and now represents 1.8% of China’s total transportation fuel use.

Improvements in air pollution seen in Europe from 2015 to 2016 could lead to significant reductions in air pollution-related illness and disability if trends are maintained over the course of the average lifetime, potentially saving economies up to €5.2 billion annually.

And cities and health systems are becoming more resilient to the effects of climate change; about 50% of countries and 69% of cities surveyed reported efforts to conduct national health adaptation plans or climate change risk assessments.

However the positive trends are nowhere strong enough at present to blunt the continued increase in climate emissions. Bold new actions are required to keep global warming below 2 degrees Celsius, the report says. The health impacts of climate change can be mitigated by four key actions:

Authors of the report point to the upcoming COP25 Climate Change Conference in Madrid (2-13 December) and a growing global movement against climate change, led by young people as catalysts for more assertive action.

Co-Author Dr. Stella Hartinger was quoted in The Countdown’s press release saying, “We must listen to the millions of young people who have led the wave of school strikes for urgent action. It will take the work of the 7.5 billion people currently alive to ensure that the health of a child born today isn’t defined by a changing climate.”

For more information about the 2019 Report, its findings and policy implications, see the Lancet Countdown’s Resources Page.