CAPE TOWN – While much is still unknown about Omicron, the new COVID-19 variant, South African health officials are “optimistic” that the current vaccines will continue to offer protection against severe illness and death.

Speaking from Gauteng province, South Africa’s economic hub and the place where Omicron was first sequenced, Dr Mary Kawonga told a media briefing on Thursday that “analysis is continuing but we are optimistic”.

Hospitalisations are lower than at a similar point in the province’s previous COVID-19 wave, which was driven by the Delta variant, said Kawonga, a public medicine specialist who made a presentation on behalf of the Gauteng Premier’s COVID-19 advisory group. 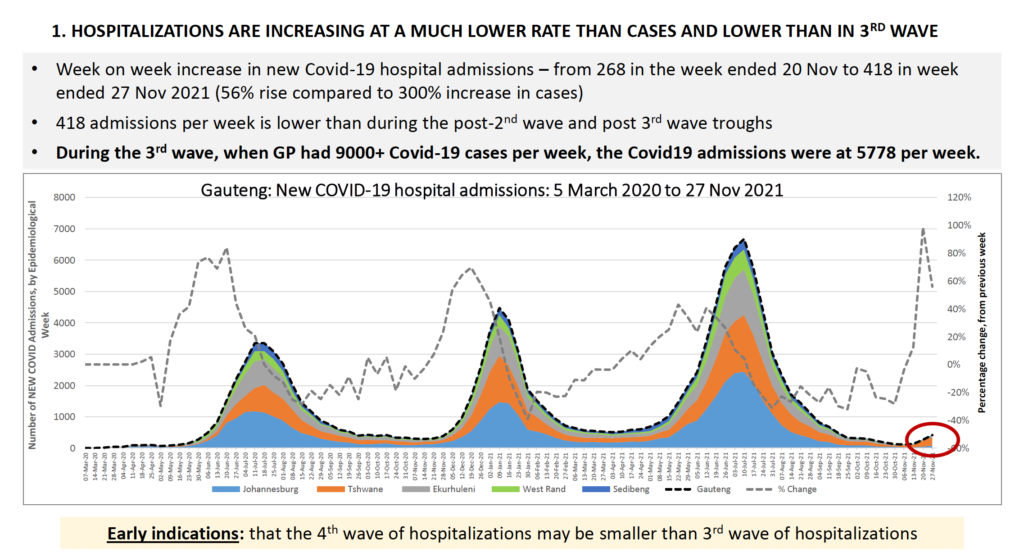 Gauteng is currently the epicentre of South Africa’s fourth COVID-19 wave and scientists have shown that the current infections are being driven by Omicron, not Delta as in the previous wave.

During the Delta third wave, vaccinations were not widely available whereas currently 42% of South Africa’s adult population is now vaccinated.

Based on current figures, statisticians predict that Gauteng will record less than half the hospitalizations of the previous wave when this (fourth) wave peaks, likely in two weeks’ time –  an estimated 4000 hospitalisations in comparison to 9,500 previously.

Currently, most of those hospitalised are people under the age of 39, a group that has lower vaccination rates than older people. 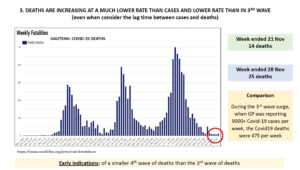 However, the rate of infection appears significantly faster than Delta, with Gauteng cases increasing by over 20% per day. By 22 November, the Reproduction number (R) had increased to 2.33 with 12,5% of tests being positive for the week ending 27 November – a whopping 261% increase compared to the previous week.

Johannesburg – the biggest city in the province – recorded 155 COVID-19 cases in the first week of November but this had shot up to 3,595 cases two weeks later.

Cases are starting to rise rapidly in the rest of the country too, and late Thursday South Africa reported 11,535 new COVID-19 cases, an increase of 368% from last week, and a case positivity rate of 22,4%. 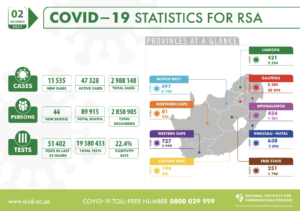 Reinfection does not offer protection

Aside from the rapid transmission rate, scientists are also concerned that previous infection from COVID-19 does not appear to offer protection from Omicron infection.

“Many [South Africans] have had previous COVID infection and we believe that previous infection does not provide them protection from infection due to Omicron,” Professor Anne von Gottberg, told a media briefing on Thursday called by the World Health Organization’s (WHO) Africa region.

Von Gottberg, a microbiologist from South Africa’s National Institute for Communicable Diseases, said that this was in contrast to during the Delta-driven third wave when those previously infected had been protected from reinfection.

In the past few days, Omicron has been identified in Ghana and Nigeria, aside from Botswana and South Africa, according to Dr John Nkengasong, Executive Director of the Africa Centre for Disease Control (CDC). Over 23 countries worldwide have also found the variant, the WHO reported on Wednesday.

But WHO Africa virologist Dr Nicksy Gumede-Moeletsi reports that only half of African States have the capacity to do their own genome sequencing which would enable them to identify the variant.

However, only southern Africa and to a lesser extent, the north of the continent, are experiencing significant case increases.

The Northern region had reported a 25% increase in cases, while there were small upticks in the Eastern (8%), Western (3%) and Central (1%) regions.

Dr Richard Mihigo, WHO Africa’s co-ordinator of immunisation, said that the global body was ready to help member states and was currently helping Botswana to increase its oxygen capacity.

WHO officials reiterated that the travel bans imposed on a number of African countries in the wake of Omicron’s identification were “unfair” and would deter other countries from reporting variants as required by the International Health Regulations. South Africa reports losing $63-million in tourist bookings since the variant was announced.