Drug-resistant bacteria, influenza, Crimean-Congo haemorrhagic fever – all have the potential to be the ‘pathogen X’ that could drive the next pandemic, according to scientists sharing notes at a two-day meeting convened by the World Health Organization (WHO) R&D Blueprint.

Dr Ana Maria Restrepo, WHO head of research and development, said that while predicting the future was impossible, the body wanted to develop a common global priority list for pathogens as there was a “pandemic of lists”.

Research has shown that although the number of viral species was increasing, the number of new viral families that are infecting humans is beginning to plateau, according to Dr Barney Graham, formerly with vaccine research at the US National Institutes of Health.

“That suggests that this is a finite problem that we could prepare for in a more proactive way,” he added, pointing out that if viruses within the 27 viral families were grouped according to entry mechanisms, about 120 had the potential for increased human-to-human transmission.

“It would be possible to develop vaccines for 30 prototype viruses in phase one and generate the reagents and data on all the other 90 viruses, at least through animal testing,” said Graham, now at the Morehouse School of Medicine in Atlanta.

Graham is most worried about influenza driving the next pandemic: “Even though we’ve been dealing with influenza for almost 90 years now, I don’t think we’re really ready for the next pandemic. We have vaccine technologies that require six to seven months to scale up,” said Graham, adding that new vaccine technology needed to be applied to influenza so that billions of doses could be made within three to four months.

“We are also very much or considering bacteria as an important potential cause of the next pandemic,” said Restrepo. “Antimicrobial resistance comes to mind, but there is also the evolution of bacteria.”

Dr Loice Achieng from Nairobi University in Kenya, made a convincing case for a bacterium driving the next pandemic, highlighting that many bacteria have high case fatality rates and efficient human-to-human transmissibility.

“If you compare this to mortality from COVID-19 over the last two and a half years there have been 6.5 million deaths globally. If the estimates of AMR-related deaths are indeed true, then it means over that same period, there have been more than 10 million deaths,” said Achieng. “They’re slow. They’re undocumented, many times unrecognised and continue to kill many people.”

Lessons from COVID and other outbreaks

An effective surveillance network for both animals and humans is critical to preparing for the next pandemic, said Dr Kanta Subbarao, director of the WHO Collaborating Centre for Reference and Research on Influenza, based at the Doherty Institute in Melbourne, Australia.

“Surveillance networks came to play a big part even in the response to COVID-19. And I would argue that at least in influenza, we have much more interaction with our animal health colleagues in the surveillance space,” said Subbarao.

“When outbreaks begin, we really rely on astute clinicians to pick them up and identify a cluster of unusual illnesses that they then track and say what is going on. At that point, you need diagnostic assays to identify what the pathogen is, and that means the ability to isolate the virus.”

Pathogen X is mostly like to emerge at level of primary health care where it will not get detected, as 50% of the world primarily in LMICs lack access to essential diagnostics, and primary care is the weakest in terms of access, according to Professor Madhukar Pai from McGill University in Canada.

“We should assume rich nations will again hoard vaccinations, diagnostics and supplies for the next pandemic. And low and middle-income countries be left with nothing,” he added.

Thus preparing for ‘pathogen X’ should focus on building low and middle-income countries’ manufacturing capacity, including of diagnostics, added Pai.

“India and China produced their own COVID19 tests and did not have to wait for the trickle-down charity from high-income countries,” he said.

“This means that we all have we have mutual interest and should have a coordinated global effort towards addressing this problem because it’s not going to stop.” 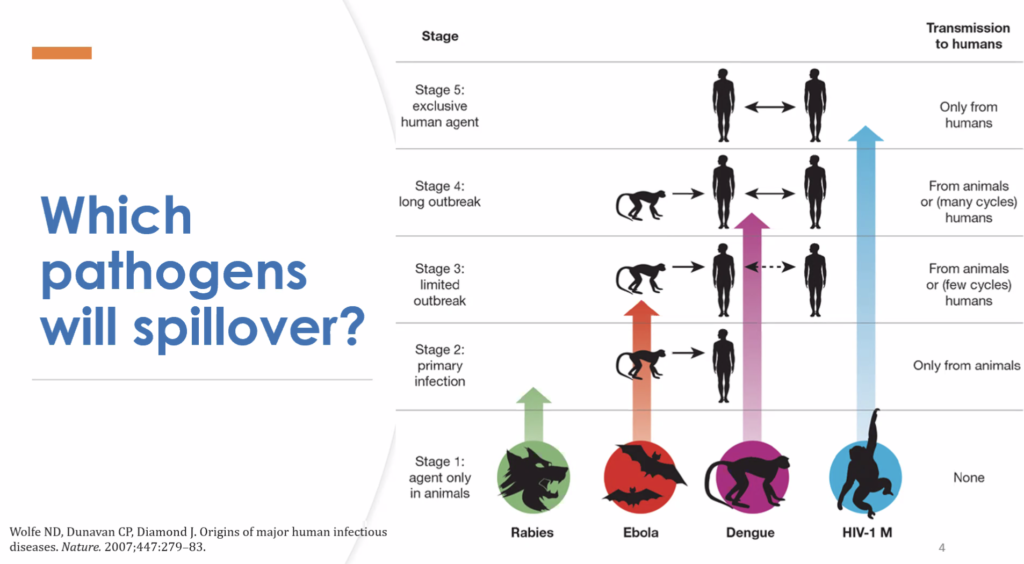 While we have learned a lot about how a new pathogen behaves once it has become capable of infecting humans, there remains a lot of unanswered questions regarding pathogens spillovers from animals to humans, added Chatterjee.

“The focus should remain on [identifying] a zoonotic source for an emerging pathogen X or a reemerging known pathogens, strengthening global governance mechanisms and supporting countries in designing and deploying One Health informed surveillance systems embedded within existing public health systems,” he added.

The EcoHealth Alliance’s Dr Willian Karesh said that global investment in pandemics had focused on health security but there was little money going to prevention and recovery.

Groups including the World Bank are starting to think about the drivers of emerging infectious diseases and pandemics, and there a tight correlation with land use change, deforestation, agricultural expansion and the wildlife trade, said Karesh.

COVID-19 has highlighted the potential risks emanating from the wildlife trade,and there were a number of possibilities to address these, he added. 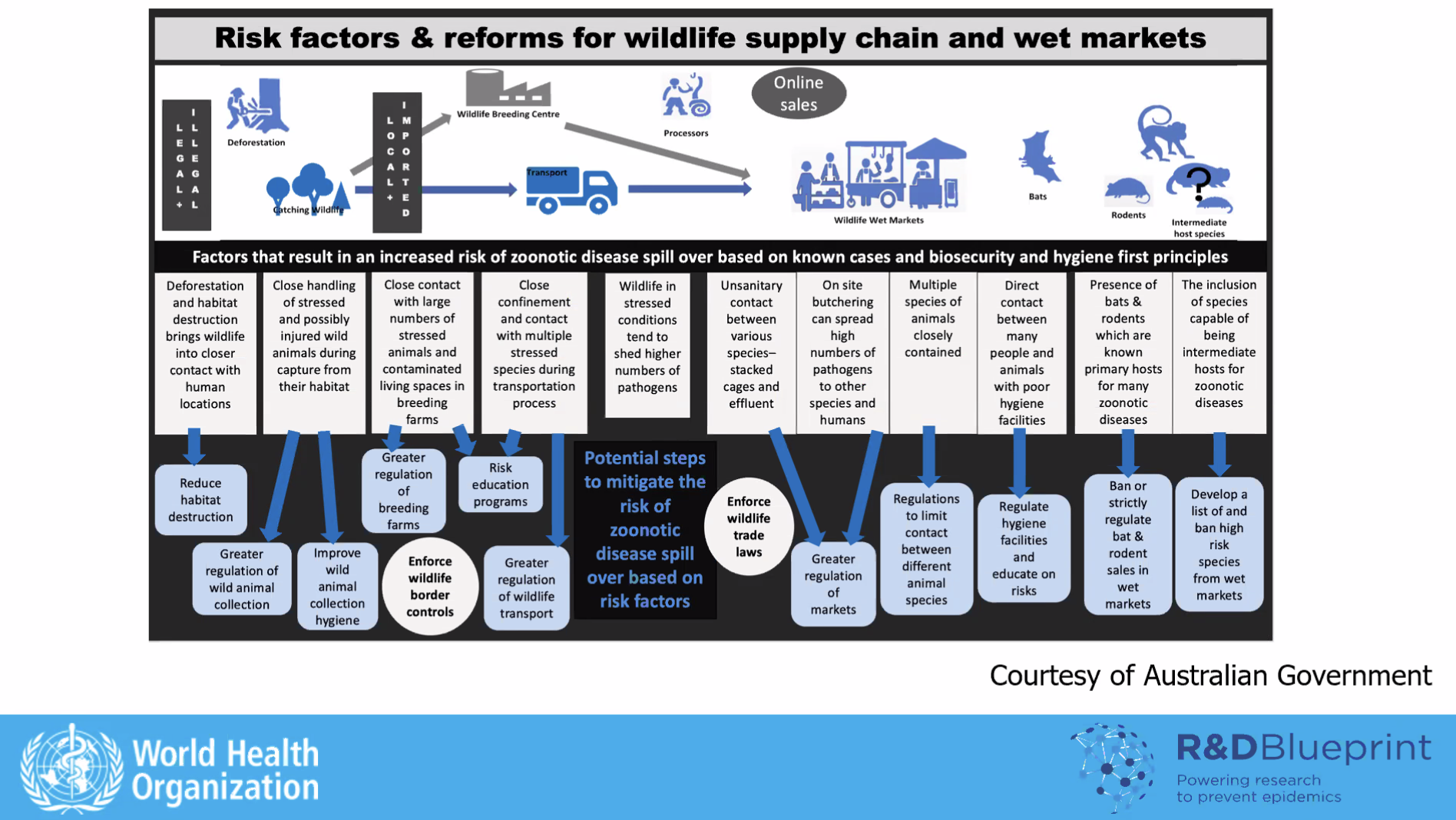 While there are potentially millions of viruses in wildlife, there has been almost no research to implement and test interventions to address this risk, said Karesh, highlighting this as a “priority research area”.

​​Karesh also highlighted the danger of “spill back” of pathogens from humans to animals, where they had the potential to mutate and reinfect humans at a later stage.

SARS CoV2 spilt into mink and white-tailed deer, and there is “a large swath of the US where Delta variants are circulating in deer,” he said.