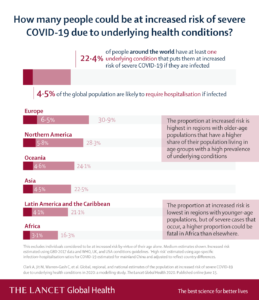 About 1.7 billion people, or 22% of the world’s population, has at least one underlying health condition that puts them at increased risk of becoming seriously ill with COVID-19, according to a new modelling study published in Lancet Global Health.

Based on the new assessment, about 4% of the world’s population, in total, is at high risk of developing severe COVID-19 requiring hospitalization.  But the actual risk of serious forms of the disease varies considerably by age – from less than 1% of people under the age of 20 to about 20% of those 70 years and older.

The new estimates reinforce findings from previous studies indicating that older people and those with chronic diseases are at higher risk.

However, it is the first of its kind to provide national as well as regional and global estimates of people at risk of severe COVID-19 for 188 countries worldwide – based on age, sex and reporting of underlying health conditions.

“It is time to evolve from a one-size-fits all approach to one that centres on those most at risk…It is time to acknowledge that we are not all at equal risk of severe outcomes from COVID-19 and to work together with those most affected to tailor an effective response,” said lead author Nina Schwalbe, of Columbia University’s Mailman School of Public Health in a statement. 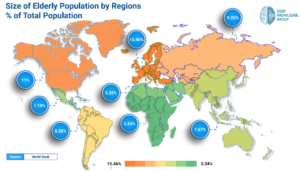 About two thirds of people above the age of 70 are at risk of severe COVID-19, in comparison to only 1% of people younger than 20, largely because older people were about thirteen times more likely to have one underlying condition, in comparison to twenty year olds, the study notes.

As a result, regions with older populations, like Europe and Northern America, are at highest risk of having large number of severe COVID-19 cases, in comparison to regions such as Latin America, the Caribbean or Africa, whose populations are younger on average.

In Europe, for instance, an average of 6.5% of people are at high-risk of developing severe COVID-19, as opposed to 3.1% of people in Africa – mainly because Europe also has double the number of people with a pre-existing health condition.

To quantify the risk of severe COVID-19 in countries, researchers assessed hospitalisation rates for COVID-19 with reference to UN population estimates; disease prevalence data from the Global Burden of Disease 2017, Injuries and Risk Factors Study; and the list of underlying health conditions relevant to COVID-19.

Those, according to the WHO and public health agencies in the United States and the United Kingdom, include: cardiovascular disease, chronic kidney disease, diabetes and chronic respiratory diseases.

Although regions such as Africa, are generally less vulnerable to severe COVID-19 due to their population demographics, that evidence needs to be ‘carefully communicated’ to avoid complacency, warned researchers:

As a result, an unmitigated pandemic in Africa could put 23 million people at risk of severe COVID-19, the authors concluded.

However, the researchers also warn that if routine health services in African health systems continue to be seriously disrupted, more deaths could also result from tuberculosis, malaria or other, even more deadly viruses such as Ebola, which has resurged in recent weeks in the Democratic Republic of the Congo.

Additionally, African countries with a high HIV/AIDS prevalence, such as Eswatini and Lesotho, will have more people at higher risk of severe COVID-19. Similarly, small island nations with high diabetes prevalence, like Fiji and Mauritius, may also see more severe cases.

As lockdowns continue to be relaxed or lifted around the globe, the study’s projections will help policymakers understand how many vulnerable people need to be shielded from the coronavirus, allowing countries to minimize COVID-19 deaths, while also taking the edge off overwhelmed health systems:

“Shielding has the potential to reduce mortality in susceptible groups (direct benefits), while at the same time mitigating the expected surge in demand for hospital beds (indirect benefits).”

Vulnerable populations, like older people, can be shielded by physical distancing and by receiving priority access to a COVID-19 vaccine or treatment.

But the study is only a ‘starting point’, caution its authors, because estimates don’t take into account other strong drivers of COVID-19 infection and death, such as ethnicity, socioeconomic deprivation, and obesity:

“Although older age and underlying conditions increase [the risk of severe COVID-19], people subject to structural inequities are more likely to develop underlying conditions and receive poor quality health care…[and] emerging evidence shows that those with unmanaged chronic conditions, including HIV, are more vulnerable to severe outcomes [of COVID-19].”