Omicron is now in 77 countries, spreading at a rate not seen by other COVID-19 variants and countries should not assume that it is mild, warned World Health Organization (WHO) Director-General Dr Tedros Adhanom Ghebreyesus on Tuesday.

Even if people get milder symptoms from Omicron, the sheer number of cases could overcome health systems that have already been weakened by previous COVID-19 waves, WHO officials stressed at the global body’s COVID-19 media briefing on Tuesday.

Tedros acknowledged that COVID-19 booster vaccines may have an important role to play against Omicron, especially for those vulnerable to severe disease – but stressed that “WHO is not against boosters, we are against inequity”.

“The emergence of Omicron has prompted some countries to roll out booster programmes for their entire adult populations even while we lack evidence for the effectiveness of boosters against this variant,” said Tedros. “WHO is concerned that such programmes will repeat the vaccine hoarding we saw this year and exacerbate inequity.”

On Tuesday, data released from South Africa’s largest insurance provider showed a 70% protection rate against serious Omicron infection for people vaccinated with two Pfizer doses, as compared to 93% or more in previous waves. Other, smaller studies, however, have shown that while the current 2-dose regimes vaccines are significantly weaker against Omicron, boosters can restore protection. Research from Pfizer also has made the case for boosters.

WHO officials stressed that countries had to use all the means at their disposal – vaccinations, particularly prioritising those most at risk; masks and social distancing – to prepare for Omicron.

Meanwhile, the UK has decided to lift its travel ban on all African countries from Wednesday morning, acknowledging that it was not working.

“Now that there is community transmission of Omicron in the UK and Omicron has spread so widely across the world, the travel red list is now less effective in slowing the incursion of Omicron from abroad,” UK Health Secretary Sajid Javid told the UK parliament on Tuesday.

From 4am on Weds 15 Dec, ALL 11 countries will be removed from England's travel red 🔴 list #Internationaltravel (1/3)

Dr Tedros expressed his appreciation to the UK for lifting its ban, while Dr Matshidiso Moeti, WHO Africa director, made an appeal earlier in the day for all countries to “urgently reconsider the recently introduced travel bans” that were destroying African livelihoods, and  “instead show solidarity with your neighbours and act in the interests of the global good”.

Dr Mike Ryan, WHO Assistant Director of health emergencies, said that the global bodies wanted to see “layered control measures” to reduce the risk of viral transmission during travel.

“When a variant like this emerges, it probably has spread in advance of it being detected, and blanket travel bans give a false sense of security,” said Ryan.

“They destroy economies. They have a negative impact on transparency, and we would advise governments to use a more nuanced, more risk-managed and targeted approach,” said Ryan.

“Countries have a right to defend and protect themselves. They have a right to control their borders. They do it for all kinds of other reasons. But it must be done in a way that maintains to the maximum extent possible movement of people, individual human rights and with due regard for the economic impacts that such measures have on countries,” he added.

By Tuesday morning, Omicron accounted for 10% of global COVID-19 infections and this was growing fast, according to Professor Penny Moore, South African Research Chair of Virus-Host Dynamics.

So far, the UK, Norway, Denmark have the highest number of cases outside of South Africa.

Real-world evidence of impact on vaccines

While all the research so far shows reduced vaccine efficacy against Omicron, quantifying this is hard given the different contexts and different methods.

However, data released on Tuesday by South Africa’s biggest health insurance company, Discovery Health, showed that two doses of the Pfizer vaccine provided around 70% protection against hospital admissions but only around 25% protection against infection.

This was according to an analysis of the vaccine and clinical records, and pathology test results of around 78,000 Discovery members who had been infected by Omicron between 15 November and 7 December, according to the group.

However, the group cautioned that the data was taken from the early part of the outbreak.

The WHO’s COVID incident manager, Dr Abdi Mahmud, said that South Africa had shared the data of 400,000 patients and the body was in the process of comparing the profiles of those infected with Delta with those infected by Omicron. 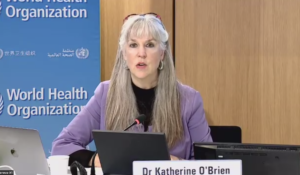 “What’s really important is that these are early reports and there are considerations about exactly who was vaccinated, and what the disease severity is,” said Dr Kate O’Brien, WHO Director of Immunisation and Vaccines.

“So [this data] is certainly of significant interest and we will continue working with partners on additional reports that we know are coming because what is really important is an aggregate of evidence from around the world,” said O’Brien.

“I think the important thing though, is that transmission of Omicron is not going to be solved by vaccines. Protecting against that severe end of the disease spectrum. is really critical. But we have to be doing all of the interventions in order to assure that we have the lowest transmission possible as Omicron is moving its way through different populations,” she stressed.

Ryan added that the WHO was in contact with hundreds of researchers around the world but that it was too early to answer a number of questions related to Omicron, including whether it was milder than Delta and whether vaccines could prevent severe infection.

Related
Oxford Study: COVID-19 Significant Cause of Death in US Children And Youth
Infectious Diseases
It’s Still a Pandemic: WHO Advisers and Chief Concur
Pandemics & Emergencies
Africans Struggled to Get COVID-19 Tests – What Must Change Before the Next Pandemic?
Drug & Diagnostics Development

Related
Oxford Study: COVID-19 Significant Cause of Death in US Children And Youth
Infectious Diseases
It’s Still a Pandemic: WHO Advisers and Chief Concur
Pandemics & Emergencies
Africans Struggled to Get COVID-19 Tests – What Must Change Before the Next Pandemic?
Drug & Diagnostics Development