The World Health Organization (WHO) doesn’t fully know what is driving the latest monkeypox outbreaks; it doesn’t know the virus’ animal reservoir nor knows what the future holds for the disease. 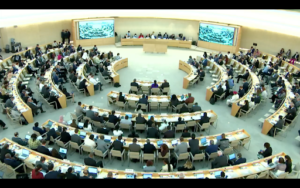 A session at the 75th World Health Assembly that was aimed at enlightening member countries ended up highlighting the existence of knowledge gaps and uncertainties regarding the future of monkeypox virus disease that has now been reported in about 20 countries just 17 days after the UK reported its first case.

On 7 May 2022, the UK Health Security Agency (UKHSA) announced an individual was diagnosed with monkeypox in England. According to the agency, The patient had a recent travel history from Nigeria where they believed the patient contracted the infection before traveling to the UK. Seventeen days after the announcement, monkeypox was discussed at the World Health Assembly on a day that the UK reported its 71st case. Cases have also been reported in a number of countries in Europe and beyond.

According to the UKHSA, a notable proportion of the cases identified to date have been among people who are gay, bisexual and men who have sex with men. And despite further cases being detected, it said the risk to the UK population remains low.

“We are continuing to promptly identify further monkeypox cases in England through our extensive surveillance and contact tracing networks, our vigilant NHS services and thanks to people coming forward with symptoms,” said Dr Susan Hopkins, UKHSA’s Chief Medical Adviser. 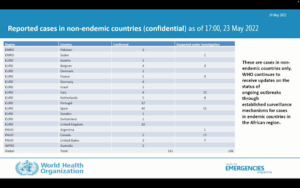 At a WHA75 Committee session on Tuesday, WHO executive director of Health Emergencies Programme, Dr Mike Ryan, described monkeypox as “an emerging zoonosis that has once again reached a species barrier, and is now transmitting in multiple countries but is a containable event nonetheless”.

Dr Sylvie Briand, WHO director for Global Infectious Hazard Preparedness, said the global health body has been monitoring the outbreak of the disease for several years, especially in a number of African countries in which it is endemic.

She added the WHO had always been concerned that monkeypox would replace variola virus (the virus that causes smallpox) which was eradicated in 1980 — three years after the last wild case was reported in 1977, among human populations.

For several years, she said monkeypox was exported by travellers, but the cases had remained extremely isolated and have not become major outbreaks in countries which imported the virus.

‘Current situation is not normal’

In sharp contrast to previous epidemiological trends for monkeypox, WHO described the current outlook of the disease as not normal with 131 confirmed and 106 suspected cases now reported in 19 countries between 7-23 May.

“We’re currently facing a very unusual situation. We haven’t seen this type of situation in previous years. In a few days, we’ve had a high number of cases in many countries and that raises a number of questions and it’s unusual,” she said.

The initial suspicion was a mutation in the virus genome, but WHO said while more data is still needed, initial genomic studies suggested the virus hasn’t changed or mutated. What is considered more likely is a change in the pattern of human behaviour and this could explain the numerous transmissions in different areas of the world.

She noted that after two and a half years of the Coronavirus pandemic where there were a number of restrictions on human contact and large events, the global health body is suspecting that individuals are now more interested in getting out to events. In the same vein, they may be taking advantage of the fact that COVID-19 restrictions have now been lifted.

“That means that they’re having, for example, more human contact or there are larger assemblies of people together, which means that there has been a facilitated transmission of this disease,” she added. 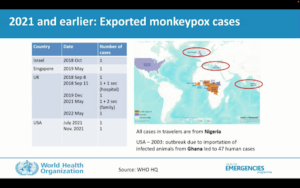 WHO however admitted that the outbreaks are still plagued with several unknowns and uncertainties about the future. These include the extent of the current disease spread in non-endemic countries.

“Are we just seeing the very tip of the iceberg or have we already passed the spike in transmission communities?” Briand asked. She added that the animal reservoir of the monkeypox virus is still unknown.

According to her, more research is needed on the modes of transmission to better understand what has generated the current unusual situation. She however encouraged countries to increase the surveillance of monkeypox in order to know the levels of virus transmission and to understand the outbreak progression in countries.

She added that while there are available medical countermeasures, they are extremely limited in quantity and some of them are not yet fully licensed to be put on the market.

Going forward, the WHO recommends targeting containment of the disease in countries where monkeypox is non-endemic.

“We believe that it is still containable. It is possible to cut the transmission chain by first of all increasing awareness, and early recognition in our populations. Also, detecting cases, enhancing clinical recognition of the disease to ensure early detection of cases and isolation of patients to make sure that these patients do not transmit to their countries or their loved ones,” Briand added.

Intensified surveillance through cluster investigation and contact tracing are also being recommended by the WHO to stop chain transmission while contacting sexual partners would ensure that there is no sexual transmission of the disease.

Ryan added that the monkeypox outbreak is the latest in the cycle of disease emergence, amplification and dissemination that the entire world needs to face together.

“We are clearly making progress in our capacities to work together in the face of these emerging threats,” Ryan concluded.