The World Health Organization (WHO) has not listed the SARS-CoV2 C.1.2 variant discovered in South Africa as either a variant of interest or of concern, and it does not appear to be increasing in circulation.

This follows an alert about the variant that was issued on Monday by the South African National Institute for Communicable Disease (NICD), and a recent pre-print article that reported “the identification of a potential variant of interest assigned to the PANGO lineage C.1.2”.

Maria Van Kerkhove, WHO’s lead on COVID-19, tweeted on Monday that the variant “did not seem to be increasing in circulation but we need more sequencing to be conducted and shared globally. Delta appears dominant from available sequences”.

To date there are ~100 sequences of C.1.2 reported globally, the earliest reports from May ‘21 from 🇿🇦.

At this time, C.1.2 does not appear to be ⬆️ in circulation, but we need more sequencing to be conducted & shared globally. Delta appears dominant from available sequences. pic.twitter.com/GaUqRsUFyv

According to the NICD, the variant has been “detected in all provinces in South Africa at relatively low frequency (up to ~2% of genomes)” between May, when it was first detected, and August. By far the majority of COVID-19 cases in the country are due to the Delta variant.

“While the C.1.2 lineage shares a few common mutations with the Beta and Delta variants, the new lineage has a number of additional mutations,” according to the NICD.

“While some of the mutations in the C.1.2 lineage have arisen in other SARS-CoV-2 variants of concern or variants of interest, we are being cautious about the implications, while we gather more data to understand virus of this lineage.”

The preprint article notes that C.1.2 has “concerning constellations of mutations”. These include “multiple substitutions (R190S, D215G, E484K, N501Y, H655Y and T859N) and deletions (Y144del, L242-A243del) within the spike protein, which have been observed in other VOCs and are associated with increased transmissibility and reduced neutralization sensitivity”.

However, the article notes: “Of greater concern is the accumulation of additional mutations (C136F, Y449H and N679K) which are also likely to impact neutralization sensitivity or furin cleavage and therefore replicative fitness.” 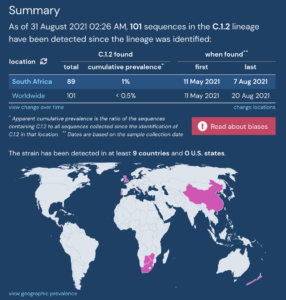 Professor Tulio de Oliveria of the KwaZulu-Natal Research Innovation and Sequencing Platform (KRISP), one of the authors, said that the scientists had decided to publish the pre-print as they observed “the C.1.2 persistence in South Africa and is now in another 10 countries”.

Acknowledging that “it is early days as only 95 genomes have been published”,  we have found that “in this pandemic is share info quicker than later”, said De Oliveria.

De Oliveria said that C.1.2 has 14 mutations in the spike protein “including three mutations at the receptor-binding motif, the Y449H, E484K, and N501Y” and that two of the mutations have been found in variants of concern Alpha, Beta, and Gamma.

It has since been found in Africa, Europe, Asia and Oceania.

“Based on our understanding of the mutations in this lineage, partial immune escape may be possible, but despite this, vaccines will still offer high levels of protection against hospitalization and death,” according to the NICD.

“We expect new variants to continue to emerge wherever the virus is spreading. Vaccination remains critical to protect those in our communities at high risk of hospitalization and death, to reduce strain on the health system, and to help slow transmission.”

The WHO defines a “variant of concern” as one that enables “an increase in transmissibility or detrimental change in COVID-19 epidemiology, or an increase in virulence or change in clinical disease presentation; or a decrease in effectiveness of public health and social measures or available diagnostics, vaccines, therapeutics”.

Meanwhile, a WHO “variant of interest” is characterised by “genetic changes that are predicted or known to affect virus characteristics such as transmissibility, disease severity, immune escape, diagnostic or therapeutic escape; and identified to cause significant community transmission or multiple COVID-19 clusters, in multiple countries with increasing relative prevalence, alongside increasing number of cases over time, or other apparent epidemiological impacts to suggest an emerging risk to global public health”.