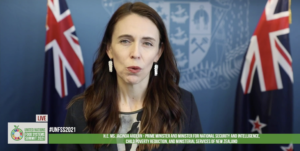 “We encourage constructive global cooperation to progress this aim, including during this year’s World Trade Organization (WTO) Ministerial Conference,” she added. The WTO has been negotiating over fisheries subsidies since 2001, battling to get consensus on subsidies that contribute to overcapacity and overfishing.

Adern added that New Zealand would also be joining the indigenous peoples’ food systems coalition, announced earlier by Myrna Cunningham, President of the Fund for the Development of the Indigenous Peoples of Latin America and the Caribbean.

“This means providing the significant role of Maori in our food sectors, and encouraging the growth of Maori agribusiness by removing barriers and empowering Maori leadership,” said Adern.

The summit, which involved 18 months of consultations of over 100,000 people in 148 countries, strongly emphasized the importance of ‘traditional’ food to combat hunger and climate change. Two coalitions – on school meals and healthy diets from sustainable food systems – were also announced on Thursday.

“We need food systems that support the health and well-being of all people,” said UN Secretary-General Antonio Guterres. “ Malnutrition, hunger and famine are not forces of nature. They are the result of the actions or inactions of all of us.”

“Every day, hundreds of millions of people go to bed hungry. Children are starving. Three billion people cannot afford a healthy diet, two billion are overweight or obese, 462 million are underweight and nearly one-third of all food that is produced is lost or wasted,” said Guterres.

“We are waging a war against nature and reaping the bitter harvest: ruined crops, dwindling incomes and failing food systems. Food systems also generate one-third of all greenhouse gas emissions, and they are responsible for up to 80% of biodiversity loss,” he added.

Professor Joachim von Braun, head of the summit’s scientific group, said that four actions had been distilled from the consultations.

The first involves achieving nourishment for all people: “Science says we actually can come close to ending hunger by 2030. Our modelling shows that it may cost an additional $40 to $50 billion per year until 2030 only,” said Von Braun.

“Increased and sustainable production technologies, better markets, reduction of food waste and losses, and social protection, including school feeding and nutrition programmes are the central components of that investment,” he added.

“Secondly, we must boost nature-based solutions and production. The global food system emits about 30% of global greenhouse gases, but it can and must become climate neutral,” he added.

“The fourth area is to build resilience to vulnerabilities. The food climate and COVID crisis must be addressed jointly because they are closely linked. A One Health approach for resilience is called for,” he added.

Elaborating on the $10 billion US commitment to food security announced by President Joe Biden in his address to the UN General Assembly on Wednesday, Head of USAID Samantha Power said half of this would be spent in the US.

“The other half will be spent fighting global food insecurity, helping smallholder farmers and their families escape poverty,” said Power, adding that the money would be channeled through Feed the Future, America’s global hunger and food security initiative.

“We’re going to revise our global food security strategy to make sure that money does more good in the world, that we focus more on inclusive agricultural growth, the lives of women, girls and marginalised communities,” said Power.

“That we invest tens of millions of dollars in fortifying foods with critical vitamins and minerals to fight malnutrition, and that we double down on climate-smart investments like drought-tolerant seeds and carbon storage in soils, so the world can boost crop yields while cutting emissions.”

“With new investments, and a new strategy, Feed the Future aims to contribute to a 20% reduction in poverty and stunting in target countries over the next five years,” said Power.

Meanwhile, the WHO announced that it will support the coalitions on school meals and healthy diets from sustainable food systems.

“The two coalitions are founded by and comprised of member states and other partners, including UN agencies,” said the WHO.

“Healthy diets and sustainably produced, safe food for all is not an out-of-reach aspiration, but an unavoidable component of global development, a human right and an achievable goal which can be realised through clear, well established and aligned actions,” said Dr Francesco Branca, WHO Director of Nutrition and Food Safety.

The School Meals Coalition wants to ensure that every child has the opportunity to receive a healthy, nutritious meal in school by 2030 by improving the quality of nationally owned school meal programmes and strengthening school meal systems globally.