Thirteen African countries and an international network of research institutions have joined forces to launch a multi-country clinical trial of COVID-19 drug treatments in Africa for people who are mild to moderately ill.

The new ANTICOV trial, led by the Geneva-based Drugs for Neglected Diseases Initiative (DNDi) aims to respond to the urgent need to identify drugs that can be used for early treatment of COVID-19.

Although Africa has so far managed the COVID-19 pandemic exceptionally well, with only an estimated 4% of the world’s cases, a resurgence of infections being seen right now underlines the fact that the continent is not immune. And what was mostly urban outbreak until now is now spreading increasingly in rural areas.

“Treating mild cases is urgently needed to halt progression to severe disease and prevent spikes in hospitalization that could overwhelm already fragile health systems,” said DNDi’s Bernard Pécoul, speaking about the launch of the new initiative. “The ANTICOV trial brings together African and global science and public health leaders from 26 institutions and will enrol up to 3,000 participants across 13 countries.”

The clinical trial will be carried out at 19 sites by the ANTICOV consortium, which includes 26 prominent African and global research and development (R&D) organizations, coordinated by DNDi, an international non-profit R&D group with extensive partnerships in Africa. 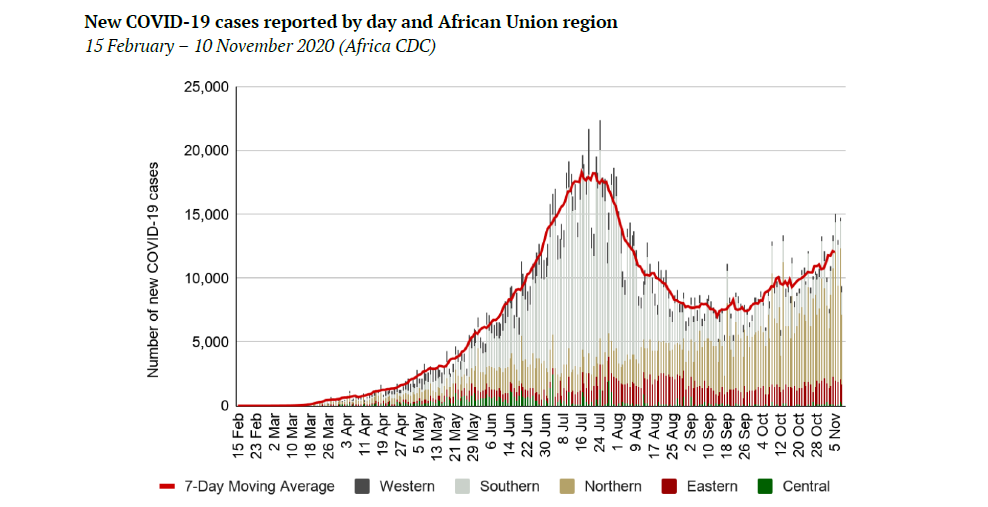 Focus on Repurposed Drugs and Combinations

ANTICOV will initially focus on examining a series of “repurposed” drugs also used for HIV, malaria and other infectious diseases, and where evidence from a large-scale randomized clinical trial could provide missing data on the efficacy of a drug candidate in mild-to-moderate COVID patients.

Health Policy Watch if the trial would also include cutting-edge monoclonal antibody treatments such as those recently approved by the US Food and Drug Administration, but DNDi did not comment. The organization stressed that “the goal is to include additional treatment arms in the ANTICOV trial within weeks.”

As of its launch, the trial will test the HIV antiretroviral combination lopinavir/ritonavir (LPV/r) and the antimalarial drug hydroxychloroquine – both of which have been ruled out for seriously ill patients. In the case of mildly ill patients, the jury is still out.

Various WHO co-sponsored studies, affiliated with the RECOVERY and SOLIDARITY initiatives have concluded that both hydroxychloroquine and LPV/r therapy have no significant efficacy for severe and hospitalized cases. But the ANTICOV trial will explore if either drug might be effective in milder cases, and at different dose regimes. 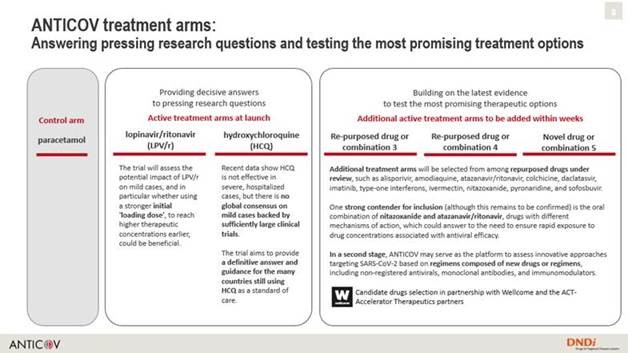 “Today, at least 16 African countries (including 7 of the 13 ANTICOV countries) are recommending the use of chloroquine or hydroxychloroquine, even though scientific evidence is lacking,” DNDi noted in a press statement.

“Several large, randomized trials have shown a lack of efficacy of HCQ as a treatment for COVID-19 in severely ill hospitalized patients, but the drug still needs to be tested in large, randomized controlled trials with mild and moderate cases,” it added, referring to statements by WHO’s Chief Scientist Soumya Swaminathan. In June, she flagged a key gap in knowledge: “Does it have any role at all in prevention or minimizing the severity of the illness in early infection. We need to complete those large trials to have a definitive answer on that.”

As for lopinavir/ritonavir, ANTICOV is exploring a dose regimen that has not been tested in other trials in order to determine if the drug combination, normally used to treat HIV/AIDS, might be effective in the treatment of mild-to-moderate cases of COVID-19, before the inflammatory stage of the disease is reached.

Among the other potential therapeutic options being explored by ANTICOV are medicines currently used to treat malaria, HIV, hepatitis C, parasitic infections, and certain cancers.

An ‘adaptive platform’ design will enable several treatment candidates to be tested simultaneously, also allowing for the testing of new therapeutic candidates as they emerge, DNDi said.

The trial is part of the WHO cosponsored ACT Accelerator’s therapeutics arm, which was launched in April 2020 by WHO to ensure equitable global access to innovative tools for COVID-19 for all. Unitaid – one of the principal funders of ANTICOV – is a co-convenor of the Therapeutics Partnership of the Accelerator, together with the Wellcome Trust. All clinical trial data generated by ANTICOV will be shared on an open platform, DNDi said.

The trial, led and managed by African researchers, also aims to provide African-led solutions to the pandemic as well as overcome community concerns and suspicions that have sometimes emerged around the conduct of clinical trials managed by researchers from abroad.

It also makes up for a dearth of clinical trials on the continent of COVID vaccines and treatments. As Dr Borna Nyaoke, DNDI’s senior project manager in Africa told Health Policy Watch in September, among the 1,000 trials underway worldwide for COVID drugs and vaccines, fewer than 70 are taking place in Africa.

Speaking about the ANTICOV trial launch, Monique Wasunna, Director of DNDi’s Africa Regional Office, said: “African countries have proved that they have the skills and expertise to provide local solutions to this global pandemic.”

The trials are also being supported by the German Federal Ministry of Education and Research (BMBF)/KfW, as well as the European & Developing Countries Clinical Trials Partnership (EDCTP) and Starr International Foundation.