An innovative five-year agreement between the Australian government and pharmaceutical companies, involving a lump sum payment of about US$ 766 million for an unlimited five-year supply of the most advanced Hepatitis C (HCV) drugs, has reduced the per-patient costs of these cutting-edge treatments by roughly 85%, according to a study today in the New England Journal of Medicine.

The analysis is based on publicly available data showing a sharp increase in the number of Australians accessing treatment with the drugs, since the 2015 agreement with four leading manufacturers of direct-acting antivirals (DAAs). The new-generation treatments provide unprecedented cure rates for HCV infections, which left untreated, can cause a range of debilitating conditions over time, including liver disease and liver cancer.

The per-patient cost of the drugs under the new bulk purchase arrangement, described in the study as a “subscription or Netflix model” is estimated to be only about US$ 7,352. This is approximately one-seventh of what would have been the expected price under more standard Australian government drug purchase arrangements and one-tenth of the cost per person of treatment in the United States in 2015 when the agreement was negotiated.

“The price at the time that the agreement was negotiated in the United States would have been around US$ 72,000 per treatment course, and in Australia, we estimate it would have been about US$ 55,000. Whereas under this lump sum payment, the per patient cost would only be about US$ 7,352,” said Suerie Moon, director of research at the Global Health Centre of the Graduate Institute in Geneva, and lead author of the analysis.

“So we estimate that they are paying about 14%, per patient, of what they would have paid if they had gone the standard route. “

The Australian experience is notable because of the high cost of HCV drugs and the national scale of implementation, she added,

“To the best of my knowledge this is the first and largest scale implementation of this kind of approach,” she said, noting that others, however, are now following suit, including two US states, Louisiana and Washington, which recently announced they would pursue similar arrangements to bring down the cost of HCV treatment.

While the full details of the Australian arrangement remain secret, the study was able to estimate savings with reasonable precision, Moon added, insofar as the total cost of the five-year contract was made public, along with detailed monthly records of the numbers of people who have received HCV treatment over the first two years of the new plan.

“Prior to this agreement, the government was not able to offer universal coverage,” noted Moon, “So what you had was rationing; only the patients at the most severe and advanced stages of the illness would get the treatment, unless they could pay out of pocket. When this agreement was negotiated, it represented a sea change; the message went out to physicians, the community, and civil society and physicians, to come forward for treatment, it will cost you very little. We saw an upsurge.”

As of February 2018, the total number of people treated in the first two years was over 47,000 and the numbers of turning out for treatment each month, had more than tripled.

Expectations are that this pace will taper off somewhat, but even so, more than 100,000 people will likely be treated by the end of the five-year bulk purchase contract period, the study estimates.

The study considered only the direct costs of the drug provision. But there are other large long-term savings to the health system from early treatment, in terms of avoided chronic liver diseases often associated with Hepatitis C, as well as decreased transmission by HCV carriers to others. “There is a strong incentive for the government to urge patients to come forward early,” observed Moon. 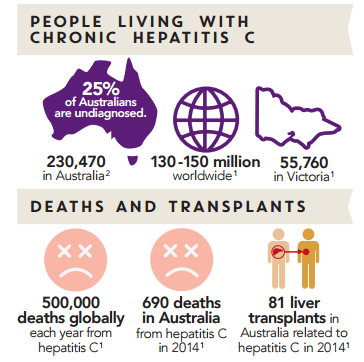 For the patients, meanwhile, financial barriers have been virtually removed since the co-payment required for a 12-week treatment course is less than US$40. Although, an open question remains over the motivation of some populations, such as injecting drug users, to seek treatment.

“One of the key questions now is this: will people continue to come forward, or will this taper off more, once you get to the hard to reach populations, such as injecting drug users who are considered at high risk of Hep C infections?” asked Moon.

Still, under more standard arrangements, the costs of treatment for only about 14,000 patients would have been covered, so after only two years, the government has already more than “broken even” in terms of the costs of the unprecedented deal, with every new patient that comes for treatment, lowering the average cost further.

The big guaranteed payment that the deal offered to the four drug manufacturers, including Gilead, Bristol-Myers Squibb, Merck and AbbVie, could be seen as a kind of innovation reward for new drugs and treatments.

“One of the questions that comes up is, is this good for the companies involved? But at the end of the day, this was a business transaction, the terms were good enough so that the firms were willing to accept it, rather than walk away from the Australian market, which they could have done,” said Moon.

“The seller is guaranteed a certain income over a five-year period, because the cost for them to supply the drug is very low, whether they sell 60,000 or 100,000 treatment courses.

At the same time, the fact that the deal was negotiated with four companies at the same time probably strengthened the government’s hand, insofar as the withdrawal of any one firm would have left its competitors with the entire market.

Of course, since the exact terms of the deal remain confidential, the new analysis still relied upon certain presumptions and estimates, she cautioned. Still the essential data – in terms of the public funds allotted to the long-term purchase arrangement and the scale of the numbers of patients being treated, leave little doubt about the transformative nature of the Australian purchase arrangement.

“The real prices are kept confidential, so this is an estimate,” she said. “But the scale of the difference is so big, the key point is that this is a way to provide a sizeable reward for the innovator, the patent holder, without trading away [peoples’] access to medicines.

“It’s the type of policy idea that gets talked about in theory, and tossed around by different organizations and academics, but rarely get implemented. The fact that this was implemented and at such a large scale, a billion dollars is a lot of money, made it particularly interesting to us.”