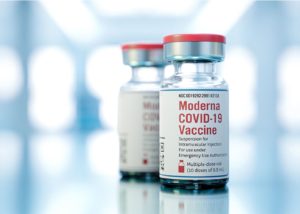 Moderna has fired back against claims made by US National Institutes of Health (NIH)  that its scientists at the National Institute of Allergy and Infectious Diseases (NIAD) helped to invent the crucial component of the pharma company’s COVID-19 vaccine, stating that the mRNA sequence was “selected exclusively” by Moderna scientists.

“We do not agree that NIAD scientists co-invented claims to the mRNA sequence of our COVID-19 vaccine,” a tweet from a thread on intellectual property by the company said on Thursday.

The thread continued: “The mRNA sequence was selected exclusively by Moderna scientists using Moderna’s technology without input of NIAID scientists, who were not even aware of the mRNA sequence until after the patent application had already been filed.”

However, Moderna does recognize the “substantial role that the NIAID has played in helping to develop Moderna’s COVID-19 vaccine,” and has said that it has, in fact, included NIAID scientists as co-inventeres on published patent applications where they have made inventive contributions.

In a story first reported by the New York Times on Tuesday, Moderna had excluded three NIH scientists as co-inventors of a central patent for the company’s COVID-19 vaccine in its application filed in July.

But the NIH has asserted that three of its scientists at the NIAD, Dr John Mascola, Dr Barney Graham, and Dr Kizzmekia Corbett, helped design the genetic sequence used in Moderna’s vaccine, and should be included on the patent application.

Had federal researchers been named as co-inventors in the patent, the government would have almost exclusive right to license the vaccine to other manufacturers, opening access to low- and middle-income countries who are still lagging behind in vaccination rates.

“Recognition as the vaccine’s joint inventor can help the U.S. government finally responsibly steward the vaccine’s use, including by helping secure access for the billions of people still awaiting a safe path out of the pandemic,” said Peter Maybarduk, director of US-based advocacy group Public Citizen’s Access to Medicine, in a statement.

“But Moderna has turned this people’s vaccine into a rich people’s vaccine; refusing to share technology with WHO or developing country manufacturers and sharing very few doses with COVAX while overcharging poor nations.”

Both Moderna and Pfizer have been lambasted by WHO’s Director General Dr Tedros Adhanom Ghebreyesus in the past for offering and planning COVID boosters while billions in LMICs await their first jab.

NIH not backing down from claims

Speaking to Reuters, NIH Director Dr Francis Collins made clear that the NIH, the government’s biomedical research agency, was not backing down.

“I think Moderna has made a serious mistake here in not providing the kind of co-inventorship credit to people who played a major role in the development of the vaccine that they’re now making a fair amount of money off of.”

Advocacy group Public Citizen has pointed out Moderna’s failure to name NIH scientists as joint inventors, imploring NIH to “ensure the contributions of federal scientists are fully recognized,” in a letter to Director Collins last week.

“NIH is showing a modicum of verve at last, suggesting it will not allow federal scientists’ role in the invention of the NIH-Moderna vaccine to be erased,” said Maybarduk.

Moderna has received around $10-billion in US government money to develop its vaccine but has not responded to US government pressure to share the vaccine technology with low and middle-income countries.