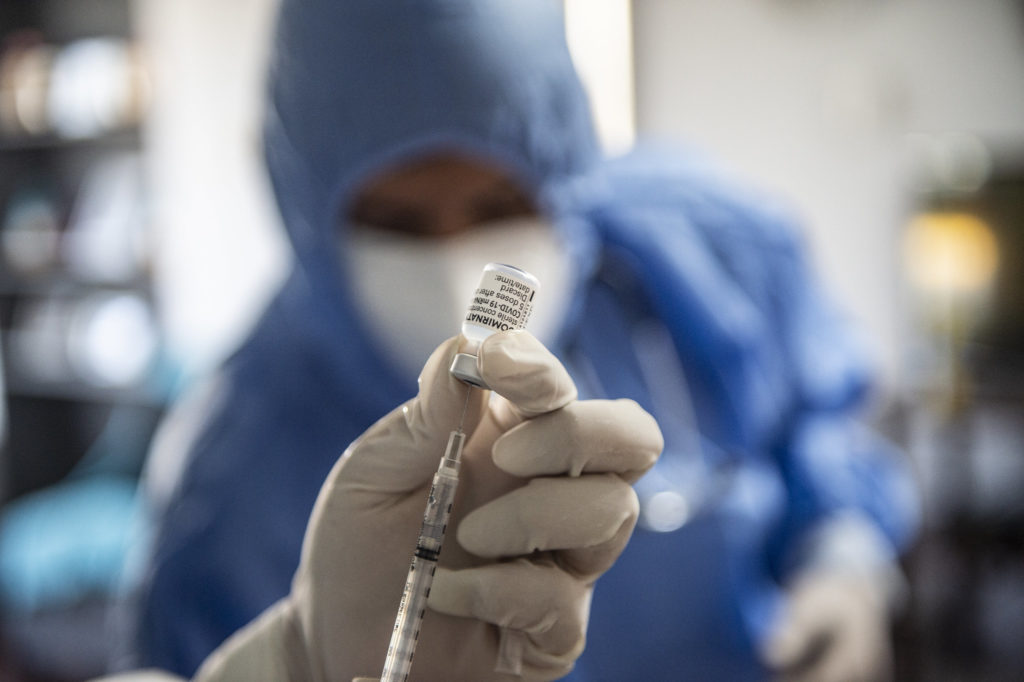 In a milestone event that was also long-awaited, The United States Food & Drug Administration issued a final authorization for the Pfizer-BioNTech COVID19 vaccine – the first such vaccine to receive permanent FDA approval status – following the receipt of an Emergency Use Listing on 11 December.

The definitive FDA approval is expected to bolster both public willingness to voluntarily get the jab – as well as more vaccine mandates.  As one of the first such mandates to be issued in the wake of the announcement, the US Pentagon said that some 1.4 million armed forces personnel around the world would be required to be vaccinated against COVID-19, with guidelines to be issued shortly. Private companies, health care providers and universities across the United States are also grappling with vaccine mandates.

New York City Mayor Bill de Blasio followed, announcing that all New York City school staff would be required to get vaccinated – the largest school system in the United States to have imposed such a mandate. In New Jersey, Governor  Phil Murphy announced that all state employees would have to be vaccinated by 18 October.  That follows moves by California requiring teachers to get vaccinated two weeks ago.  Dozens of private schools and colleges around the country also have instituted vaccine mandates. Some public universities and individual school boards in vaccine hesitant states like Florida are also enacting vaccine and/or mask mandates – despite attempts to bar them from doing so by state authorities.

At the same time, US health officials were clearly hoping that vaccine-hesitant people, who had expressed doubts about the speed of the emergency approvals, might be swayed to get the jab now that the authorization is permanent.

“While millions of people have already safely received COVID-19 vaccines, we recognise that for some, the FDA approval of a vaccine may now instil additional confidence to get vaccinated,” said the FDA’s Acting Commissioner, Janet Woodcock, in announcing the move.  “Today’s milestone puts us one step closer to altering the course of this pandemic in the U.S.”

For now, the final approval, however, remains limited to people age 16 and over, with vaccines for younger groups, aged 12-15, being administered under the pre-existing EUA.  Increasingly, infections are also being seen among younger adults and teens in North America and worldwide as social gatherings regain steam and schools reopen – accelerating the spread of the highly-infectious Delta variant.

Other countries slower on mandates

Other countries are carefully eyeing the US vaccine mandate moves – even if most, including high-income Europe, have been much slower to consider mandates for civil servants and in schools – although  COVID passes for international travelers, large gatherings and high-risk groups such as health workers are being implemented more widely.

In Kenya, however, the government recently mandated that its civil servants be vaccinated by 23 August – a decision that also reflects the slowly expanding vaccine access in some parts of the continent. The move received the support of John Nkengasong, Director of the Africa Centre for Disease Control (CDC), who said “they’re saving themselves, their loved ones and protecting their community and country.”

“We’re going to move forward, making that vaccine mandatory. We’re preparing the guidance to the force right now. And the actual completion date of it, in other words, how fast we want to see it get done, we’re working through that guidance right now,” said Pentagon Press Secretary John Kirby, at a press briefing on Monday.

Meanwhile, Médecins Sans Frontières, issued a renewed call to Pfizer/BioNTech and other COVID vaccine manufacturers to share their vaccine technology more widely, in order to boost global supplies – and particularly in Africa where COVID vaccine coverage continent-wide remains under 2%.

MSF called on the pharma firm to begin cooperating with a new World Health Organisation mRNA vaccine tech hub in South Africa  – which has declared that it will train LMIC professionals in the development and manufacture of mRNA vaccines on an open-access platform.

In a parallel move, Pfizer/BioNTech recently announced a vaccine production deal with the Cape Town-based firm Biovac – but the company has so far deferred from joining the WHO collaboration.

“With only 1.7% of Africa’s population fully vaccinated against COVID-19, increasing and diversifying production and supply of mRNA vaccines through additional manufacturers, beginning with those based in countries on the African continent, offers an opportunity to urgently and sustainably address vaccine inequity during this pandemic, and in the future,” said an MSF statement.

“Médecins Sans Frontières/Doctors Without Borders (MSF) called again on Pfizer and BioNTech to immediately share the vaccine technology and knowledge with manufacturers on the African continent that could help boost global vaccine supply. They should do this via the World Health Organization’s (WHO) mRNA vaccine technology transfer hub hosted in South Africa.”