The Kenyan government has taken the fight against childhood obesity to the classroom through a revised school curriculum that focuses on health and healthy lifestyle behaviours.

The initiative involves including science-based food and nutrition material in the academic content and introducing physical literacy from Grade One.

Addressing a recent Word Obesity Federation (WOF) virtual event on Obesity in Africa: An emerging challenge and a regional perspective, Amonje Moses, Executive Director and Founder of Wellness for Greatness Kenya, said this model was being used by the WOF to encourage governments worldwide to address childhood obesity.

“If you look at our approach of having curriculum support materials in schools, we deliberately made sure that teachers will be able to learn more ideas and have different strategies on how to engage students in physical activities. Physical literacy will make them understand the importance of participating in physical activity,” said Moses.

“We want children all the way from grade one to be taught on healthy eating. With that, we are going to inculcate good dietary behavior in children, so that as they develop to adulthood, they have good nutrition practices,” Veronica Kirogo, Director of the Division of Human Nutrition and Dietetics at Kenya’s Ministry of Health, told the event.

In addition to the adapted curriculum, Kenyans schools also have wellness councils and committees to support teachers, learners and parents to implement the programmes.

According to the World Health Organization (WHO), obesity has nearly tripled since 1975, and health issues associated with being overweight and obesity now kill more people globally than those linked to being underweight.  WHO data also reveal that a staggering 38 million children under the age of 5 were overweight or obese in 2019.

While education is one tool that can raise awareness about obesity, WOF chief executive Johanna Ralston and other health and nutrition experts say that more lasting solutions are needed to achieve long-term gains against obesity.

These include properly defining what type of disease obesity is, clarifying societal confusions and scientific contradictions and taking action that will help raise children that are fully aware of good nutrition and continue to eat well as adults.

Cultural perceptions of obesity in sub-Saharan Africa are also hampering efforts to address it, as many communities see being overweight as a sign of wealth and influence in Africa.

“One of my colleagues from Kenya who works in the heart foundation said if you go to a wedding ceremony and the bride isn’t plump, everybody will say to the man, ‘you need to fatten her up to show that you’re successful’,” Ralston said.

The lack of data on obesity in lower-income countries also poses a major problem in getting a clearer picture of the state of the disease, resulting in many countries using data extrapolated from high-income and developed countries to try and address their unique issues.

Obesity is a Malignant Disease with 200 Complications

One example of how data and science could assist in dealing with obesity is the proper education of Africa’s healthcare workers on how to properly frame obesity – as a disease or not and what type of disease it is.

Dr Carel Le Roux, Co-Director of the Metabolic Medicine Group Diabetes Complications Research Centre at Dublin-based Conway Institute University College, says that obesity can be regarded as a malignant disease, considering that the ill-health and deaths linked to it are not directly caused by the disease but via its contributions to hyperglycemia, nephropathy, neuropathy or macrovascular complications — heart attacks and strokes. 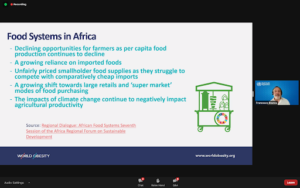 “I think we can frame obesity as a disease, but also it is a malignant disease —  it’s a disease that has more than 200 complications. So you can view it from different sides. If you are, for example, a respiratory physician and you treat sleep apnea, you will view obesity as a risk factor for sleep apnea and I understand that, I think that’s perfectly valid,” Roux said.

“So we are just not clever enough yet to predict which patients with obesity will go on to develop the complications and that’s an important step that is needed,” Roux said.

There are also disagreements about how to refer to people living with obesity without contributing to their stigmatisation. Ralston had earlier told Health Policy Watch that graphic images used on news platforms to accompany stories on obesity often portray individuals living with the condition in a bad light and this belittles the person and shifts focus from regarding obesity as a disease to the result of an individual’s poor lifestyle choices.

Moses echoed Roux’s sentiments and added that such degrading references are not accorded to persons living with other non-communicable diseases including diabetes and cancer.

According to him, the emotional wellbeing and concerns of persons living with obesity within and beyond Africa should always be put into consideration by everyone — including health workers providing services to them.

Preventing Adult Obesity by Focusing on Children and Education

In 2012, the World Health Assembly endorsed a plan on maternal, infant and young child nutrition, which specified a set of six global nutrition targets by 2025.

The plan aims to achieve a 40% reduction in the number of children under-5 who are stunted; a 50% reduction of anaemia in women of reproductive age; a 30% reduction in low birth weight; increase the rate of exclusive breastfeeding in the first 6 months up to at least 50%; reduce and maintain childhood wasting to less than 5%; and ensure that there is no increase in childhood obesity. Progress is being made on all fronts except obesity.

The COVID-19 and Obesity: The 2021 Atlas that was published in March 2021 also revealed that obesity exacerbates the burden of the COVID-19 pandemic —out of the 2.5 million COVID-19 deaths reported by the end of February 2021, 2.2 million were in countries where more than half the population is classified as overweight.

According to Dr Francesco Branca, Director of WHO’s Department of Nutrition for Health and Development, problems stem from food and food systems.

“Food systems, unfortunately, are not functional. They’re making us ill with non-communicable diseases, including obesity, but also they’re affecting our planet through climate change, and reducing biodiversity, and COVID-19 has demonstrated how vulnerable food systems can be,” Branca said.