As COVID-cases rose rapidly in Delhi this November, the strong correlation to increasingly dangerous levels of air pollution in the state has brought more attention to the political pressure to address the health emergency.

Delhi saw its highest number of COVID-19 cases in November, totalling more than 175,000. The city administration also recorded more than 2,000 deaths, the highest so far in the city. The death rate  – 1.6% – was also higher than the national average of 1.45%.

In the same period, Delhi also had 9 days with air quality that was categorised “severe”, with an air quality index (AQI) between 400-500. This corresponds to hazardous levels of small and fine particulate matter: PM 10 and PM 2.5. While PM 10 are particulate matters that can be inhaled, PM 2.5 particles are the ones that carry the highest health risks.

The tiniest particles penetrate deep into the lungs, causing or exacerbating chronic lung disease as well as acute respiratory illnesses like pneumonia. Entering the bloodstream, they are also a factor in increasing risks of hypertension, strokes, and heart attack.

In the wake of the COVID pandemic a growing number of  Indian politicians, including Delhi chief minister Arvind Kejriwal, and government-based scientists have stated that mounting air pollution levels in Delhi and surrounding states this winter has been one of the drivers behind the recent increases seen in COVID-positive cases and mortality.

The air pollution crisis has become an annual occurrence of the early winter across northern India – caused by human factors and exacerbated by winds, drier weather, and temperature inversions.

The seasonal burning of rice stubble by farmers in neighbouring states to clear fields for the winter sowing of crops has become one key factor. Others include road and construction dust, traffic and power plant emissions and the lighting of fireworks during the Hindu festival of Diwali, which was celebrated this year in mid-November.

Kejriwal told Hindustan Times last month: “While I do not discount other factors that may have contributed to [an] increase in COVID-19 cases, experts say that pollution has hugely contributed to the rise of COVID-19 cases in the city, the intensity of the wave of cases, and increasing the number of deaths.”

He added that “we can’t play politics with this problem”, referring to what he alleges is apathy toward pollution on behalf of political parties, and lack of initiative to work towards cleaner air.

“It is well-known that pollution is one of the most important aspects of death,” said Bhargava at a virtual briefing in October. “First being malnutrition, then tobacco, high blood pressure, and pollution.

“On pollution related to COVID-19 mortality, there have been some studies in Europe and the United States. They have looked at polluted areas, and have compared the mortality during lockdown and correlation with pollution, and have found clearly that pollution is contributing to the morality in COVID-19. That is well established by these studies.”

Bhragava’s only strategy for mitigating the problem, however, was to advocate more wearing of masks, as the “most inexpensive treatment”.

A growing number of recent studies have reinforced the links between air pollution and COVID-related mortality.

A recent China-based study published in BMJ Public Health, which concluded that along with travel patterns, airborne particulate matter may be associated with an increased risk of COVID-19 transmission.

The researchers used epidemiological data from previous US and Chinese studies of air pollution and the 2003 SARS outbreak, supported by additional data from Italy.

An earlier study by researchers from Harvard TH Chan School of Public Health, Boston, concluded that higher historical PM 2.5 exposure is positively associated with higher COVID-19 mortality rates in the US.

In a recent World Health Organization (WHO) presentation, Dr Maria Neira, WHO’s Director of Public Health and Environment concluded: “We know that in case of patients with COVID-19, those who will be more at risk of developing severe illness are those with underlying conditions like high blood pressure or heart diseases.

“We see that air pollution might exacerbate those diseases making the population more vulnerable to the disease plus to the severity of developing a more serious illness.”

In India, 1 in 8 deaths were attributable to air pollution in 2017, making it a leading risk factor for death in India, a study published in The Lancet reported.

More than 75% of the population in India is chronically exposed to average ambient PM2.5 levels above 40 μg/m3, the recommended limit by National Ambient Air Quality Standards. The highest PM2.5 exposure levels are in Delhi, followed by the other north Indian states of Uttar Pradesh, Bihar and Haryana.

However, lawmakers in the central government, which can help coordinate between different agencies and state governments to reduce pollution, have traditionally denied the extent of the impact of pollution on health.

In 2017, the Indian Health Minister, Dr Harsh Vardhan said that the hazardous pollution level was not a public health emergency and told news channel NDTV “to attribute any death to a cause like pollution may be too much”.

Even more puzzling was the advice of the Minister of Environment, Forest & Climate Change, Prakash Javadekar, who simply tweeted an encouragement for citizens to “start your day with music”, in a week in November 2019 that saw peak levels of air pollution last year.

Later, as Delhi’s air pollution levels rose further to some of the highest levels ever recorded, India’s Environment Minister Prakash Javadekar declared before the Indian parliament: “No Indian study has shown pollution shortens life. Let us not create fear psychosis among people.”

He was contradicted, however, by his own Environment Secretary, CK Mishra, who told Health Policy Watch during an exclusive interview at the Madrid COP25 Climate Conference: “Nobody denies that poor air quality causes morbidity and may also cause mortality. Certainly … it must be causing mortality.”

“It may not be 7.5 [million deaths],” Mishra added. “But the fact remains that there are numbers to be attended to. As far as the ministry is concerned, we are very conscious of the fact that it is leading to loss of human life and we need to correct this situation.”

Signs of Action This Year – But No Results So Far

In October this year, with COVID sweeping across India as well, Delhi’s Kejriwal declared a “war on pollution”, forming a team to monitor the sources of pollution including open air burning complaints, and repairing the city’s potholed roads to control dust.

Kejriwal also began promoting an inexpensive biological formulation that can be sprayed on rice stalks, accelerating their decomposition, eliminating the need to burn them. He has said that the ‘Pusa decomposer’ is already being used by farmers in Delhi State to convert their stubble into fertilizer.

The innovation has not, however, reached the surrounding states of Punjab, Haryana and Uttar Pradesh, from which most of the stubble pollution originates.

“This should be the last year of pollution,” Kejriwal affirmed at a recent leadership summit. “We have petitioned the air quality commission formally to order Punjab, Haryana and Uttar Pradesh governments to ensure this bio-decomposer is used in all the farms there.”

But expert observers are less sure.  They note that the Delhi government so far failed to even curb the use of firecrackers during the week long festival of Diwali.  Despite a ban on their sale, firecrackers were heard across the city during the festival.

Under pressure from the country’s Supreme Court, the Central Government also constituted a permanent Commission for Air Quality Management in the region, which has the power to coordinate action among states. Headed by a former top official in the Petroleum Ministry, the Commission has so far done almost nothing.

Following Diwali and past the peak of the crop burning season, pollution rates in Delhi have subsided somewhat, with an AQI averaging 300-400, but experts are asking how and where more systemic changes could be made to reduce levels year-round as well as avoid future emergencies.

Meanwhile, the city has been blockaded for several weeks by farmers from around the northern Indian region, who are protesting a government plan to remove subsidies. Through a ‘minimum support price’ the government sets to procure produce from the rice and wheat crops that farmers grow, forcing them to sell on the open market.

Farmers have demanded that fines and penalties for stubble burning be withdrawn. In order to appease the protesters, the government might refrain from fining farmers who violate existing laws by burning their crop stubble. While the fines have never been very effective, it’s still a measure that could also create a setback in the air pollution battle.

So far, the dispute over the crop subsidies has failed to get to the root of the air pollution issue, experts also say. This lies in the fact that the current subsidy structure incentivizes farmers to grow excessive amounts of rice, whose rigid stalks are the most difficult to manage – and so are often burnt. The rice cultivation also consumes excessive water in the water-scarce Punjab region.

Environmentalists have said that the crop subsidy structure should support farmers’ cultivation of nutrition rich grains and legumes indigenous to the region, like millet or lentils, which are also less polluting, in how the stubble can be managed. 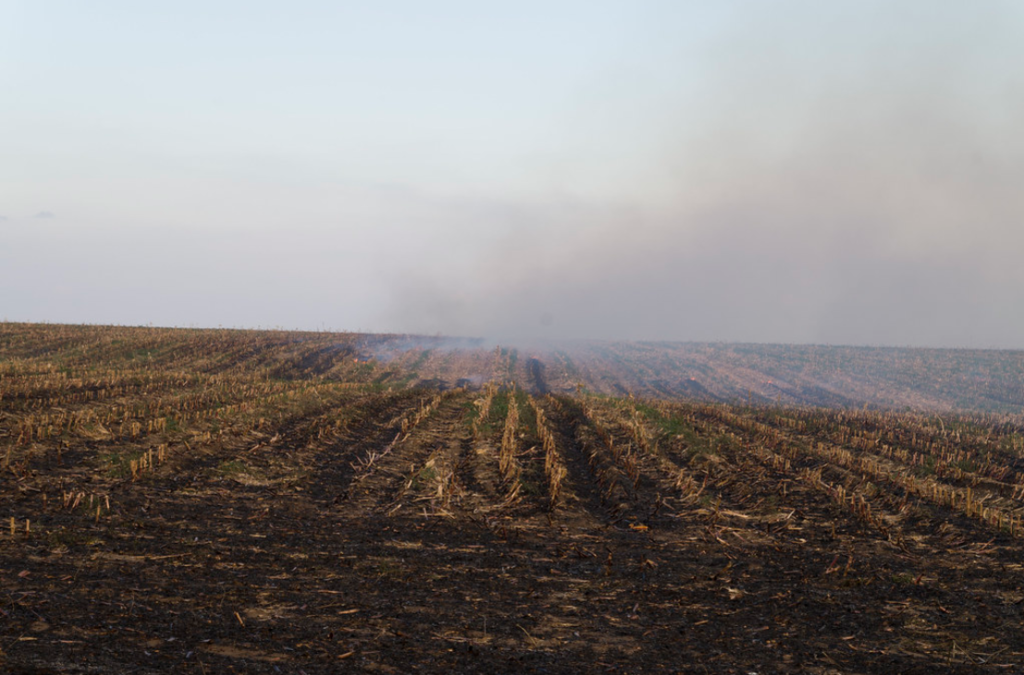 But neither nutrition content or air pollution seem to be key factors right now in the debate over farm subsidies that is occurring right now. It is unlikely that, if subsidies were removed along the lines of the government plans, farmers would grow more nutritious crops either: they are not big candidates for large multinational purchases on the private market.

Despite the inertia, there are growing public pressures on the government to act, said Arvind Kumar, a chest surgeon from Delhi who is internationally known for his outspoken criticism of India’s air pollution and its health impacts.

And so the tide of political apathy towards pollution may be turning, said Kumar, who is the founder of the Lung Care Foundation, a non-profit that spreads awareness about pollution and its effects.

“In the heart of hearts, the politicians know that pollution is a problem and that it damages health. The challenge is admitting that to the public,” said Kumar. “But with every passing year, with the problem becoming more acute and more intense, there will be more outcry.”