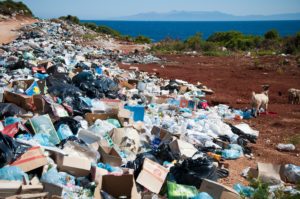 The pivotal new statements call for a “phase out of inefficient fossil fuel subsidies”, a key driver of climate change – as well as the cause of an estimated $8.1 trillion global cost of health damages associated with exposure to air pollution. Individuals from low- and middle-income countries are usually at the receiving end of climate change effects, panelists and speakers at the launch echoed.

The fossil fuels subsidy reform statement was only signed by 44 countries, including the European Union. However, the reference to “phase out of inefficient fossil fuel subsidies” is stronger that the agreement reached at the COP26 to “phase down” fossil fuel use after a last-minute intervention by India.

A second statement calls for launching “informal dialogue” on ways to reduce trade in polluting single use plastics -was launched along with a third statement calling for a more structured WTO dialogue on trade and environmental sustainability.

The growing risks of microplastics pollution to the human food chain, and human health via both fisheries as well as agriculture, has been highlighted recently in a new UN Food and Agriculture Organization study. According to Australian Ambassador and Permanent Representative to WTO Geroge Mina, the global trade in plastics measures US$1 trillion annually. “If we don’t act now, the weight of plastics in our ocean will be greater than the weight of the fish.”

Together, the three statements – co-signed by 81 countries – aim to put environmental sustainability issues on WTO agendas, at least informally, as challenges that need to be tackled by the global trade body. “More than half of the 81 co-sponsors across the three statements are from developing countries,” the Director General of the WTO Ngozi Okonjo-Iweala said at the virtual launch of the statements.

“Treaties are about people but the fact is that people are the most vulnerable and are increasingly paying the price of environmental degradation,” she added. This is the first time in the WTO’s 26-year history that there has been a separate ministerial statement on environment issues beyond fisheries subsidies reform. “There is too much at stake for us to wait decades more for results. The ministerial statements must lead to action,” she added.

“The launch of the three ministerial statements today represents a landmark in the history of the WTO,” said Carolyn Deere Birkbeck, head of the new Geneva-based forum on Trade, Environment and the SDGs (TESS), at the launch event.

“Environment issues have been a challenging topic for members for much of the organization’s first 25 years. This event today is remarkable because it is a set of environmental issues, pressing crises, which is bringing members together.”

The statements were due to be launched at the WTO’s 12th Ministerial Conference, which was to have taken place in Geneva over the week of 29 November – but cancelled due to travel restrictions associated with the new Omicron wave, imposed by the Swiss authorities.

Although they contain no concrete or binding measures, they are an important signal of a new direction that the WTO is taking to bring trade policies better into alignment with global climate and sustainability goals. The launch of the statements are also essential since they also work towards addressing the environmental impacts of WTO’s rules and subsidies.

The statement on fossil fuel subsidies was co-sponsored by 45 WTO members.

This statement aims to rationalise and “phase out of” inefficient fossil fuel subsidies that encourage wasteful consumption. The co-signatories remain optimistic about more member countries joining the initiative as they aim to elaborate concrete options to advance this issue at the WTO in advance of MC13.

Incidentally, the world’s four largest fossil fuel consumers–China, U.S, India and Russia– have not yet signed on to the statement. But current signatories remain optimistic that more members will sign the initiative.

“It is vital that we shift from business as usual as soon as possible” said Damien O’Connor, Minister for Trade and Export Growth, New Zealand at the launch of the statement. He added that fossil fuel subsidies must be reformed if we are to stay on the 1.5C pathway and called the current subsidies “environmentally damaging to the planet.”

“This statement targets one of the biggest barriers to renewable energies. These [current] subsidies encourage greenhouse gas emissions and wasteful consumption and drive down the price of primary plastics adding to the plastic pollution crisis.” Inger Andersen said.

But building consensus on how we can make trade a part of the solution remains a significant challenge, said Rebeca Grynspan, Secretary General, United Nations Conference on Trade and Development (UNCTAD). “A fair, transparent and inclusive dialogue will be essential for success and that hopes to bring to this discussion the developing countries’ perspective on how we can support them toward sustainable trade and development.”

Statement 2: About the Plastics Initiative

UNCTAD had estimated that trade in plastics accounts for nearly 5 % of global trade which is worth more than US$ 1 trillion in 2019. This was almost 40% higher than previously estimated, with more trade in plastics still not accounted for. The statement thus aims toward building more sustainable channels, sharing experiences on approaches toward sustainable plastics trade, and to help the least developed members toward more sustainable technologies and collaborations.

This statement especially builds on the existence of micro plastics in the oceans, our food and in spaces we never imagined it to be in. It highlights the need to reduce plastic usage and waste, and cutting down micro plastics that are now found in fish and even vegetables.

The statement identifies concrete opportunities and areas for cooperation on trade and trade policy that would help reduce plastic pollution while emphasizing the importance for members that the work complements and supports the work in the WTO’s committee on trade and environment.

Statement 3: Environmental sustainability and wrap up

The ministerial statement on trade and environmental sustainability highlights the importance of international trade and trade policy in supporting environmental and climate goals and promote more sustainable production and consumption with the SDGs in mind. This has been co-signed by over 60 signatories including the European Union.

The statement also points towards finding a common ground and aim in furthering the goals of a sustainable trade approach. This would also mean training, knowledge sharing and finding alternative sustainable solutions to current challenges.

“Finding common ground would require investment, transparency and knowledge sharing along with support to have all countries to have more countries improve resilience and ensure a fair transition,” said Mathias Cormann, Secretary-General of the Organization for Economic Co-operation and Development.

Disclaimer: Carolyn Deere Birkbeck is also chairman of the board of Global Policy Reporting, the non-profit association that oversees Health Policy Watch.