A $50-billion plan to end the COVID-19 pandemic developed by the International Monetary Fund (IMF), would generate an additional $9 trillion in global economic returns by 2025, said IMF Managing Director Kristalina Georgieva on Tuesday.

The first element of the IMF’s three-point plan involves vaccinating “at least 40% of the population in all countries by end 2021 and at least 60% by the first half of 2022”, Georgieva told the briefing.

“Second, insuring against downside risks, such as new variants,” said Georgieva. “This would involve investing in additional vaccine production capacity by 1 billion doses, diversifying production and scaling up surveillance, and contingency plans to handle virus mutations or supply shocks.”

“Vaccine policy is economic policy,” Georgieva stressed, referring to the growing divergence between countries with rapid vaccinations that are coming out of the pandemic crisis fast, and those with low vaccination rates, that are falling further behind.

“That is dangerous for everyone because it holds the global recovery back, and we are creating a breeding ground for mutations,” she added.

Counting the $22 billion recently pledged by G20 member to the Access to COVID-19 Tools (ACT) Accelerator that manages COVAX, Georgieva said that an additional $13 billion could come from grant finance and $15 billion from national governments, supported by “concessional financing” from the World Bank and other development banks.

“By the end of June, we will have approved vaccination operations in over 50 countries. These countries can immediately use vaccines from COVAX, from manufacturers and from donor countries themselves as soon as they are made available,” said Malgass.

“We know that there’s the TRIPS waiver debate going on at the WTO and while I cannot take sides, we need to get to a conclusion on this debate, promote technology transfer and know-how to get lasting increases in production capacity,” said Okonjo-Iweala.

WHO Director-General Tedros Adhanom Ghebreyesus said that the leaders’ calls for the $50 billion rapid investment would “fund the equitable distribution of vaccines, and other crucial health tools”, and the “majority of the new funding would be made available quickly through grants, including to fill the ACT Accelerator  funding gap”.

The IMF, WBG, WHO and WTO leaders issued their joint statement as a round of G7 meetings were set to start, beginning with a meeting of finance ministers later this week. 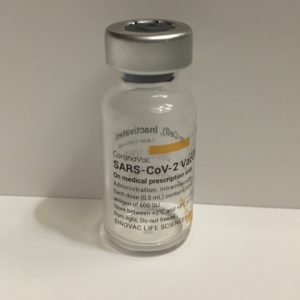 Tedros also welcomed the WHO decision on Tuesday to grant emergency use listing (EUL) to the Chinese COVID-19 vaccine, Sinovac (also called CoronaVac) – the eighth vaccine to get this listing, a prerequisite for it to be used by COVAX.

“Vaccine efficacy results showed that the vaccine prevented symptomatic disease in 51% of those vaccinated and prevented severe COVID-19 and hospitalization in 100% of the studied population,” according to a WHO statement based on the recommendation of its Strategic Advisory Group of Experts on Immunization (SAGE)

“Few older adults (over 60 years) were enrolled in clinical trials, so efficacy could not be estimated in this age group,” said the WHO.

However, it is not recommending an upper age limit for the vaccine “because data collected during subsequent use in multiple countries and supportive immunogenicity data suggest the vaccine is likely to have a protective effect in older persons,” said the global body.