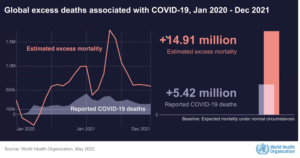 Excess deaths during the first two years of the COVID-19 pandemic are almost triple officially-reported deaths – around 14.9 million deaths rather than the 5.4 million currently reported, according to new figures released by the World Health Organization (WHO).

These much-delayed excess death statistics were finally released on Thursday after being contested by India, which appears to have massively under-estimated its mortality between January 2020 and December 2021.

Excess mortality is the difference between the number of deaths that have occurred and the number that would be expected in the absence of the pandemic based on data from earlier years.

Explaining the “excess deaths” over the past two years, WHO’s Dr Samira Asma said that they included deaths caused directly by COVID-19 and deaths indirectly associated with the pandemic due to unmet health needs.

Meanwhile, 70 countries did not have accurate measures of their population’s mortality, 42 of these in Africa, and figures for these countries were reached purely by modelling.

“This is a staggering toll, and there are staggering data gaps,” said Asma, WHO’s Assistant Director-General for Data and Analytics.

WHO Director-General Dr Tedros Adhanom Ghebreyesus, said that the “sobering data not only point to the impact of the pandemic but also to the need for all countries to invest in more resilient health systems that can sustain essential health services during crises, including stronger health information systems”.

“WHO is committed to working with all countries to strengthen their health information systems to generate better data for better decisions and better outcomes,” added Tedros.

Dr Jeremy Farrar, Director of Wellcome, said that “this devastating death toll was not inevitable”.

“Even now a third of the world’s population remains unvaccinated,” added Farrar. “More must be done to protect people from the ongoing Covid-19 pandemic and shield humanity against future risks.

“Climate change, shifting patterns of animal and human interaction, urbanisation and increasing travel and trade are creating more opportunities for new and dangerous infectious disease risks to emerge, amplify and then spread.”

The WHO and the United Nations Department of Social, Economic and Social Affairs worked together on the data, guided by a technical advisory group of 40 global experts.

“Underlying this process is WHO’s commitment to producing a completely transparent audit trail of all these estimates that we put out,” said WHO senior data advisor Dr Somnath Chatterji.

“This means that we make available all the input data, the method that we have used to generate these estimates as well as the code that has been used. If a country would like to look at this estimate they can, first of all, understand the entire process. Then they can take their own input data if needed, and rerun these models to generate their estimates.”