There is finally “cause for optimism” in the quest for a tuberculosis vaccine, Dr Anthony Fauci, director of the US National Institute of Allergy and Infectious Disease (NIAD), told the opening of the sixth Global Forum on TB Vaccines on Tuesday.

Before the COVID-19 pandemic, TB was the most deadly global infectious disease yet there has been little progress on vaccine development for TB for decades as it is seen as a disease of the poor.

Acknowledging that there were still “basic knowledge gaps” about TB, Fauci said that “there have been significant research advances and there is cause for optimism in the context of our research advances”.

The only licensed TB vaccine, BCG, was discovered 100 years ago and only provides moderate protection against severe forms of TB in babies and young children but does not stop TB transmission in teens and adults.

There are currently 15 TB vaccine candidates, including three in phase 3 trials and two others preparing for Phase 3 trials. 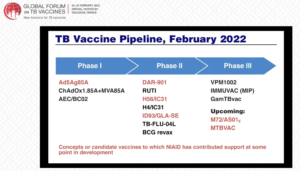 But Fauci cautioned that “incremental changes alone are not sufficient and not acceptable” – particularly in light of how COVID-19 had set back advances in TB.

He also expressed his concern about the rise of “vaccine hesitancy” – even for vaccines as efficacious as those for COVID-19 – and warned that more attention needed to be paid to “effective messaging” about vaccines.

“Public funding for TB vaccine research remains inadequate and industry engagement is low owing to the lack of market incentives, but there are solutions,” WHO Director-General Dr Tedros Adhanom Ghebreyesus told the meeting, which is being hosted by France.

“The pandemic has demonstrated the value of a multi-platform portfolio of vaccine candidates, including mRNA and viral vector technologies. This approach could transform vaccine development efforts for other diseases including TB,” said Tedros.

He identified three essential ingredients to find a TB vaccine: public-private partnerships to bring together expertise and funding; strong political leadership, backed by substantial financial resources and thirdly, “equitable access must be considered early with need prioritised above the ability to pay”.

Mark Feinberg, Co-Chair of the Global Forum, said that the CVID-19 pandemic had shown that “how quickly and creatively we act is what counts”.

“In particular, the speed with which mRNA vaccines can be produced offers real hope that, through application of cutting-edge science, we can harness a more nimble and responsive approach to vaccine design and testing.,” Science is our way out of the tuberculosis epidemic,” stressed Feinberg.

Antimicrobial resistance (AMR) is now killing more people each year than HIV or malaria and is tipped to be the world’s most lethal health challenge by 2050. TB drug resistance accounts for nearly a third of the 3,500 daily deaths from AMR.

Virologist Philippe Sansonetti,  Emeritus Professor at the Institut Pasteur and College de France, said that the development of a TB vaccine was essential to reduce drug-resistance.

“We need vaccines because they protect against antibiotic resistance by reducing the burden of disease,” said Sansonetti. Drug-resistant TB is a significant problem worldwide, caused by incorrect use of TB medication. 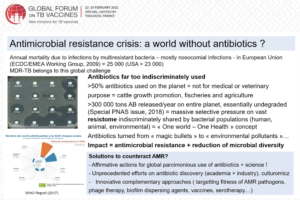 “It’s been calculated that more than 300,000 tonnes of antibiotics are released every year on the planet, essentially un-degraded,” said Sansonetti. This was causing a significant reduction in microbial diversity and accelerating antibiotic resistance.

The European Commission’s Jean-Eric Paquet, Director-General of Research and Innovation, assured the forum that multidrug-resistant TB was a “key focus” of its Innovative Medicines Initiative, a partnership with European pharmaceutical companies.

Carol Nawina, who is living with HIV in Zambia, said she had struggled with TB for years.

“According to current modelling, we will be able to end TB by 2030 if a vaccine becomes available by 2025. And for that to happen, we need to fast-track the trials, particularly Phase 2 trials,” said Nawina, who works for the Community Initiative for Tuberculosis, HIV/AIDS and Malaria plus related diseases (CITAMPlus).

She added that TB vaccines received just $118 million in research funding in 2020, only  9 million more than 2018 levels., and that funding for TB vaccine development is “completely lacking”.