JOHANNESBURG – Violent unrest in South Africa has had a disastrous impact on the country’s healthcare and emergency services and has brought the COVID-19 vaccine roll-out to a near standstill in at least two provinces, as the country continues to battle with a third wave of the pandemic.

On Tuesday, the national health department temporarily halted vaccinations in the Gauteng and KwaZulu-Natal provinces where sites have been affected by the ongoing looting and unrest in the country.  The setback comes as the country is trying to contain COVID-19 infections with a strict curfew, a ban on alcohol sales and restrictions on movement. The majority of daily infections (80 640 on 12 July ) are recorded in Gauteng.

Parts of the two provinces experienced mayhem with several businesses looted, destroyed and set ablaze. Chaos descended following the imprisonment of former president Jacob Zuma on 7 July for contempt of court for refusing to appear before a commission of inquiry into corruption.

The country’s biggest pharmaceutical chains, Dis-Chem and Clicks,  on Monday also announced that they will not be open for regular business or COVID-19 vaccines in KwaZulu-Natal following violence including shops being looted and set ablaze.

Discovery Medical Scheme, the biggest medical-scheme administrator in SA, closed all its vaccination sites except one in Cape Town on Tuesday. The company said it was prioritising the safety of its staff and would reopen when possible.

Due to the unrest in KwaZulu-Natal, Dis-Chem Pharmacies, Dis-Chem Vaccination Sites and Dis-Chem Drive Through Testing Stations in the area will be closed today. We appreciate your patience and apologise for any inconvenience. 💚 KZN family, please stay safe. pic.twitter.com/EXSvvjXa2v

The Department of Health said that the violent unrest had impacted on the vaccine rollout and access to chronic medication for TB, HIV and diabetes patients in parts of KwaZulu-Natal and Gauteng.

“Government and the private sector’s priority is to protect lives and prevent harm to staff, patients and the medical supplies and property that form part of the vaccination programme. Consequently, Government and the private sector are adopting a precautionary principle and will be temporarily closing some vaccination sites which have been damaged or which may be at risk,” said Popo Maja, health department spokesman.

The department advised those in areas affected by the unrest to postpone their vaccination, saying they would soon be releasing a list of those areas.

“The Electronic Vaccine Data System (EVDS) will automatically reschedule appointments for those unable to attend; it is programmed to reschedule up to two missed appointments. If it is not clear whether an area has been affected, the public is advised to contact the vaccination site to which they have been scheduled before proceeding to the site for the administration of vaccines,” said Papa.

Unrest is a Blow to SA’s Vaccine Rollout 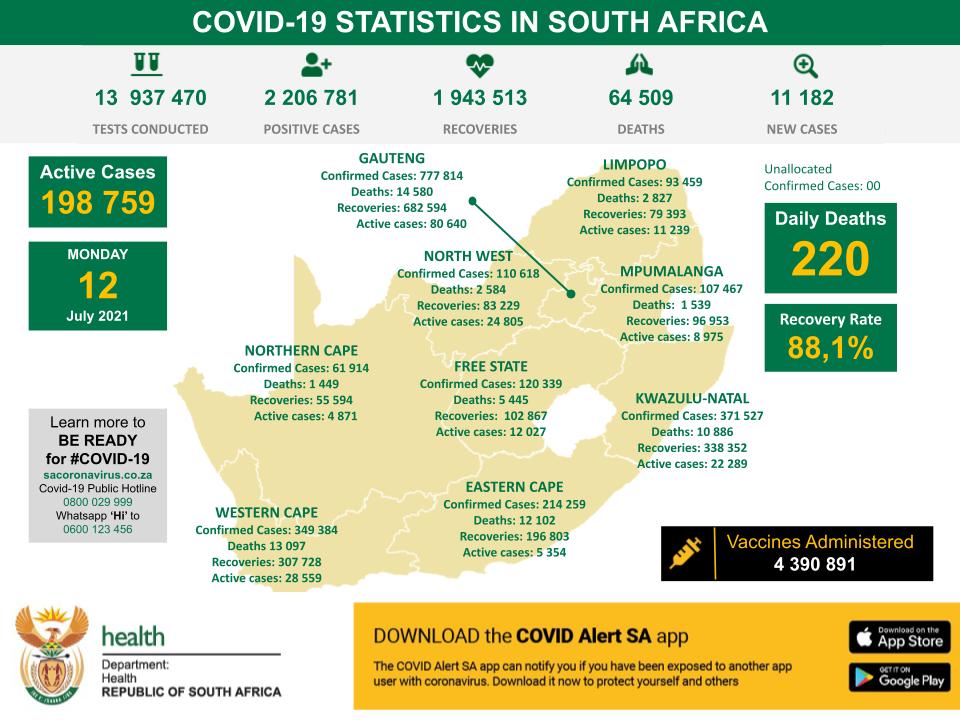 The disruption is the latest blow to the country’s rollout that has been criticised for its late start. Earlier disruptions include a decision not to use the AstraZeneca vaccine amid fears of its efficacy against the Beta variant of the virus, while the delivery of Johnson & Johnson vaccines were delayed after a contamination incident at a US factory.

Prior to the violence that erupted last week, the vaccination numbers had been climbing steadily towards a target of 300,000 a day set by President Cyril Ramaphosa.

“Our vaccination program has been severely disrupted just as it is gaining momentum,” Ramaphosa said in a televised address on Monday. “This will have lasting effects on our ability to consolidate some of the progress we were already witnessing in our economic recovery.”

South Africa has the highest number of confirmed COVID-19 infections (2.2million) in Africa. More than 64,000 people have died of the disease. Of the almost 4.4 million doses of vaccines administered in the country so far, 23% have been in Gauteng and 22% in KwaZulu-Natal.

The Independent Community Pharmacy Association (ICPA) said its pharmacies, some of which were offering Covid-19 vaccinations, were badly affected by unrest over the weekend and on Monday.

“As a direct result of the violence that has spread across the country, our independent pharmacies have been looted and destroyed, with millions of rand of much-needed medication lost and destroyed,” the ICPA said.

The association said it was concerned that the latest developments would severely hamper the plan to reach the country’s daily vaccination targets.

It further warned that the destruction of pharmacies not only affected vaccination plans but patients in dire need of chronic medication and called on the government for better protection of its facilities.

“This becomes impossible since pharmacy vaccination sites have been destroyed and looted,” it said.

While SA’s vaccination programme has been severely impacted by the unrest, Caribbean country Haiti is yet to administer a single vaccine dose.

Haiti has been prioritized to receive vaccines from COVAX because of the deadly wave that has been hitting the country, with sharply escalating cases, hospitalizations, and deaths in recent weeks.

However, it is the only country in the Americas participating in COVAX that hasn’t received any vaccines.