Global greenhouse emissions need to peak before 2025, at the latest, and decline by 43% by 2030 if the goal of limiting global warming to 1.5°C is to be achieved, warned the Intergovernmental Panel on Climate Change’s (IPCC) Sixth Assessment  report on Climate Change Mitigation (AR 6) launched on Monday.

More aggressive investments to replace fossil fuels with renewable energy, along with zero emissions buildings; more compact, walkable cities; and massive reforestation projects are key to achieving the needed changes, the report states.  This along with a stronger emphasis on sector-based emission targets and carbon taxes, the experts stated, etching a way forward for how such changes could actually be accomplished.

But without immediate and deep reductions, limiting global warming will be beyond reach, states the report, authored by some 278 scientists from 65 countries.

Although the IPCC experts were upbeat about dramatic reductions in the cost of solar energy and electric batteries of up to 85% in the past decade, along with a 55% decline in the costs of wind-driven energy, there was not much other good news.

While the rate of increase in climate-warming emissions was 1.3% between 2010 and 2019, in comparison to 2.1% in the previous decade, progress is far two slow, the lead authors of the report said at a press briefing.

Jim Skea, co-chair of Working Group 3 which produced the report, said that without “immediate and deep [global greenhouse] emissions reductions across all sectors”, it would be “impossible” to limit warming to the 1.5°C (2.7F) target that was set forward at the 2015 Paris Climate Agreement.

On the brighter side, the report documents that sufficient options exist to slash emissions by one-half or more by 2030 based on existing, affordable technologies.

“Specific sector-by-sector policies to reduce emissions” might, however, prove more effective as a global mitigation strategy than the voluntary pledges made by countries in the form of nationally-determined commitments (NDCs), said Diana Urge-Vorsatz, vice-chair of the IPCC’s Working Group 3, which produced the report.

Singling out the energy and transport sectors and cities as major emitters, the report underlines that a shift away from fossil fuels needs to be a cornerstone of climate policies.

By 2050, coal consumption needs to fall 95%, oil use by 60% and natural gas consumption by 45% over 2019 consumption levels the report underlines. Those are targets far higher than the commitments countries made at the 2021 Glasgow Climate Conference, where India insisted that the final statement refer to the “phase down” of unabated coal use and related subsidies, rather than the “phase-out”.  Although Prime Minister Narendra Modi grabbed the headlines in Glasgow when he announced that India would achieve net-zero emissions by 2070, NITI Aayog, India’s government think tank has meanwhile projected that coal-based electricity generation would continue to rise until 2040.

Other energy-related IPCC proposals include widespread electrification, improved energy efficiency, and the use of alternative fuels such as hydrogen. 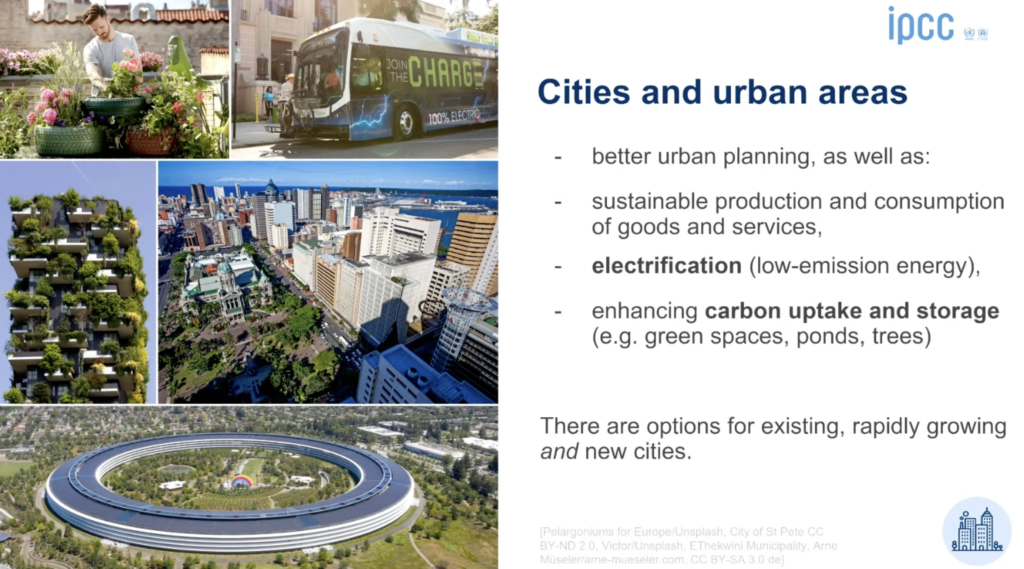 In terms of energy efficiencies, cities, which produce two-thirds of global emissions, could become a nexus for change by promoting more compact, walkable neigborhoods, electrifying public transport and requiring “green buildings” that can resist both extremes of heat and cold through better insulation; ventilation for cooling; and more strategic use of greenery on roofs and walls for both heating and cooling.

In cities, networks of parks and open spaces, wetlands and urban agriculture can reduce flood risks as well as urban “heat-island” effects, the report notes. Heat waves often leave cities several degrees centigrade warmer than the surrounding countryside due to vast expanses of concrete and heat-trapping buildings – and climate change is making this worse.

“We see examples of zero energy or zero-carbon buildings in almost all climates,” said Skea. “Action in this decade is critical to capture the mitigation potential of buildings.”

Industry, which produces around a quarter of global emissions, needs to use materials more efficiently, including “reusing and recycling products and minimising waste”.

The mitigation potential of rural areas, however, is also enormous – due to the fact that forests, peatlands and other biodiverse, open spaces act as natural carbon sinks.

“Agriculture, forestry, and other land use can provide large-scale emissions reductions and also remove and store carbon dioxide at scale,” according to the IPCC. 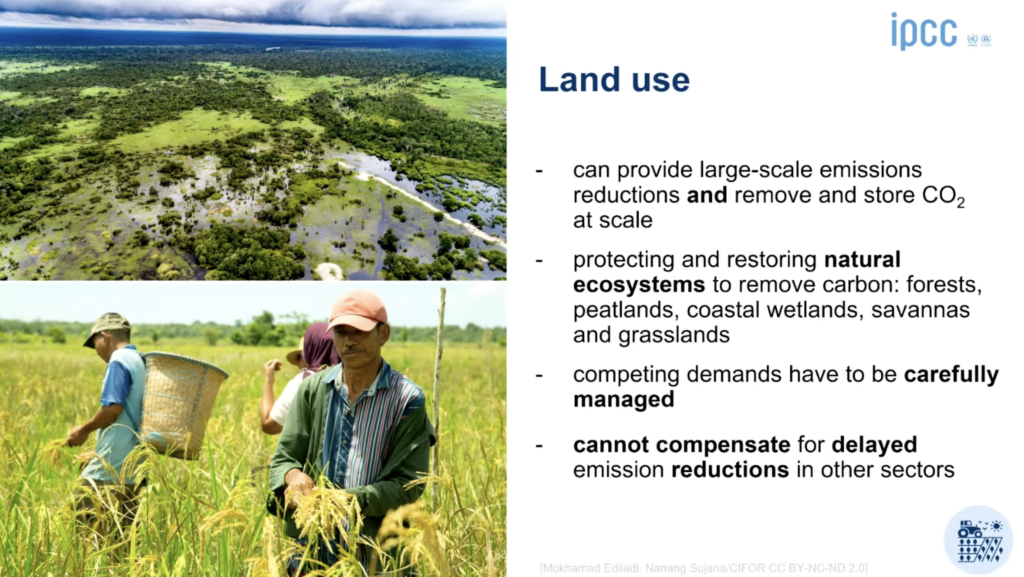 The report also warns that financial investment in mitigation is woefully inadequate – a factor of three to six times below levels that would be needed by 2030 just to limit warming to below 2°C (3.6°F). But again, given political will and investor buy-in, there exists  “sufficient global capital and liquidity to close investment gaps”.

“Climate change is the result of more than a century of unsustainable energy and land use, lifestyles and patterns of consumption and production,” said Skea. “This report shows how taking action now can move us towards a fairer, more sustainable world.”

Antonio Guterres, the United Nations Secretary-General, described the report as “a file of shame, cataloguing the empty pledges that put us firmly on track towards an unlivable world”, warning that the world was currently on track for a 3ºC increase.

“Some governments and business leaders are saying one thing but doing another. Simply put, they’re lying and the results will be catastrophic,” said Guterres in a recorded message.

The latest @IPCC_CH report is a litany of broken climate promises.

Some government & business leaders are saying one thing, but doing another.

It is time to stop burning our planet. https://t.co/xzccxqwvhE

“Climate scientists warn that we are already perilously close to tipping points that could lead to cascading and irreversible climate impacts. But high-emitting governments and corporations are not just turning a blind eye. They are adding fuel to the flames. They are choking the planet based on their vested interests and historic investments in fossil fuels when cheaper renewable solutions provide green jobs, energy security and greater price stability.”

Admitting that it was “not a pretty picture”, UN Environmental Programme Executive Director Inger Andersen said that the past two decades had seen the biggest net increases in climate-warming emissions in human history, “even though we know how much trouble we are in”.

“Half-measures won’t halve greenhouse gas emissions by 2030, which is what we need to do. We need to go all-in,” urged Andersen.