As India restricts COVID-19 vaccine exports to address its domestic surge, the World Health Organization (WHO) is poised to give the Chinese vaccine, Sinopharm, emergency use listing (EUL) this week – potentially catapulting China into becoming the biggest global supplier of COVID-19 vaccines for low- and middle-income countries (LMIC).

However, Sinopharm is reported to be one of the most expensive vaccines on the market, with the most recently reported price $36 a dose paid by Hungary – in comparison to $2.15 for AstraZeneca.

Global vaccine alliance Gavi, on behalf of the COVAX Facility, confirmed to Health Policy Watch on Thursday that it is “in dialogue with several manufacturers, including Sinopharm, to expand and diversify the portfolio further and secure access to additional doses for Facility participants. We will provide updates on any new deals in due course.”

After delivering over 49 million vaccines to 120 countries, the vast majority of which were AstraZeneca vaccines manufactured by the Serum Institute of India (SII), COVAX deliveries have ground to a halt because of domestic demand in India – causing panic in LMICs reliant on COVAX.

China joined COVAX late last year and announced in February that it would be donating 10 million vaccine doses to the facility – but this cannot happen until the WHO grants the vaccines EUL.

WHO Decision on Sinopharm This Week

A decision on Sinopharm is expected by the end of the week, but late last month Alejandro Cravioto, the chairperson of WHO’s Strategic Advisory Group of Experts (SAGE), told a media briefing that both Chinese vaccines, Sinopharm and Sinovac, have presented efficacy data that meets WHO requirements.

“The information that the companies shared publicly at the [SAGE] meeting last week clearly indicates that they have levels of efficacy that would be compatible with the requirements that WHO has asked for this vaccine,” Cravioto told the briefing.

The WHO has set 50% efficacy against the virus as the lowest bar for EUL, and its decision is based on a risk-benefit analysis.

The decision on the other Chinese vaccine, Sinovac, is expected next week, but reports indicate that it has lower efficacy than Sinopharm.

A decision on the Moderna vaccine is expected on Friday, but the WHO has already issued interim recommendations on the use of Moderna and no impediments are expected for it.

“We are on track to make a billion doses this year, and potentially to have up to 1.4 billion doses for 2022,” said Moderna CEO, Stephane Bancel told a press briefing last week, adding that the company is also “in the final stretch to get an agreement with COVAX,” for distribution of the mRNA vaccine.

However, Moderna, like the Pfizer vaccine, needs ultra-cold storage which precludes its use in many low income countries.

COVAX confirmed last week that 90 million AstraZeneca vaccine doses it had expected the Serum Institute to deliver in March and April have been kept for use in India, which is facing a massive surge in cases.

Seth Berkley, CEO of vaccine alliance Gavi, acknowledged last week that COVAX was trying to ”balance the acute needs for India, where there’s a very large population, with the needs of many other countries that rely on India as one of the main vaccine manufacturers for the world”. Gavi co-leads COVAX with the WHO and CEPI.

He confirmed that COVAX was “waiting for when supplies will resume [from India], and we’re looking at other options at the same time”.

Berkley also said that COVAX was “in early days on discussions on dose sharing”.

A Gavi spokesperson explained to Health Policy Watch that dose-sharing can happen “through the transfer of vaccine doses purchased by self-financing participants to the COVAX AMC economies, as pioneered by Norway and followed by New Zealand, or by donating own doses purchased for domestic consumption to COVAX AMC economies, in line with the recent French announcement”.

“We welcome commitments of intention to share doses from other countries, including Spain, and continue to be in close dialogue with these countries who have expressed interest. We expect further announcements on this to take place over the coming weeks and months,” added the spokesperson.

Sinopharm To Produce One Billion Doses This Year

In contrast to the vaccine shortage in India, Sinopharm’s manufacturers claim that they have already sent 50 million vaccines to other countries, according to a report published last week.

By the end of February, China said that it had supplied 69 countries with vaccines – some as donations as some as sales. Recipients include Zimbabwe, Guinea, Egypt, Pakistan, Serbia, the Maldives, and the United Arab Emirates.

Meanwhile, Botswana announced this week that it had bought 200,000 Sinopharm doses to supplement a donation of the same amount.

Bangladesh also turned to China this week after being forced to suspend its vaccination programme when India told the country that it could not deliver its second batch of AstraZeneca vaccines to it any time soon. Six million Bangladeshis have already received one dose of the AstraZeneca vaccine.

China has offered to give Bangladesh 600,000 doses as a donation and the country will buy the rest. However, the cost of Chinese vaccines could cripple LMICs.

On Tuesday, China’s foreign minister, Wang Yi, hosted a virtual meeting of the foreign ministers of Afghanistan, Pakistan, Nepal, Sri Lanka and Bangladesh at which the ministers “agreed to deepen cooperation as South Asian countries are facing a new wave of the COVID-19 pandemic”, according to the Chinese media agency.

According to Wang, China is willing to “promote vaccine cooperation” in South Asia through “flexible methods such as free aid, commercial procurement, and filling and production of vaccines”, to ensure “more diversified and stable vaccine supplies”.

India was invited but did not attend the meeting, but Wang said that “China is ready to provide support and assistance to the Indian people at any time according to the needs of India”. 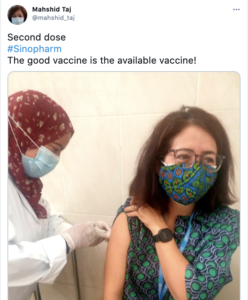 Yu Qingming, chairman of Sinopharm Group, indicated last month that the state-owned pharmaceutical group expected to produce over one billion doses of its vaccine, according to Chinese state media.

Yu added that the annual output of the vaccines could reach three billion doses “in the future”.

Yin Weidong, CEO of Sinovac’s producer, Biotech, said last week that his company was producing six millions doses a day, had sent at least 156 million doses to other countries, and could produce two billion doses this year.

In China itself, by Tuesday over 230 million doses of COVID-19 vaccines had been administered across China, according to Chinese health authorities. But the most populous country in the world estimates that it will be able to cover all 1,4 billion citizens by early next year.

However, both Chinese vaccines are viewed with skepticism in many parts of the world because virtually no independent scientific information is available – only company information.

Sinopharm has claimed efficacy of 79.3% – 86% in multi-country trials, but these results are unpublished.

Interestingly, Serbia recently reported results in which it compared the antibodies of 10,000 citizens vaccinated with Pfizer, Sputnik and Sinopharm – all the vaccines currently in use in the country. 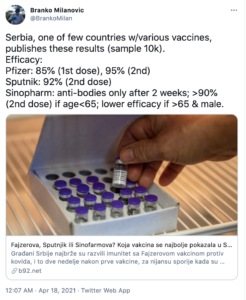 On Monday, the US announced that it would pass 60 million doses of AstraZeneca vaccines on to countries in need “as they become available”, according to Andy Slavitt, White House Senior Advisor on COVID-19.

However, it is unclear when these vaccines will become available as they are supposed to be manufactured by Emergent BioSolutions, the company that recently had to destroy millions of contaminated AstraZeneca and Johnson & Johnson vaccines.

It is also unclear who will receive the doses or how they will be delivered. Gavi would not comment on whether COVAX would receive any of the 60 million US AstraZeneca vaccine doses. A Gavi spokesperson simply said: “We welcome the US Government decision to share surplus doses as a positive step towards addressing the pandemic on a global scale. We will not be safe anywhere until we are safe everywhere.”