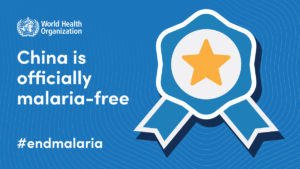 Evidence of the existence of malaria in China has been found carved into bones from the Shang Yin era estimated to be 3000 years old – yet on Wednesday, the country beat this thousands-year-old scourge by getting certified “malaria-free” by the World Health Organization (WHO).

WHO Director-General Dr Tedros Adhanom Ghebreyesus, said China’s success was “hard-earned and came only after decades of targeted and sustained action”.

At its zenith in the 1940s, malaria affected an estimated 90% of the Chinese population with 30 million cases and 300,000 deaths annually, according to a report from Harvard University.

China established a National Malaria Control Programme in 1955, and q2 years later, it launched the “523 Project” – a nationwide research programme aimed at finding new treatments for malaria, according to the WHO – in 1967.

“This effort, involving more than 500 scientists from 60 institutions, led to the discovery in the 1970s of artemisinin – the core compound of artemisinin-based combination therapies (ACTs), the most effective antimalarial drugs available today,” the WHO added.

Professor Tu Youyou of the Academy of Traditional Chinese Medicine, who isolated artemisinin in 1971, was awarded the Nobel Prize for Physiology or Medicine in 2015 for her discovery.

Thinking ‘Outside the Box’

“Over many decades, China’s ability to think outside the box served the country well in its own response to malaria, and also had a significant ripple effect globally,” notes Dr Pedro Alonso, Director of the WHO Global Malaria Programme.

“The government and its people were always searching for new and innovative ways to accelerate the pace of progress towards elimination.”

Aside from discovering artemisinin, China was one of the first countries in the world to extensively test the use of insecticide-treated bed nets to preventi malaria during the 1980s – well before nets were recommended by WHO for malaria control.

In 2010, the country resolved to end malaria within a decade, and 13 ministries – including the health, education, finance, research and science, development, public security, the army, police, commerce, industry, information technology, media and tourism sectors – joined forces to do so.

It adopted a “1-3-7” strategy – a one-day deadline for health facilities to report a malaria diagnosis; confirmation of the case by the end of day three, and take measures to prevent its spread within seven days.

“With support from the Global Fund to Fight AIDS, Tuberculosis and Malaria, beginning in 2003, China stepped up training, staffing, laboratory equipment, medicines and mosquito control, an effort that led to a further reduction in cases; within 10 years, the number of cases had fallen to about 5000 annually.”

In 2020, China applied for an official WHO certification of malaria elimination in after four years of zero cases, and members of the independent Malaria Elimination Certification Panel visited the country last month to verify the country’s malaria-free status and progamme to prevent re-establishment of the disease, according to the WHO.

China has undertaken to assist African countries to eliminate malaria, and it has signed agreements with Burkina Faso, Cameroon, Cote d’Ivoire, Sierra Leone, Tanzania, and Zambia to set up Institutional-based Networks of Cooperation between Africa and China on Malaria (INCAM).