There is “broad consensus” on the need for a “binding pact” to address the threat of pandemics, said World Health Organization (WHO) Director-General on Wednesday – a few days before the World Health Assembly special session devoted exclusively to discussing what many refer to as a pandemic treaty.

“The ongoing chaos of this pandemic only underlines why the world needs an ironclad global agreement to set the rules of the game for pandemic preparedness and response,” Tedros told the media at the WHO’s COVID-19 briefing in Geneva.

“This will be the subject of next week’s special session of the World Health Assembly. The world has treaties to manage other threats. Surely countries can agree on the need for a binding pact on the threats of pandemics?” added Tedros, who described the special session as a unique opportunity to develop a generational agreement.

“I’m encouraged that there is now a broad consensus for the need for such an instrument. We will not achieve everything at the special session. But I hope it will serve as the launching pad for the development of an international agreement,” concluded Tedros.

Not everyone wants a Treaty

However, at the same time in another part of the city, civil society critics expressed concerns that a new Pandemic Treaty would fail to bring about the more fundamental changes that they say are needed in global finance and manufacturing mechanisms – so as to really improve the access of low- and middle-income countries to pandemic-related medicines and vaccines.

Not only that, but critics fear that many low-income countries, still focused on fighting a pandemic, lack the human resources required to advance their interests in negotiations over a new Pandemic Treaty.

The creation of such a new instrument could further fragment global health decision-making, removing certain responsibilities and powers from the direct control of the World Health Organization, said others in a panel discussion sponsored by the Geneva Global Health Hub (G2H2).

The discussion focused on a new G2H2 report that reflected upon countries’ and civil society views about the treaty, entitled, “The Politics of a WHO Pandemic Treaty in a Disenchanted World.”

Rather than focusing on a treaty, stakeholders should look more closely at debt relief and other economic measures that could strengthen health systems in developing countries, which are hobbled by years of internationally-imposed austerity, said Carlos Correa, director of the Geneva-based South Centre.  Without stronger, more durable health systems, countries will remain ill-equipped to battle disease threats, regardless of treaty provisions, he said.

More regionally-based R&D and production of vaccines and medicines, stimulated by a World Trade Organization waiver on Intellectual Property restrictions to stimulate more sharing of pharma know-how is also critical, said Nicoletta Dentico, one of the paper’s co-authors.

But she expressed fears that the drawn-out negotiations over the legal language on a treaty would obscure the need for needed reforms to trade and economic arrangements that deeply affected health.

It is  “not coincidental” that critical WTO waiver discussions are taking place next week, at the same time as the World Health Assembly (WHA) meets on the pandemic treaty, Dentico added, expressing fears that the WHA negotiations would divert attention from the WTO talks, currently deadlocked by European opposition to the waiver initiative.

The report highlighted a number of factors influencing various interest groups’ support for a pandemic treaty, including developing countries wanting a seat at the negotiating table. 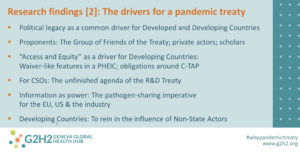 At the same time, Dr Suerie Moon, co-director of the Global Health Centre of the Geneva Graduate Institute, put forward a more positive spin on the Pandemic Treaty proposal.

She compared it to a “potluck dinner” where everyone might bring their own “dish” to the table.  What remains to be seen, however, is if the “tastes will blend together and the wine will match the meal.”

Moon added that while the report adds valuable civil society perspectives to the debate, the two dozen key informat interviews upon which the research was based seemed to reflect too much of a “Eurocentric” viewpoint – and could have benefitted from more inputs from countries in the global South.