Over four million Africans a year could die as a result of antimicrobial resistance (AMR) by 2050, according to WHO’s Africa Region at the start of World Antimicrobial Awareness Week on Thursday.  And if global action isn’t taken to head off risks, nearly nine million of the estimated 10 million people dying around the world from AMR by 2050, will be either Africans or Asians.

“They allow us to treat deadly infections successfully, and make essential health services safer for everyone. However, the overuse and misuse of antimicrobials are the main drivers of drug-resistant pathogens,” he warned in a recorded message as events were held all over the world to draw attention to the threat posed by the growing trend of “superbugs” resistant to existing drugs and treatment.

In light of the growing threats, six global and regional organisations on Wednesday issued an appeal for stronger policies to fight AMR. They included the World Health Organization (WHO), the Food and Agriculture Organization of the United Nations (FAO), the World Organisation for Animal Health (OIE), the UN Environment Programme (UNEP),  the Africa Centres for Disease Control and Prevention (Africa CDC), and the African Union Inter-African Bureau for Animal Resources (AU-IBAR).

The FAO’s Regional Representative for the Near East and North Africa, Dr Abdulhakim Elwaer, said that his organisation, together with the WHO and OIE were establishing AMR multi-stakeholder partnership platforms across all sectors to implement an AMR global action plan.

“The COVID 19 pandemic has shown the ease with which infections can spread, threaten global health security, and destabilise economies, lives and livelihoods,” Elwaer told an African regional AMR meeting on Thursday.

“Trans-boundary animal diseases and zoonotic diseases have a devastating impact on animal production, food security, trade, public health, and economy,” he warned, calling for the responsible use of antimicrobials in animal and plant health.

The estimate of 4.1 million deaths annuall in Africa by 2050 is part of a broader assessment of global health risks that concluded some 10 million people a year could die from AMR by 2050 – mostly in Asia and Africa.  The estimates from the review, conducted in 2014 by an independent commission, co-sponsored by the UK government and the Wellcome Trust, were also highlighted in a major UN assessment of AMR trends and risks, No Time to Wait, published in 2019 just before the COVID pandemic took off.

Worldwide, agriculture is one of the biggest users of antibiotics alongside human health – and in some developed countries like the United States animals may even be the largest consumers of these life-saving drugs.

Dr Yahaya Ali Ahmed, the WHO’s Africa Team Lead for AMR, said that routine administration of antibiotics to animals as a prophylaxis against disease, and to promote growth, is now also a growing practice on the continent – and that is driving resistance too.

In addition, inadequate treatment of sewage, particularly emissions from health care facilities that use and inevitably discharge medicine residues in their waste, provides a media where resistant microbes may breed and multiply.

“These examples highlight that there is really an interface between humans, animals, plants and the environment,” said Ahmed. “If a single sector tries to work alone, it will fail and this is why we really need to adopt an integrated and holistic multi-sectoral, ‘One-Health’ approach in combating AMR.” 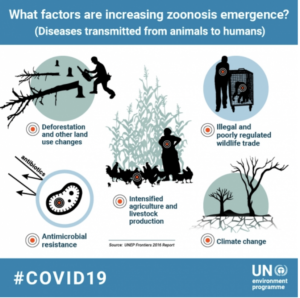 OIE Africa representative Dr Karim Tounkara Africa said that his organisation was working to integrate environmental, aquatic and wildlife issues into the region’s One Health approach.

The wildlife framework aimed to “improve member states’ capacity to manage the risk of pathogen emergence in wildlife and at the human animal ecosystem interface, whilst taking into account the protection of wildlife”, said Tounkara.

“The second objective is about enabling OIE members to improve surveillance systems, early detection and the reporting and management of wildlife of diseases,” he added.

Antibiotic shortages may also drive inappropriate use – leading to AMR

While drug resistance develops from overuse and incorrect use in both people and in animals, it can also be an outcome of antibiotic shortages – when an antibiotic that is already vulnerable to resistance is routinely prescribed because a better one is unavailable.

“In Uganda, doctors write prescriptions based on availability rather than suitability,” according to a report from the Center for Disease Dynamics, Economics & Policy (CDDEP) published in 2019.

In addition, poor medicines regulation in Africa also drives a black market trade – including fake medicinal treatments.  Widespread use of fakes, which may contain weakened formulations of antibiotics or other inappropriate treatments, also enable drug resistant microbes to flourish, leading to more AMR.

Despite the pandemic, Europe sees reductions in antibiotic use between 2019-2020 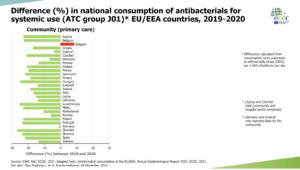 There has been widespread concern that the COVID-19 pandemic may be stimulating AMR trends – in light of the widespread administration of antibiotics to COVID patients to prevent secondary infections – even in cases when the risks were very low.

Nonetheless, Europe saw a net decline in antibiotic use in 2019-2020, according to a recent report by the European  Centre for Disease Prevention and Control (ECDC). The report, showcased at ann event sponsored by the ECDC and the European Union, found that virtually all of the member states of the European Economic Community (EEC) had reduced their antibiotic consumption by 18% in 2019-2020. Bulgaria was the only country that reported increased antibiotic use.

This decrease could be explained by a reduction in respiratory tract infections, thanks to the use of masks, phyical distancing and other measures introduced to curb COVID-19, reported the ECDC.

Even so, the risks of AMR in most regions of the world are mounting – and with them the risk that AMR will lead to the routine loss of more and more lives – if not the next pandemic.

“The World Bank has estimated that, if nothing is done to address the factors driving AMR, it will have the same impact and cost as much as COVID-19, not once, but annually, year after year,” warned Hans Kluger, the WHO’s European Regional representative, at the EU event.