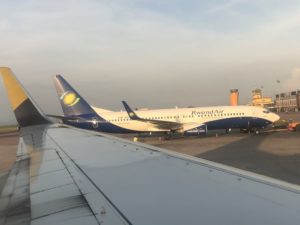 The aviation sector is unlikely to recover before 2024, as new variants, stringent quarantines and costly COVID-19 tests continue to confound international travel – but airline officials have appealed for global cooperation to simplify travel requirements.

In 2020, the global aviation industry lost about $430 billion, according to Kamil Alawadi, the International Air Transport Association (IATA) Vice President for Africa and the Middle East.

While domestic travel in the region has returned to 2019 levels, international travel is yet to recover and it may not fully do so until 2024 unless urgent actions are taken to remove the bottlenecks and regulations that include travel passes, vaccine passports, and conflicting and confusing policies on testing and quarantine.

“The recovery of international travel is very slow because of friction between borders. And looking at the situation today, I think the losses will stop or will reduce to an acceptable level by 2023,” Alawadi said.

According to him, the airlines will only generally start to generate positive revenues and cover previous losses by the year 2024 unless things change dramatically.

He told Health Policy Watch that, before leaving Nigeria, he spent NGN50,000 (over $120) on a PCR COVID-19 test and on arrival in Kigali, he paid for another COVID test ($50) in addition to incurring the cost of the mandatory hotel room for isolation until his COVID test result was available.

Before leaving Rwanda, Yusuf had to pay for another COVID test as the Nigerian government requires every passenger arriving in the country to present a negative test.

Alawadi described this development as a major stumbling block in the aviation industry’s path to recovery.

For a single trip, travellers can spend up to $500 for COVID-19 tests alone, said Yusuf. Moreover, he said the quarantine requirement by several countries is discouraging people from travelling the most.

“We’ve done a number of surveys. Our last survey showed that 84% of the passengers will not fly if quarantine is in place. Additionally, it is unclear today, in many cases, for the average passenger to know what is needed when he travels from A to B. When does he do the PCR test, what sort of certification is needed and so on,” Alawadi said.

To address the issue of testing for travellers within Africa, the Africa Union’s Digital Vaccination Platform, Trusted Travel, was launched to try to simplify the verification of public health documentation for travellers during exit and entry across borders.

However, countries within Africa have been reluctant to fully adopt the service, choosing instead to institute their own protocols that often compel travellers to pay for tests at each point-of-entry.

To ensure the aviation industry fully begins to recover from the impact of COVID-19, Alawadi said more restrictions need to be removed – although the opposite is happening as countries limit travel to contain the spread of the Delta variant, according to Health Policy Watch.

“The removal of travel barriers is a big key to recovery. Right now, what is standing in the way of passengers traveling are the restrictions placed by governments,” Alawadi added.

One of the travel barriers that IATA is concerned about is the introduction of vaccine passports. The European Union’s COVID Digital Green Pass officially goes into effect 1 July. Even though its goal is to ease travel to Europe for vaccinated and recovered passengers, Health Policy Watch recently reported that it does not recognise the most widely administered vaccine in Africa, the version of AstraZeneca manufactured by the Serum Institute of India.

This policy could have a negative impact on Africa’s fragile aviation sector, which lost over $7.7 billion in 2020 alone, with massive job losses and millions more jobs threatened by uncertainties and slow return to normal.

“There are eight airlines that filed for bankruptcy in Africa due to COVID-19 and we do not want to see that continuing in 2021,” Alwadi said.

Regarding the EU Green Pass, Alawadi said the aviation industry was not in support of discrimination in the space that only favors individuals that have been vaccinated.

“We can’t have a situation where only people who have been vaccinated are able to travel internationally,” he noted.

However, he urged countries across the world to accept WHO-approved vaccines to ensure greater consistency and foster trust between governments and travellers.

Even though countries in the EU are going ahead with the vaccination passport policy, the World Health Organization (WHO) has noted that making proof of vaccination a prerequisite for travel may deepen inequities while the vaccines continue to be in such short supply.

“Decisions on vaccine passports are taken at the national level, in line with each country’s unique epidemiological, political, social and economic contexts. At the same time, they require coordination between countries, airlines and interoperable systems,” said WHO Regional Director for Africa, Dr Matshidiso Moeti.

IATA has called on the global community to collaborate to ease travel bottlenecks by streamlining processes and harmonising the numerous passes.

“The focus should be collaborative work with all the stakeholders, including governments, to support the aviation industry (especially in Africa) and prevent any further damage, closure of airlines or the supporting players like the catering companies,” he said.

Willie Walsh, IATA’s Director General, has noted that the international travel metrics will improve when the world’s largest air travel markets, Australia, China, the UK, Japan, and Canada, fully open up. But for now, they remain essentially closed with no clear plans to guide a reopening.

“Data should help these and other countries to introduce targeted policies that keep populations safe while moving towards a normality in the world with COVID-19 for some time to come,” Walsh said.