Little agreement emerged from an informal World Trade Organization (WTO) meeting on Tuesday about whether an intellectual property (IP) waiver should be extended to COVID-19 therapeutics and diagnostics.

But low and middle-income countries (LMIC) that qualify for free COVID-19 anti-virals Paxlovid (nirmatrelvir) and Molnupiravir have shown so little interest in accepting donations that some question whether debating the waiver extension is a waste of time.

Singapore, Switzerland, Japan, Korea, the European Union and the United Kingdom wanted to see proof of IP barriers hampering access to therapeutics and diagnostics before they supported any waiver extension, according to a Geneva-based trade official at the WTO meeting.

Meanwhile, Switzerland and Mexico argued that the ship has already sailed as there is little demand for therapeutics.

The WTO’s TRIPS Council has until 17 December to decide on whether to extend June’s Ministerial Decision on a patent waiver on COVID-19 vaccines.

But at Tuesday’s meeting, there was no new movement towards consensus, according to the trade official.

Parties still pushing for the waiver include South Africa, India, Sri Lanka, Nepal, Nigeria and Indonesia – all part of the core group that first introduced the notion of a TRIPS waiver for all COVID-related products.

Meanwhile, China and Mexico are part of a group that supports a limited waiver on specified products.

Shortly before the WTO meeting, Oxfam and the People’s Vaccine Alliance (PVA) decried the fact that rich countries have secured almost three times as many courses of a World Health Organisation (WHO)-recommended COVID-19 medicine, Pfizer’s Paxlovid.

“Just a quarter of orders for the treatment will go to low- and middle-income countries (LMICs), despite the fact they make up 84% of the world’s population and have a much greater need as far fewer people are vaccinated against COVID, unlike rich nations which are largely protected,” said the two bodies in a media statement this week, warning of “the same worrying trend of inequity that we saw with COVID vaccines”.

However, the International Federation of Pharmaceutical Manufacturers and Associations (IFPMA) disputed this, saying that “of the 105 lower-income countries eligible for COVID-19 treatments coordinated by the ACT Accelerator, very few countries have expressed an interest and barely a handful have so far placed very low volume orders.”

“The lack of demand means that, of the 38 generic companies lined up to produce Paxlovid and the 27 companies with licenses for Molnupiravir, there is currently barely a market for even a handful of companies to operate,” the IFPMA told Health Policy Watch.

The Oxfam-PVA figures were drawn from Airfinity, an independent provider of global health analytics and data.

Airfinity’s CEO, Rasmus Hansen, told Health Policy Watch that it was correct that only around 25% of purchased doses of Paxlovid were going to LMIC.

“But it’s a bit of a mistake only to look at that number without looking at some other demand indicators,” Hansen added.

One important indicator was the demand for Paxlovid doses from countries that qualified for the medication for free through the ACT Accelerator, he added.

“Only around 7% of the Paxlovid doses that are available for donation have been accepted by low-income countries. When I saw that number, I was really surprised you because that’s not a pricing issue,” said Hansen. 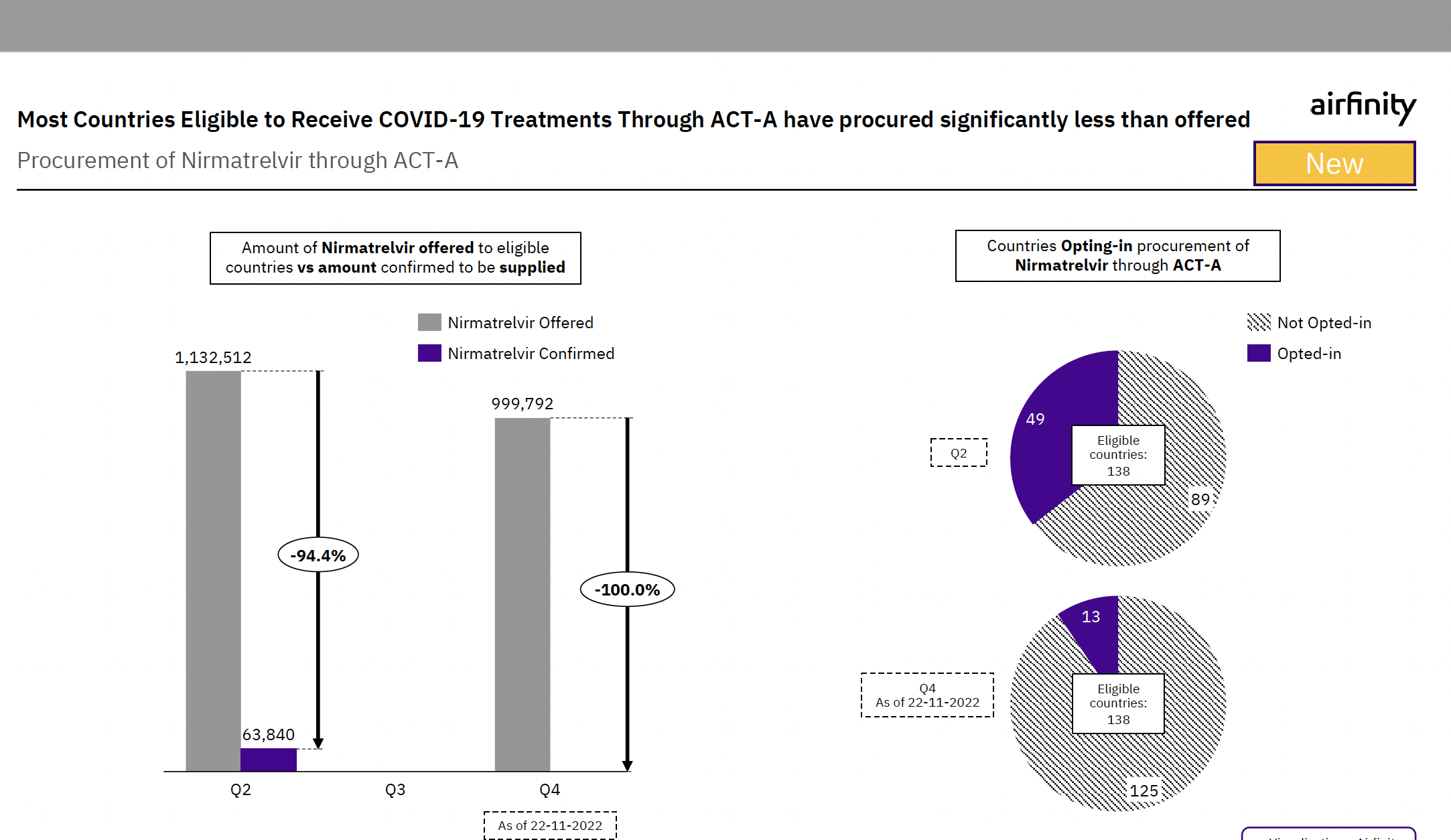 Meanwhile, the total demand from LMICs for both WHO-approved antivirals – Molnupiravir and Paxlovid – available free via the ACT-Accelerator had only reached 13%, and there had been zero demand for either medication in the fourth quarter of the year, said Hansen.

‘This available number of doses is not even the full 25% of doses available for donation. I think this is about 10% of the donations promised,” he added. 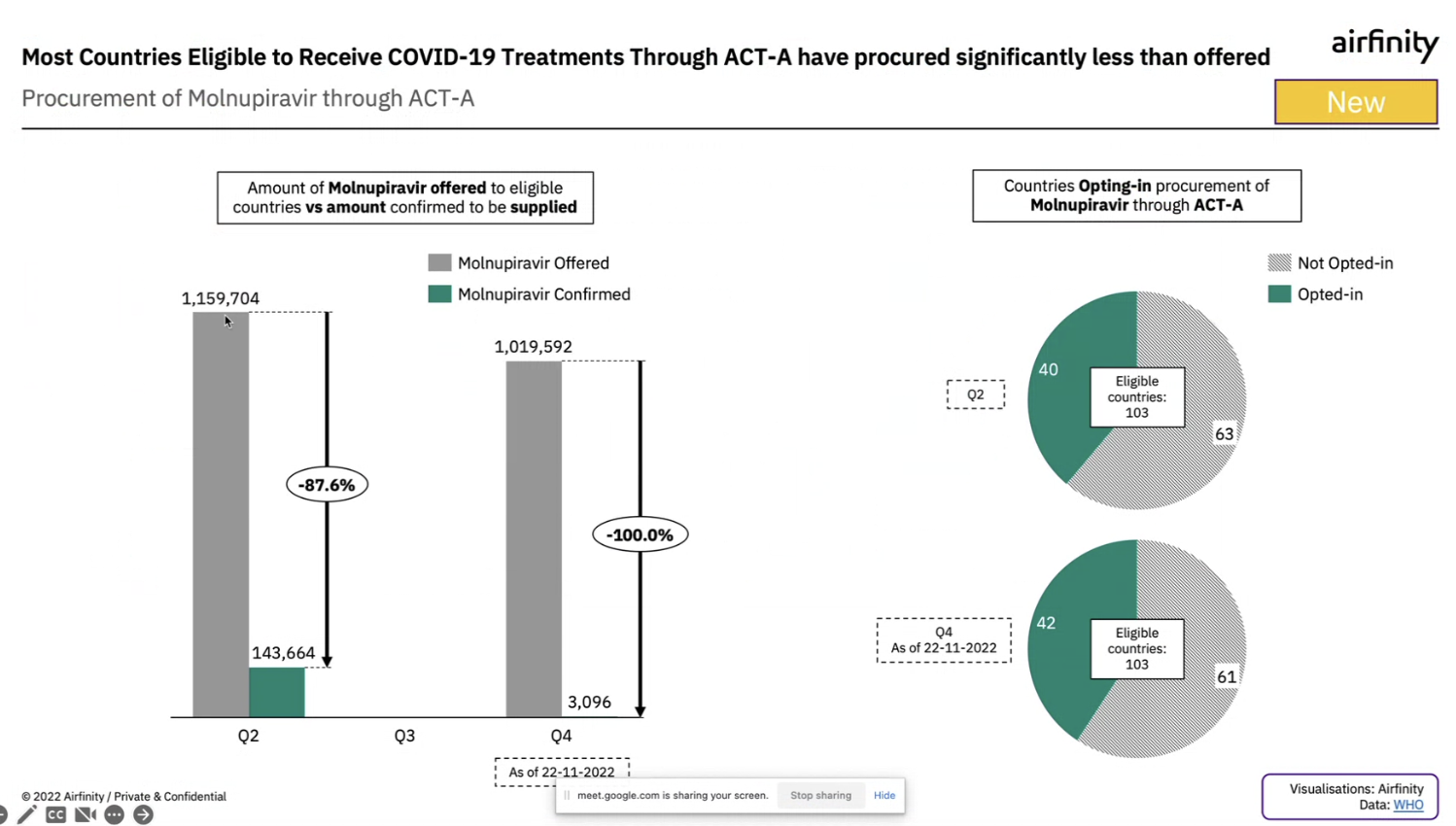 “The story is more complicated than doses not being available. There seems to be an issue with a country’s ability or willingness to use the medicine.”

Hansen speculated that factors influencing this could include countries’ inability to conduct systematic COVID-19 testing as antivirals have to be given early to prevent serious illness, as well as them having other health priorities.

He also said that a country might not accept a donated drug not because they didn’t need it but because they lacked the capacity to roll it out.

Hansen also said that the lack of data about hospitalizations, particularly in Africa, meant that deciding on what was needed “is a little bit like shooting in the dark because we don’t actually have factual data on how many are severely ill by COVID”.