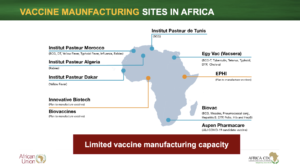 African vaccine producers supply just 1% of the continent’s needs at present – but the plan is to increase this to 60% by 2040, according to John Nkengasong, Director of the Africa Centers for Disease Control (CDC).

“The vision is to ensure Africa has timely access to vaccines to protect public health security, by establishing a sustainable vaccine development and manufacturing ecosystem in Africa,” Nkengasong said at the opening of the two-day African Vaccine Manufacturing Virtual Conference on Monday.

There are currently 10 pharmaceutical manufacturing companies on the continent.

If Africa is able to effectively leverage its capabilities, Nkengasong said the continent can vaccinate 60% of its people against COVID-19 by 2022.

By 2040, he said Africa can be fully responsible for the manufacture of vaccines of three emerging diseases including Ebola,Lassa fever and Rift Valley disease; have capacity to manufacture vaccines for unknown global pandemic for up to 60% of its population, and should be able to meet 60% of its routine immunisation.

In March 2021, South Africa’s largest pharmaceuticals maker, Aspen Pharmacare, announced it was involved in a technology transfer that will enable it to commence the supply of 200 million Johnson & Johnson COVID-19 vaccine doses before the end of June.

Dr Stavros Nicolaou, the company’s Senior Executive for Strategic Trade Development, told the conference that African governments need to ensure the availability of economies of scale, and to ensure the economies are sustainable.

“We cannot any longer sustain this continuous dependence on imports, particularly in the midst of a pandemic that we’re witnessing today, and for that matter any future pandemic,” Nicolaou  said.

He said that the governments of Italy and France had approached Aspen for anesthetic and other supplies during the pandemic last year.

He added that African governments and the continent’s major donor agencies have active roles to play in supporting local manufacturing through long-term contracts and guarantees of tax.

“Right now, with importing reigning supreme, there is no real support for localization and local efforts. It becomes very difficult to attract and retain investors. Without guarantees, we will not succeed,” he added.

To start with, he said Africa needs to look beyond vaccines and expand its target to medical equipment and local companies that are involved in their production across the continent.

“We need to identify more of these facilities, leverage the volumes, regionally, and the entirety of the continent, and look to see how we leverage those volumes, into our domestic manufacturing plants across the country. So we start establishing these economies of scale, and we grow from there,” he concluded.

He said that Africa can prioritise vaccines like the human papillomavirus (HPV) vaccine that are complex and expensive globally, as well as vaccines against meningitis.

Maaroufi added that Africa should also prioritise vaccines to respond to the epidemiological threats of emerging diseases such as Ebola and rabies.

“And the reason I say this is because these kinds of products are very expensive, on a global level. It’s very hard to buy them because the demand is low and are limited to a few countries,” Maaroufi said.

Notably, Maaroufi added that Africa can also focus on improving the local production of anti-snake venom and similar treatments that are specific and peculiar to Africa.

“We need to prioritize this kind of production which is very specific to the scorpions and other serpents that exist in our continent,” he added.

Africa needs to be able to produce up to 200 million doses of COVID-19 vaccine, according to Dr Amadou Alpha Sall, Director of the Institut Pasteur de Dakar in Senegal.

He noted that new technology could accelerate the pace towards closing the wide gap that exists in Africa’s vaccine manufacturing landscape.

“This action-oriented approach is something that we learn not only from the vaccine perspective but also we’ve learned from the diagnosis process,” he said.

Sall was referring to the $1 COVID-19 test kits that were developed by the Institut Pasteur de Dakar in collaboration with the British biotechnology company Mologic and the IRD, the French National Research Institute for Sustainable Development.

He added that Africa also needs to figure out long-term funding and identify partners that will commit to the venture for a long-term.

“It’s not just about putting money on a regular basis but also about building business models that are very relevant to Africa,” he added.

He opined that attention should be focused on Africa’s peculiarities—putting into consideration the continent’s specificity in order to identify the unique business model that would be financially sustainable and at the same time make high quality products with affordable access.

“These would be something that is critically important and that’s where the value of partnership is important. We need to put together a great foundation that will support these initiatives while at the same time, mobilizing some domestic funds,” he added.

Despite the enormous tasks ahead, Sall said the coordination of the African Union through the Africa CDC could and should enable the continent to achieve the set goals.

“With the coordination through platforms and hubs, we can build in different regions, capacity to be involved. To provide vaccines to everybody seems to be critical to coordination is really key,” he added.

Ngozi Okonjo-Iweala, Director-general of the World Trade Organization (WTO), told the conference that the organisation intends to create a framework to prevent “vaccine hoarding” in future pandemics.

She also revealed that the WTO will hold a meeting this week with vaccine manufacturers to discuss trade barriers and how to increase the production of COVID-19 vaccines.

This initiative comes as the effort by India and South Africa to get pharmaceutical manufacturers to waive their intellectual property rights to COVID-related medicines and products, appears to have stalled.

In the weeks leading to the conference, Health Policy Watch reported stakeholders in public health on the continent warned against vaccine wars and expressed worry regarding the fate of Africa which they said is a victim of an unfair distribution of the already approved COVID-19 vaccines.

While countries in the Western world have more than enough doses for their citizens, African countries that got some doses of vaccines through COVAX Facility are already running out of supplies and developments elsewhere, including in India, suggested they may not get additional doses anytime soon.

“The current COVID-19 pandemic presents a great opportunity to harness the various conversations and proposals into an action-oriented roadmap led by the African Union and the World Health Organization (WHO) in Africa. And this will lead to increased vaccine production that will facilitate immunization of childhood diseases and enable us to control outbreaks of highly infectious pathogens,” said William Kwabena Ampofo, Chairperson of African Vaccine Manufacturing Initiative.