The latest wave of the COVID-19 pandemic in India has delayed vaccine delivery to African countries and is expected to adversely affect vaccine roll-out programs and the continent’s response efforts until the third quarter of the year.

The Indian government’s decision to suspend exports of the vaccines from the Serum Institute of India (SII) to countries in Africa will further prevent public health agencies from maintaining specific vaccination schedules in a predictable manner, especially from mid-April to July, according to  Dr John Nkengasong, Director of the Africa CDC.

Speaking during a press briefing on Thursday Nkengasong said: “If the shipment of vaccines was not interrupted because of the situation in India, we would have had a nice coverage between now to June, and then from June or July onwards, our own deliveries will kick in and even more COVAX deliveries will come in”.

“In a good vaccination program, predictability of availability of vaccines is very, very important so that you know when and how to use your first doses and how to counsel people that have received their first doses to come in for a second dose. The situation with the Serum Institute and the government of India makes it very complicated for our vaccination program across the continent,” Nkengasong added.

India is battling a new wave of COVID-19 infections. On April 7, the pandemic reached a new peak with nearly 127,000 confirmed cases — the highest number of daily confirmed cases in the country since the pandemic began. To control the spread of the pandemic, several major cities including Mumbai and New Delhi have imposed curfews and the government aims to vaccinate as many people with doses of vaccines produced in the country within a short period of time.

Dr Matshidiso Moeti, World Health Organization’s (WHO) regional head for Africa however said that despite the delay in the India shipments, more vaccine  deliveries were expected in the coming weeks from the COVAX facility to several African countries including Guinea, Guinea-Bissau, Mauritania, Niger, Cameroon and the Comoros.

Moeti said several African countries that had initially received vaccine shipments have already exhausted more than two-third of their supplies. With no information on the next shipment dates, WHO said it is guiding countries on how to optimise the national deployment of the available doses while also working with key partners to scale up Africa’s vaccine production capacities.

“But we recognize that this cannot be achieved overnight, short term solutions are needed, that prioritize vaccine equity [as] Africa is already playing COVID-19 vaccination catch up,” Moeti said. 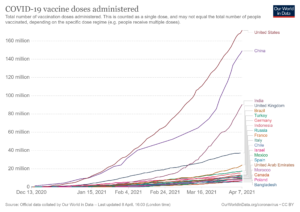 The COVAX facility led by Gavi announced in a statement today that it has reached 100 economies just 42 days after the first international delivery of vaccine – it expects to deliver doses to all participating economies that have requested vaccines in the first half of the year.

Gavi said over 38 million doses of vaccines from manufacturers AstraZeneca, Pfizer-BioNTech and SII have been delivered.

Dr Seth Berkley, Gavi  CEO,  said there were still several challenges with vaccine delivery as  the world seeks to end the acute stage of the pandemic.

“We will only be safe when everybody is safe and our efforts to rapidly accelerate the volume of doses depend on the continued support of governments and vaccine manufacturers. As we continue with the largest and most rapid global vaccine rollout in history, this is no time for complacency,” Berkley said.

The Africa CDC and the WHO said despite the latest report from the European Medicines Agency (EMA) regarding the Oxford/AstraZeneca COVID-19 vaccine, African countries can still continue to roll out the vaccine noting that the occurrence of the blood clot findings is very low and does not warrant a suspension of ongoing vaccination efforts.

“I just like to emphasize how very few people this is compared to those that have received the vaccine. So about 200 million people have received the (AstraZeneca) vaccine and about 100 to 200 cases of this manifestation have been found, so it is an extremely rare event,” Moeti said.

While WHO and its partners are analysing the date, the global health body said it will continue to recommend the vaccine because the benefits outweigh the risks.

“If you look at the millions of people that have died of COVID-19, compared to those that have been vaccinated, and a very tiny number that have manifested this side effect. We will continue to recommend its use,” Moeti said.

Nkengasong said there has  been no reported case of the side effects of AstraZeneca in Africa.

“We and others including the WHO, have also put in place a system to continue to monitor the side effects and rare occurrences of any other events across Africa,” Nkengasong said.

The Africa CDC and WHO further expressed concerns regarding the growing calls for vaccine passports which they said could be discriminating against Africans who would have received the vaccines if enough doses were available in their countries.

Vaccine passports for COVID-19 continue to be a polarising debate across the world. Similar to a country’s national passport, holders of vaccine passports could gain entry into venues for crowded concerts, it could also be required by foreign countries as proof of vaccination against COVID-19 as another requirement for entry other than valid national passport. Even though it is considered to be likely legal, vaccine passports are on track to become the latest divide in the global fight against the COVID-19 pandemic.

Nkengasong told Health Policy Watch any imposition of a vaccination passport will create and exacerbate huge inequalities. “We already are in a situation where we don’t have vaccines, and it will be extremely unfortunate that countries impose travel requirements of vaccine immunisation certificates, whereas the rest of the world has not had the chance to have access to vaccines — not because the continent doesn’t want to be vaccinated, they just don’t have the vaccine.”

According to him, there are African countries that have the money to get vaccines, but there are no vaccines to be acquired. “So our position is clear that we cannot at this point impose it. It will be inappropriate to impose vaccination passport requirements, given where we are in the rollout of vaccination across the continent,” he said.

Moeti is of the view that vaccine passports can only be used for vaccines that are widely and equitably available across countries. “This is not yet the situation with the COVID-19 vaccination,” she said. “We would like to encourage the imposition of vaccine passports, as a condition for people to gain entry into countries not be applied, while we work together at the global level.”