First came the dry cough. Then the shortness of breath and fever.

But what Noely, a 32 year old COVID-19 patient in Lima Peru, hadn’t expected, was her lost sense of taste, worsening anxiety, and impaired motor function.

“At first, I had symptoms of atypical pneumonia, with a lot of chest pain, and I lost my sense of taste. When the disease was really bad, I slept for five consecutive days,” she told Health Policy Watch.

New symptoms appeared, such as an increased agitation around everyday chores like feeding her dogs or while cooking – so severe she had to escape to her bed to calm down. And Noely found that after her bout of illness, she would frequently burst into tears.

“The doctors gave me a muscle relaxant, as I was tense and agitated. Even before I was infected with COVID-19, I wanted to get tested for ADHD, but now I’m sure I’ve developed some condition I didn’t have before…I can’t function normally,” she said. “I felt overwhelmed, I cried and I prayed to get better.”

Over the past few months, a growing body of evidence has painted an insidious picture of SARS-CoV-2, the virus that causes COVID-19, as much more than a simple acute respiratory pathogen. The virus appears to be able to attack multiple organ systems – and patients can be left with long-lasting lung damage, kidney failure, and cardiovascular damage – especially those who are critically ill.

Now, it is becoming apparent that coronavirus can also hit the brain – even in those experiencing only mild respiratory symptoms.

“Many elderly patients came in with altered mental status, but instead of being lethargic, they were aggressive or combative, and would have COVID-related encephalopathy [damage to the brain]”, according to one emergency medicine physician who worked in the Bronx, the borough with the highest rate of COVID-19 cases in the United States’ original epicentre – New York City.

A handful of COVID-19 patients presented in the emergency room with classic symptoms of stroke, such as being unable to move one side of the body, the physician, who wished to remain anonymous, told Health Policy Watch.

But strikingly, younger patients such as Noely are also reporting neurological and psychiatric complications after their initial infection.

Severe neurological symptoms were reported in patients as young as 16 in a study that followed a cohort of 43 COVID-19 patients from UCL Queen Square National Hospital for Neurology, published 8 July 2020 in the journal Brain.

“”We should be vigilant and look out for these complications in people who have had Covid-19. Whether we will see an epidemic on a large scale of brain damage linked to the pandemic—perhaps similar to the encephalitis lethargica outbreak in the 1920s and 1930s after the 1918 influenza pandemic—remains to be seen,” joint senior author of the Brain study, Michael Zandi, said in a press release.

Additionally, a UK-wide surveillance study published in the Lancet found that “acute alterations in mental status were disproportionately overrepresented in younger patients in our cohort.

“These early data identify that acute alterations in mental status were disproportionately overrepresented in younger patients in our cohort…this symptom typically predominates in older groups,” the authors, from Universities of Oxford, Cambridge, Edinburgh, and Boston, among others, wrote in Lancet Psychiatry. 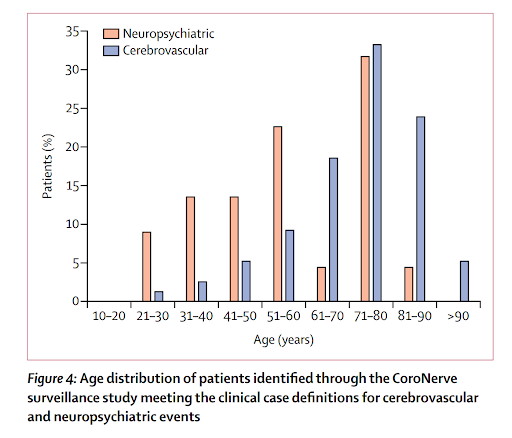 An Unpalatable Surprise From COVID-19

In late March and April, leading neurologists were surprised by the fact that an unusually high proportion of patients were experiencing an impaired sense of smell and taste. About 40% of patients with COVID-19 had these symptoms, according to systematic review and meta-analysis analyzing data from over 8000 patients from late May.

But the new paper published in Brain describes more serious neurological symptoms such as hallucinations, encephalitis (or dangerous swelling of the brain), and hemorrhagic changes such as microbleeds in patients who experienced varying symptoms.

Most worryingly, there were nine patients with acute disseminated encephalitis (ADEM), a rare but deadly condition where the body’s own immune system attacks myelin – the protective covering around nerves.

Seven of the patients also presented with Guillain-Barré Syndrome (GBS), a rare condition where the body’s own immune system attacks the nerves, causing weakness and muscle paralysis. Two of the patients have yet to recover from GBS at the time of the study’s publication.

Ischaemic stroke, a condition caused by blood clots blocking the delivery of oxygen-rich blood to the brain, causing brain cells to die within minutes, was reported in eight patients. The youngest stroke patient was 27 years old.

In late June, a study  in The Lancet identified a “large group” of patients with “altered mental status”, reflecting both neurological and psychiatric diagnoses, such as encephalitis and psychosis in the United Kingdom.

Out of 125 patients identified with neurological and psychiatric complications across the UK, 77 (62%) had cerebrovascular events – mainly ischaemic stroke or intracerebral hemorrhage. If these complications aren’t treated in time, patients can die, or be left with permanent brain damage due to lack of oxygen to the organ.

The second most common symptom in about a third of patients (39/125) were ‘acute’ alterations in mental status – or changes in personality, behavior, cognition, or consciousness. Of those 39 patients, 16 had some form of encephalopathy and 23 had psychiatric diagnoses like new-onset psychosis, a neurocognitive ‘dementia-like’ syndrome, and an affective disorder.

However, the Lancet study may have overrepresented critically ill patients, said the researchers, and it is still unclear how common these symptoms are in COVID-19 patients overall.

Early Warnings Of SARS-CoV-2’s Effect On The Brain

The first warnings of COVID-19’s potential to cause neurological damage came from the original epicentre – Wuhan, China – where the virus first emerged. Over a third of coronavirus patients in a cohort of 200 had neurological symptoms such as acute cerebrovascular events, impaired consciousness, and muscle injury, according to a retrospective study published in early April.

“We now know that COVID-19 is not just a disease of the lungs”, said David Werring, Professor of Clinical Neurology at UCL and corresponding author of a letter published in the Biomedical Journal. “Our findings suggest that blockages of large brain arteries in COVID-19 patients are associated with highly abnormal blood clotting.”

But perhaps SARS-CoV-2’s effects on the brain were truly first hinted at by its deadly sister coronavirus – Middle East respiratory syndrome (MERS), which has a case-fatality rate of 35%. In Saudi Arabia’s MERS epidemic five years ago, scientists documented seizures, confusion and encephalopathy in patients struck by the disease.

SARS-CoV-2 has a deadly trick up its sleeve – the ability to make the body turn on itself.

In some severe COVID-19 cases, the patient’s own immune system overreacts to the disease,  unleashing a wave of cytokines and inflammatory cells that damage the lungs and can even lead to death.

This so-called ‘cytokine storm’ could explain how COVID-19 ravages other organs like the kidneys or the brain. Many of the rare neurological conditions seen in COVID-19 patients, such as GBS and ADEM, are caused by an overreaction of the immune system.

Excessive inflammation could even be the trigger for blood clots that lead to ischaemic strokes, according to a letter by researchers from UCL and the NHS.

While clinicians can look for evidence of a clot on brain scans, researchers can also measure the level of D-dimer in patient samples, a blood product that’s associated with blood clotting. All six patients that suffered from strokes in the UCL study had “markedly” high levels of D-dimer.

However, researchers warned that their data is not conclusive, as four out of six patients already had a history of hypertension, and two had atrial fibrillation – predisposing them to blood clots.

If used at an early stage of COVID-19 disease, blood thinners “could reduce” the number of people having strokes or blood clots elsewhere in the body, said UCL’s Werring in a statement:

“Early use of anticoagulant [blood thinners] drugs might be helpful, but this needs to be balanced against their brain bleeding risk, especially soon after an ischaemic stroke,” according to Werring. However, he added that more trials would be needed in order to find the best combination of drugs to treat people with COVID-19 related strokes.

“Clinical studies (ideally controlled trials) are needed to find out the best treatment to reduce the disability caused by ischaemic stroke in people with COVID-19,” said Werring.

Some researchers have also pointed to the most common and effective method for treating stroke – endovascular treatment – or the removal of a blood clot. Removing the blood clot works for “most people with acute ischaemic strokes,”  irrespective of patient characteristics or geographical location.

However, time is of the essence for this procedure. The earlier a stroke is treated,the less likely it is to cause severe, long-lasting damage, according a Nature opinion written by Johanna M. Ospel and Mayan Goyal in July.

But lockdowns, combined with shortage of trained healthcare staff, could prevent patients from receiving treatment in a timely manner.

“Our findings emphasise that even during the lockdown people with suspected stroke must attend hospital immediately to ensure they get the best treatment,” emphasized Werring.