A standardized set of more than 80 compounds with known or predicted activity against SARS-CoV-2, the virus that causes COVID-19, has been compiled by the Medicines for Malaria Venture in an effort to catalyze the discovery of drugs for the disease.

The announcement comes amidst rapid shifts in the research around potential COVID-19 treatments. Just this week, the much-hyped antimalarial hydroxychloroquine lost favor as a potential treatment when preliminary data from the two large clinical trials showed it did not decrease mortality in COVID-19 patients. Fresh hope was pinned on the anti-inflammatory drug dexamethasone, a relatively new player, after results from the United Kingdom’s Recovery Trial found it was associated with a dramatic reduction in mortality in patients suffering from severe COVID-19.

“”Recent reports of the efficacy of dexamethasone for treatment of COVID-19 highlight the value of exploring all options for new treatments,” Dr Timothy Wells, MMV’s Chief Scientific Officer, told Health Policy Watch. “With MMV’s COVID Box we have combed through the scientific data to identify a collection of compounds with claimed or predicted activity against the virus – to our knowledge this is the only attempt to prepare and distribute such a compound set.”

The COVID Box contains some 80 marketed drugs and compounds in development that could potentially be used to treat the virus, and will be available free-of-charge by request to any scientists seeking to research potential treatments for the disease.

In return, researchers using the box are asked to publish their findings in open-access domains, thus making it faster to share relevant information on any of the candidate compounds.

The Box is ‘complementary’ to other initiatives to accelerate new tools for combatting the COVID pandemic, added an MMV spokesperson. Pooling all compounds with activity against the virus in one place gives scientists a base to start narrowing down potential treatment candidates.

Launch of the COVID Box launch follows on from an earlier initiative, the Pandemic Response Box launched by MMV and the Drugs for Neglected Diseases Initiative (DNDi) in 2019. That set contained over 400 compounds with antibacterial, antiviral, or antifungal properties that could potentially be used to combat the next pandemic threat. The advent of the COVID-19 pandemic prompted MMV’s scientists to begin combing through the data on compounds with specific activity against SARS-CoV-2 and 30 related viruses. This led to the selection of the initial 80 compounds in the box. Another 80 compounds will soon be added to the Box, according to an MMV press release. 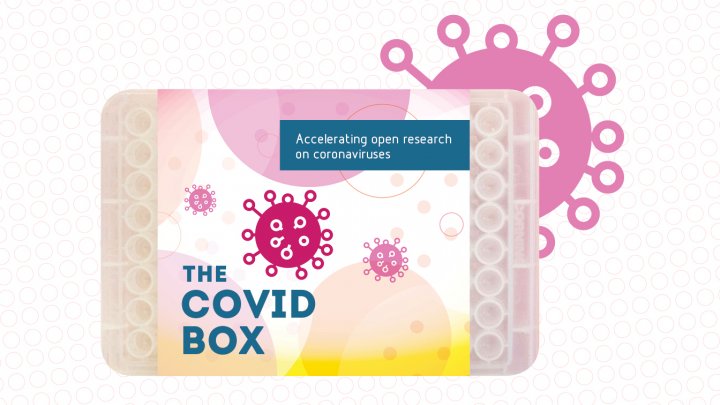 Dr Sara Cherry’s Virology lab at the University of Pennsylvania has been screening many of the compounds in the original Pandemic Response Box to test for those that may block entry of the SARS-CoV-2 virus into human lung cells.

“Pretty early in the game, we began screening [compounds] using an assay that we developed where we basically take cells, we add drugs, and then we add the virus. And then we look at the viral infection in the cells to see if there are compounds that block infection,” explained Dr Cherry.

And even in lab experiments, compounds can react differently to the virus based on the type of cell model used, according to Dr Cherry.

For example, earlier studies of compounds with potential activity against SARS-CoV-2 used a cell line derived from the kidneys of African green monkeys, called Vero, which can easily be infected by novel viruses, thus making it easier to reproduce in large quantities for large studies screening many different compounds.

But Cherry said that while the Vero cell may be simpler to set up as a cell model, it does not most accurately mimic how SARS-CoV-2 attacks the human lungs.

“We found that very few of the drugs that people reported are antiviral in Vero cells are active in [our lung cell model],” said Dr Cherry. Many of the molecules in the same family of drugs as hydroxychloroquine for example, can help block the virus from entering the Vero cell line, but do not block the virus from entering a lung cell, which may partially explain hydroxychloroquine’s lackluster performance in recent clinical trials.

“What this tells you is that the virus can enter cells in different ways, and we should really be focusing on [how it enters] lung cells, because that’s where the problem is during human infection,” said Cherry. A promising candidate compound is camostat mesylate, which blocks  the TMPRSS2 protease, a key protein that helps SARS-CoV-2 enter lung cells.

“With this move towards open science, I think it’s been really helpful for everyone to learn about what drugs might be active against the virus,” said Dr Cherry. “That level of data sharing could move everything faster to potentially help people. So I think MMV, by collating this all together and providing a resource is really very valuable for everyone.”