Around two-thirds of Africans with non-communicable diseases (NCDs) die prematurely – before the age of 70. In Europe, less than a third of people living with NCDs die that early.

This is just one of the stark statistics contained in the most extensive data-visualization tool yet produced by the World Health Organization (WHO) to assist countries in identifying the scale and costs of the global NCD crisis.

The launch of the tool, accompanied by a landmark report, coincides with the first high-level meeting of the Global Group of Heads of State and Governments on NCDs at the United Nations General Assembly (UNGA) on Wednesday.

The closed-door UNGA meeting is a follow-up to the launch in April of the Presidential Council on NCDs, announced at an international meeting hosted by the presidents of Ghana and Norway.

“Almost three-quarters of global deaths are due to NCDs, and yet these numbers remain invisible and under-addressed,” said Dr Leanne Riley, report author and unit head of surveillance, monitoring and reporting at WHO’s NCD division. “We hope to shine a light on these by bringing out the portal and report.”

While NCDs like diabetes and cardiovascular disease have long been portrayed as the problems of rich countries, the data shows this view to be outdated with more Africans succumbing to such disease than elsewhere.

“This report is a reminder of the true scale of the threat of NCDs and their risk factors: every year, NCDs claim the lives of 17 million people under the age of 70 – one every two seconds,” said WHO Director General Dr Tedros Adhanom Ghebreyesus. “NCDs affect all countries and regions, but by far the largest burden falls on low- and middle-income countries, which account for 86% of premature deaths.”

Air-pollution, a key risk-factor disproportionately affecting people in LMICs and responsible anually for 16% of all premature deaths around the world, is included in the portal’s data under “chronic respiratory diseases”. However, it isn’t included as a separate risk factor in the same way as obesity, diet, tobacco, alcohol and lack of physical activity.

“The relative risk of dying from an NCD prematurely is two to three times higher in a low- or middle-income country than in a rich one,” said senior WHO adviser Doug Bettcher at a closed-door press conference last week. “The risks are far greater in the least developed countries.”

Meanwhile, Bente Mikkelson, Director of WHO’s NCD division, said: “The data paints a clear picture. The problem is that the world isn’t looking at it.” 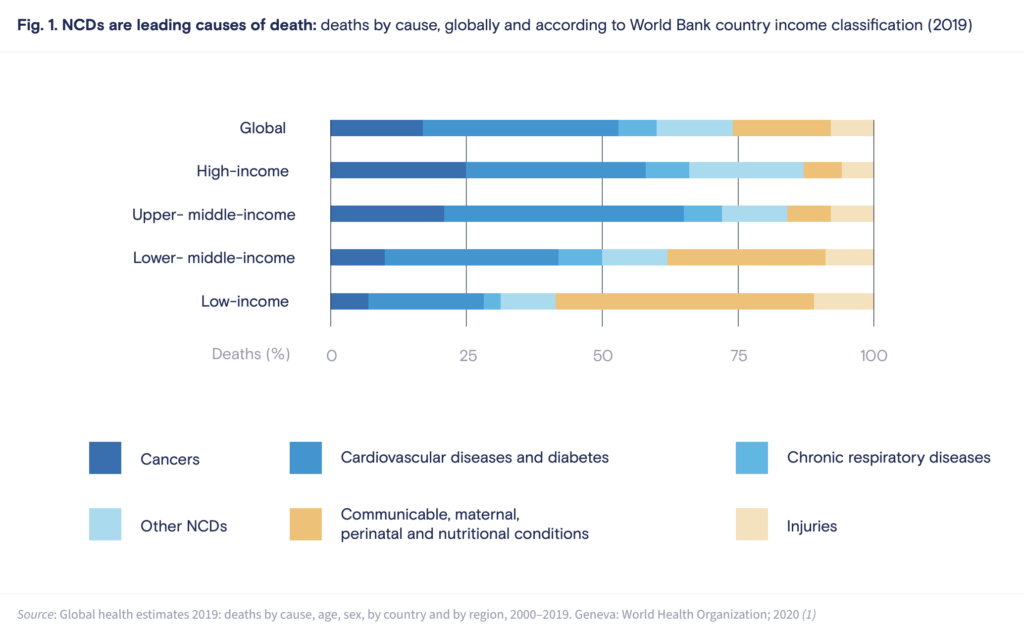 A rich country problem? The data can be misleading

“There has been this perception for a long time that NCDs are a problem for rich countries, but this is absolutely not the case,” Riley said of the report’s findings. “So many of these premature deaths are occurring in low- and middle-income countries where the services may not be as well developed to address them.”

A cursory dive into the data available on the newly released portal reveals where this misunderstanding can be construed from. First, a look at the percentage of total deaths due to NCDs shows an apparent heavy burden carried by the world’s wealthiest regions.

But when the perspective is flipped to the percentage of NCD deaths occurring prematurely – at or under 70 years of age – suddenly the picture changes dramatically. 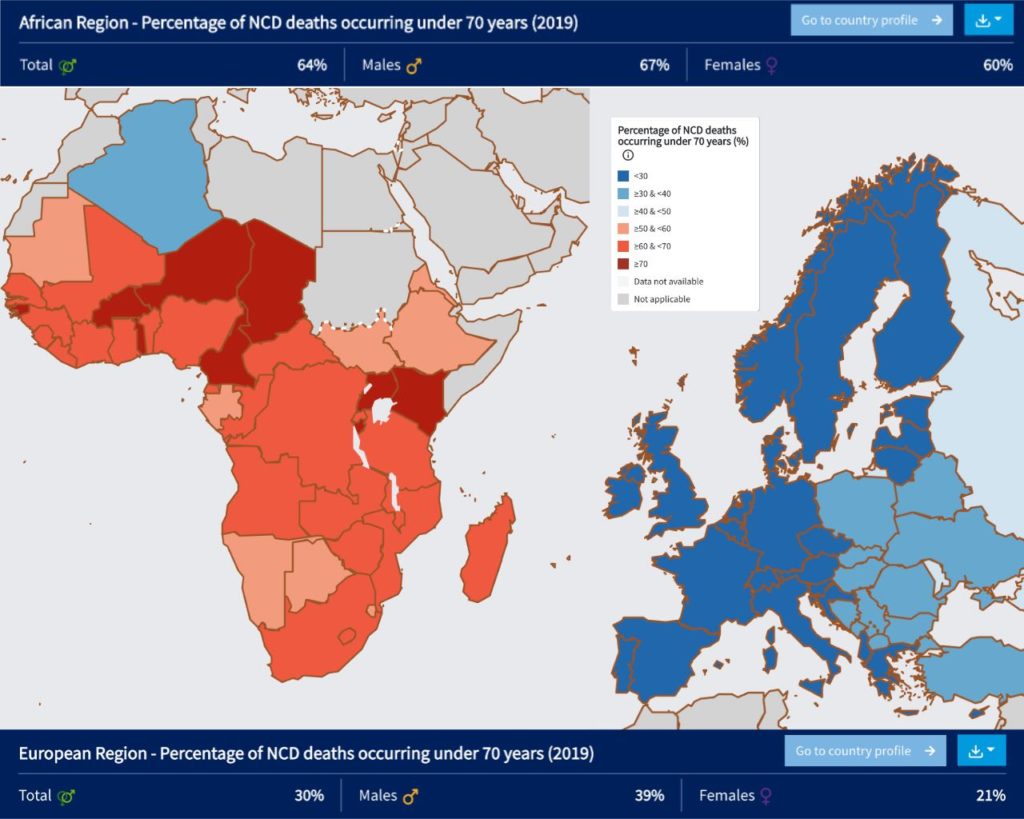 In Europe, the average of premature NCD deaths is 30%, with some countries like Sweden achieving rates as low as 16%.

In stark contrast, the African region averages 64% in premature NCD mortality, with countries like Kenya, Chad, Niger and Cameroon sitting at 70% and over.

Furthermore, between 50% and 88% of deaths in seven countries in Africa, mostly small island nations, are due to NCDs, according to the 2022 WHO NCD Progress Monitor.

In most parts of Africa, NCDs are only treated at health facilities in big cities, putting treatment for chronic diseases out of the reach of most rural, semi-rural and low-income populations. 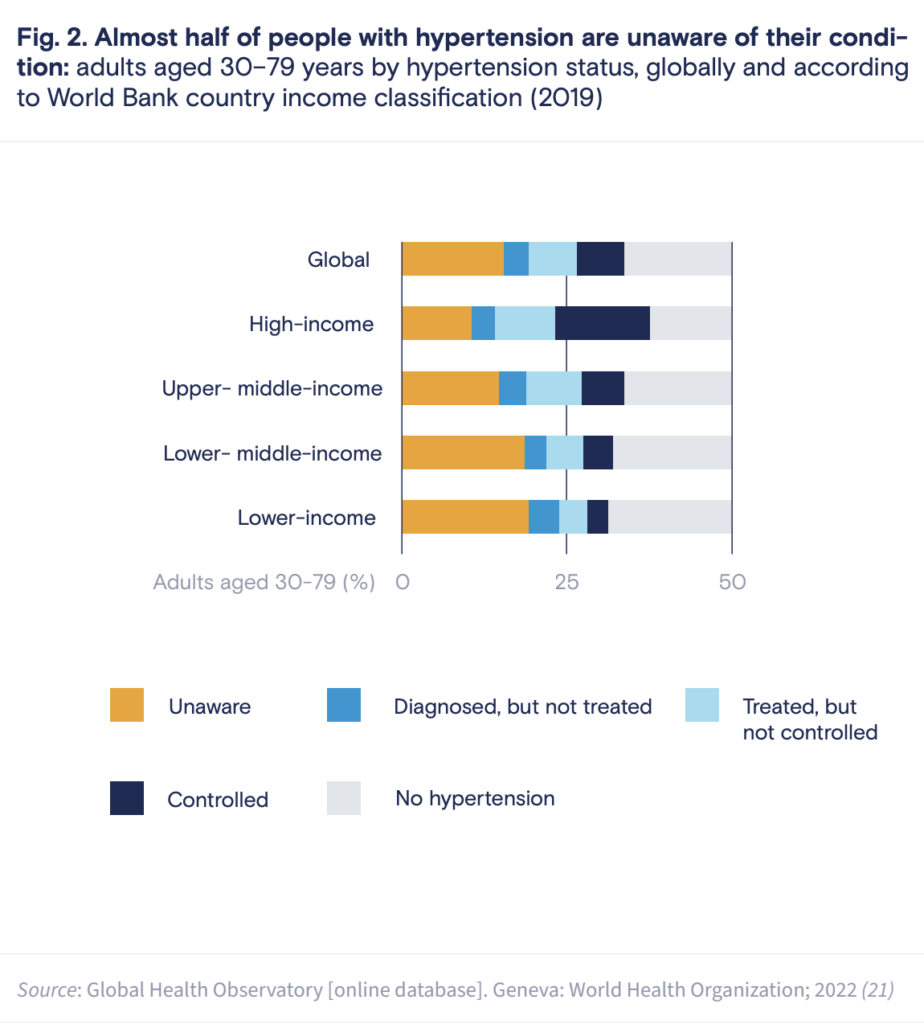 As health services in low and middle-income countries in Africa and beyond have yet to adapt to the growing burden of NCDs, their threat is growing exponentially.

“If you look at the top 10 causes of death versus rates of increase today, it is only continuing to go up for NCDs while going down for infectious diseases in almost every income setting,” a spokesperson for WHO told Health Policy Watch.

WHO’s Africa Regional Director, Dr Matshidiso Moeti, emphasized the need for decisive action by continental leaders on the eve of a high-level summit on NCDs in Ghana this April.

“The growing burden of noncommunicable diseases poses a grave threat to the health and lives of millions of people in Africa,” she said.

In August, African health ministers adopted a new regional strategy, known as PEN-PLUS, to improve the diagnosis and treatment of severe forms of NCDs in district hospitals and first level referral facilities where care is largely unavailable today.

Just 36% of African countries said they had essential medicines for NCDs in public hospitals, according to a 2019 WHO survey.

About 97 million Africans – more than 8% of the population – incur catastrophic healthcare costs every year, according to a 2021 report on healthcare in Africa from the Africa Health Agenda International Conference. This pushes about 15 million people into poverty annually.

A comparison of the risk factor rates relative to their NCD outcomes between the two regions through the data portal shows a stark picture of how underinvestment hurts health outcomes.

Taking the examples of diabetes and cardiovascular disease versus their key risk factors, or precursors, which are obesity and physical inactivity, the data disparities between Europe and Africa are telling.

In Europe, the data shows that 59% of the population is overweight, with the obesity rate sitting at 23%. The average physical inactivity rate is 29% across the region.

In Africa on the other hand, the data shows just 31% of people are overweight, and only 23% are obese. The difference in average physical inactivity rate is less striking, but still seven points lower than the European region at 22%. 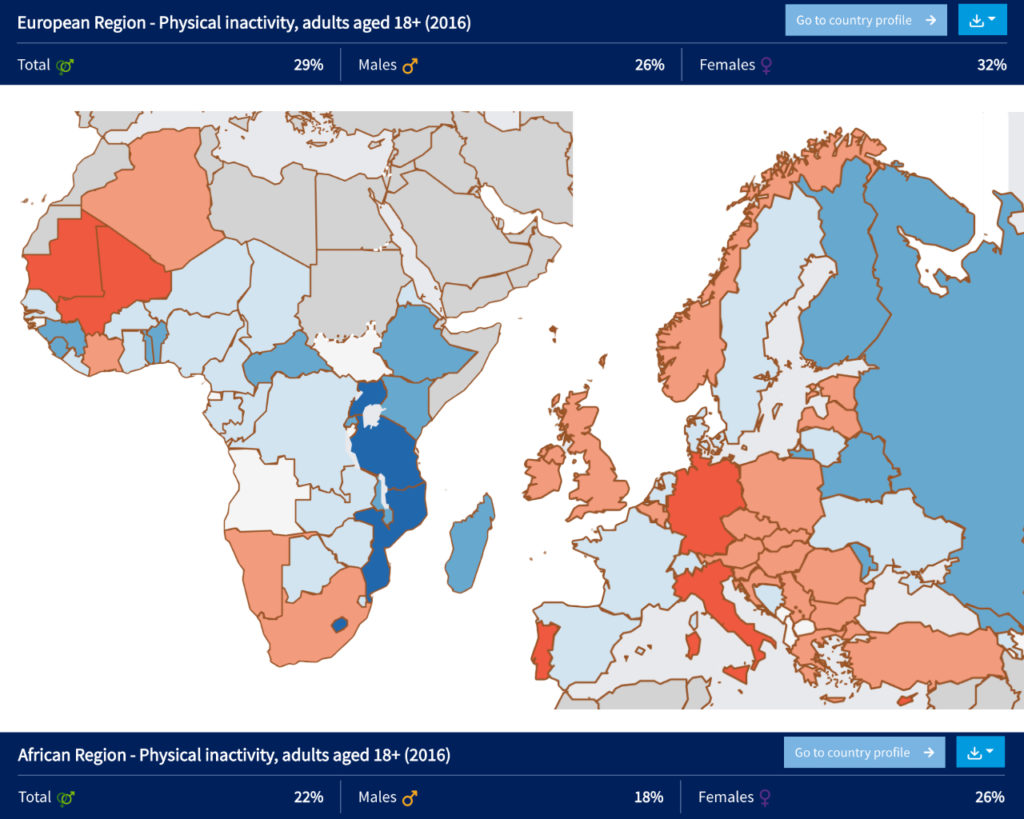 Despite these apparent advantages in the prevalence of key risk factors, the age-standardized death rate in Africa for diabetes is 48 per 100 000 people, nearly five times higher than Europe’s rate of 10 per 100 000.

“Only 50% of people have access to insulin some 100 years after its discovery”, Mikkelson noted, citing a WHO report from 2021. 90% of the the insulin market is tightly controlled by three multinational companies: Novo Nordisk, Eli Lilly, and Sanofi.

“Chronic diseases are now beginning to outstrip infectious diseases as the main driver of preventable ill health and death in lower and middle income countries,” said Katie Dain, CEO of the NCD Alliance. “Families [in these regions] are becoming just as concerned about the health and economic costs of diseases like diabetes and hypertension as they are about HIV, tuberculosis or malaria.”

“NCDs will both fuel and be fuelled by the growing inequalities in our countries and globally,” Dain said. “Inaction and paralysis is not a viable option.”

SDG goal out of reach?

Only a handful of countries are set to reach the 2030 deadline of the global Sustainable Development Goal (SDG) to reduce NCD-related premature deaths by one third.

If past trends continue, LMICs – along with most of the rest of the world – will fall far short of the SDG targets. Yet with extra spending equivalent to 0.6% of LMICs’ gross national income per capita, 90% of LMICs could meet the target.

In addition, if every country were to adopt the NCD intervention strategies that are known to work, at least 39 million deaths could be averted by 2030.

“There are cost-effective and globally applicable interventions that can protect people from NCDs or minimize their impact,” the report states. “Every country, no matter its income level, can and should be using and benefitting from these policies – saving lives and saving money.”

According to a recent study published in the Lancet, spending an additional US$18 billion per year across all low- and middle-income countries (LMICs) could generate net economic benefits of US$17 trillion over the next seven years.

“The benefits of action go far beyond health, and [the data] proves once again that health should be seen as an investment, not a cost”, the report advised.

‘It isn’t that simple’

“It is often suggested that we as individuals are responsible for making decisions that lead to developing an NCD,” the report concludes. “But it isn’t that simple.”

With 2019 data showing assistance for NCDs amounted to just 5% of external aid sent to low- and middle-income countries, it is clear the NCD issue is not only a question of health, but also one of equity and sustainable development.

While the UNGA meeting, led by Ghana and Norway, hopes to herald a new era in the global fight against NCDs, progress is far from certain. The interventions outlined by WHO in the report are not new, and to date, there has been a global failure by countries to adopt them.

“I ask my Heads of State colleagues to join hands with me as we establish a Presidential Group, and as we find solutions to NCDs with a roadmap of universal health coverage and the Sustainable Development Goals,” he appealed at a meeting in Accra earlier this year.

“In our time,” Afuko-Addo said, “this will be our legacy.”

Mikkelson echoed the need for cooperation and urgency: “WHO is calling on all governments to adopt the interventions that are known to work to help avert 39 million deaths by 2030,” she said. “We need to come together, all hands on deck:  this is urgent.”