Just three days after almost 240 scientists criticized WHO for downplaying the risks of airborne transmission of tiny SARS-CoV-2 particles, or aerosols, the Organization edged closer to its critics point of view.

The tiny virus particles floating through the air may indeed infect some people, especially in poorly ventilated indoor settings. As a result, the donning of masks among groups of people standing one meter or less from each other would be warranted, WHO concluded.

“WHO, together with the scientific community, has been actively discussing and evaluating whether SARS-CoV-2 may also spread through aerosols… particularly in indoor settings with poor ventilation”, says the new WHO brief.

“Thus, a susceptible person could inhale aerosols, and could become infected if the aerosols contain the virus in sufficient quantity to cause infection within the recipient….

“Respiratory droplet transmission can occur when a person is in close contact (within 1 metre) with an infected person who has respiratory symptoms (e.g. coughing or sneezing) or who is talking or singing.”

The WHO revisions come as more and more COVID-19 disease outbreaks have been linked to overcrowded indoor spaces that lack effective ventilation such as churches and choirs, restaurants or fitness clubs. Particularly in such settings, critics have said that stronger WHO advice about the wearing of masks is needed.

“I applaud the WHO for the new brief”, said Professor of Epidemiology at Columbia University Stephen S. Morse. “It is an improvement [that suggests] WHO’s willingness to examine our assumptions, and to clarify some of the confusing definitions.  Science adapts to new information, and it’s to everyone’s benefit to re-examine assumptions.”

He also acknowledged that “WHO is in the difficult position that its advice has to be applicable all over the world, including resource limited settings, and that these recommendations often have to address both the general population, as well as healthcare infection prevention and control, where priorities may be different.”

Critics Say Virus Arc of Travel is 10 Meters – Not 1

But some critics immediately said that the WHO advice remained problematic — because the virus aerosols can in fact circulate much more widely, infecting people up to 10 meters away, at least in indoors spaces where it can linger for longer.

“Peer-reviewed scientific publications clearly demonstrate that particles even as large as 30 µm [micrometres] can move on air currents and travel more than 10 meters indoors”, said Donald Milton, professor of Public Health at the University of Maryland and an expert on respiratory virus transmission, in a tweeted response. “Even droplets as large as 100 µm can be inhaled and lodge in the nose.”

The WHO brief also falls far short of the much stronger recommendations that Milton and others were hoping for on the use of masks.

“First — the good. WHO included the recommendations to “Avoid … enclosed spaces with POOR VENTILATION;” and that we should “ENSURE GOOD VENTILATION in indoor settings, including homes and offices.” I’m really happy to see this.” said Milton, in a detailed tweet chain analysis.

“But… they only recommend face masks when within one meter of other people. This is very bad advice, especially in “enclosed spaces with poor ventilation,” he added.

“This terrible recommendation comes from the fundamental problem with the new WHO “scientific brief;” they do not use fact-based science to define “respiratory droplets” and “aerosols.” They only cite their own previous statements, not peer-reviewed scientific literature.”

“The extensive research and tremendous progress in the physics and biology of aerosols since 1940 appears to have had no impact. The contention that “respiratory droplets” in the size range of >5 to 10 µm [microns] in diameter only travel up to 1 meter is absolutely wrong,” he said. 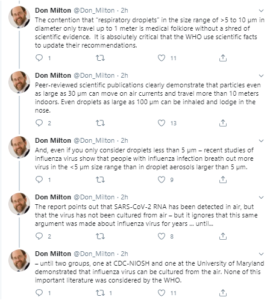 WHO Still Maintains Aerosols Are Secondary Mode of Transmission

Even with the revised guidance, WHO also continues to maintain that the virus causing COVID-19 is primarily spread through direct contact or larger respiratory droplets contained in coughs and sneezes  – rather than aerosols produced more routinely by speaking and breathing:

Critics, on the other hand, have said that aerosols are the ‘most likely’ form of transmission of SARS-CoV-2, as was the case for the virus that caused the 2003 SARS epidemic in Asia.

“Several retrospective studies conducted after the SARS-CoV-1 epidemic demonstrated that airborne transmission was the most likely mechanism explaining the spatial pattern of infections. “Retrospective analysis has shown the same for SARS-CoV-2”, said Lidia Morowska from Queensland University of Technology and Donald K. Milton from the University of Maryland, lead authors of the critical commentary published in the Journal of Clinical Infectious Diseases on Monday.

Other viruses that have been shown to aerosolize include respiratory syncytial virus (RSV), Middle East Respiratory Syndrome coronavirus (MERS-CoV) and influenza. As a a result, There is “every reason to expect that SARS-CoV-2 behaves similarly” to other viruses, stated Monday’s commentary. And with MERS, there’s evidence that aerosols could have been a source of infection in “at least one case”, said Morse.

If a “significant portion” of COVID-19 transmission turns out to be through aerosols, then current physical distancing precautions of 1-2 metres are likely to be insufficient, he added.

WHO Should Adopt Precautionary Principle On Aerosols Given Current Evidence

WHO’s hesitancy about acknowledging a wider transmission ring of the virus stems from the lack of experience culturing it out of samples in the air, the Organization states, noting:

“Further studies are needed to determine whether it is possible to detect viable [infectious] SARS-CoV-2 in air samples,” the WHO brief states, adding that transmission in crowded indoor spaces also “could be due” to other routes of transmission, like direct contact between individuals or respiratory droplets from coughing or sneezing.

In the face of unclear data, critics like Milton urged WHO to adopt the ‘precautionary principle’ to save more lives around the world:

“The report points out that SARS-CoV-2 RNA has been detected in air, but that the virus has not been cultured from air – but it ignores that this same argument was made about influenza virus for years – until two groups, one at CDC-NIOSH and one at the University of Maryland demonstrated that influenza virus can be cultured from the air,” he stated.

“It is understood that there is not as yet universal acceptance of airborne transmission of SARS-CoV2; but in our collective assessment there is more than enough supporting evidence so that the precautionary principle should apply.”

“Following the precautionary principle, we must address every potentially important pathway to slow the spread of COVID-19.”