In a little-publicised move, the WHA last week agreed to close a critical loophole in the WHO Pandemic Influenza Preparedness (PIP) Framework that could have allowed commercial vaccine manufacturers to indirectly make use of biological information about flu strains from another country – without providing that country with any benefits from the vaccines or antivirals subsequently produced.

Until the loophole was closed, laboratories or research centres that acquired virus material through WHO’s laboratory network – Global Influenza Surveillance and Response System (GISRS) – could have potentially shared information about the pathogens with commercial enterprises, which were not bound to sign any “benefit sharing” arrangement, according to a recent WHO assessment.

The WHA decision was part of its first review of the PIP Framework since 2016. The Framework aims to make flu strain sharing more efficient and effective to ward off the risks of a future pandemic – but also to ensure that developing countries reap the benefits of vaccines or other products that are developed.

The benefit sharing system established by PIP provides for companies – which produce flu vaccines, antivirals or other health products from materials available through the GISRS network – to offer free donations, royalty-free access or other forms of benefits to countries through WHO or directly. Such benefit sharing measures are particularly important to support budget-strapped low- and middle-income countries in preparedness and control of flu pandemics.

WHO has declined to say if companies had previously used the loophole to side-step the benefit sharing scheme, but member states were concerned enough to add new language explicitly stating that “any manufacturer that enters into any contract or formal agreement with recipients” of biological materials through the GISRS laboratory system also has to sign up to benefit sharing.

Including Genetic Sequence Data In PIP Remains An Issue

Yet another loophole, however, continues to exclude genetic sequence data of flu viruses altogether from the PIP reporting or benefit sharing arrangements. And on that longstanding debate, there was no further resolution at WHA.

While some countries and civil society advocates say that including genetic data in PIP is critical to make the system really effective, others remain keen to keep genetic data outside of any global regulatory agreement.

In last week’s WHA debate, the United States specifically noted that last week’s modification of benefit-sharing arrangements “should not be understood as expanding the scope of SMTA2 [standard material transfer agreement] to include benefit sharing based on the use of genetic sequence data.”

Indonesia and Thailand, however, said that genetic sequence data and biological material should receive the same treatment as biological flu samples.

The NGO Medicus Mundi International in their statement also argued that genetic sequence data should be included in the PIP framework. They referred to a 2016 PIP Expert Review Group recommendation that had recommended that the definition of the PIP biological material should explicitly include genetic sequence data.

A recent WHO paper on “Approaches to Seasonal Influenza and Genetic Sequence Data Under the PIP Framework” notes that inclusion of genetic sequence data was one of the “key issues that must urgently be addressed for the PIP Framework to remain relevant.”

The WHO analysis further noted that there are “already several examples of vaccines, diagnostics or other influenza products that have been developed using” genetic sequence data only. However, at this point of time, manufacturers still require access to biological materials to conduct the testing of such products.”

Another issue that requires further consideration, the report noted, was “whether or not the PIP Framework could be expanded to include seasonal influenza,” rather than just strains deemed to have potential pandemic risks by the GIRSR network. This issue has been discussed for some time, although some countries and outside experts expressed concerns that sharing seasonal viruses through the GIRSR system could overload it. 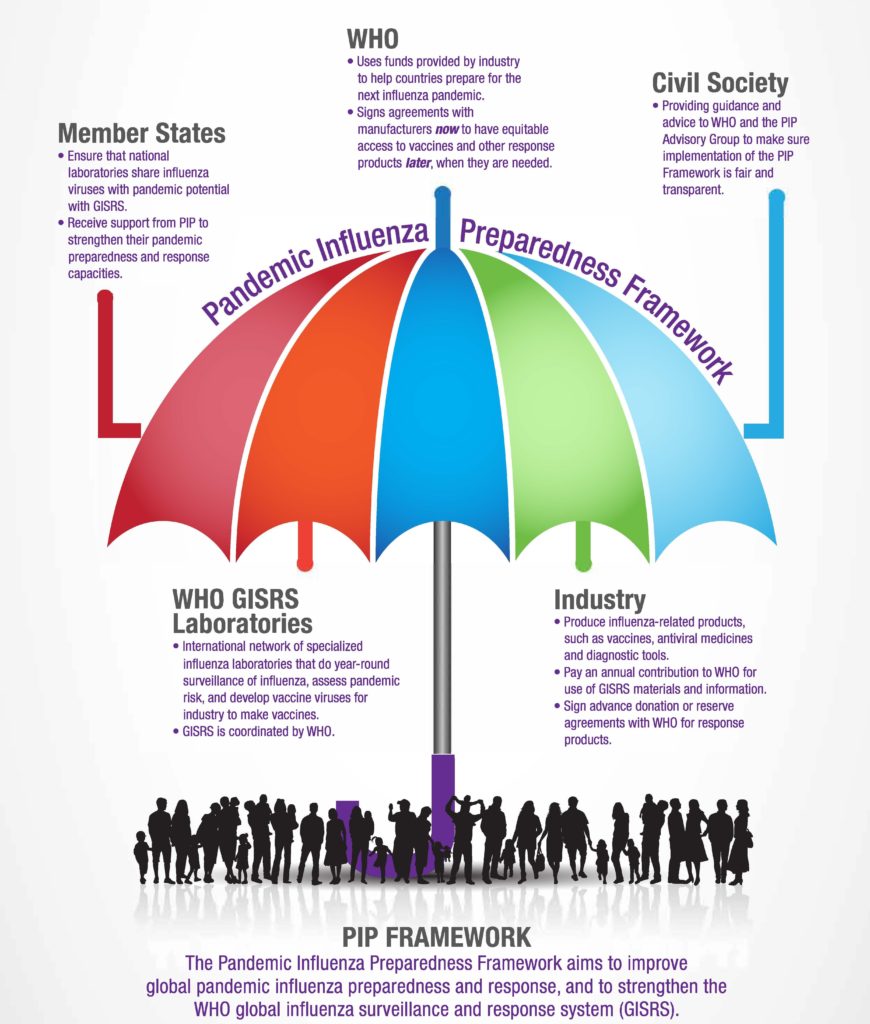 WHO has long emphasised that timely sharing of influenza viruses is critical to squash a potential flu pandemic.

The Pandemic Influenza Preparedness (PIP) Framework, established in 2011, facilitates a system through which flu viruses can rapidly be shared between the national influenza laboratories of various countries, as well as with other researchers and private entities.

Under the PIP framework, this sharing of biological materials is coordinated through WHO’s Global Influenza Surveillance and Response System (GISRS)’s international network. The GISRS network also assesses the risk of pandemic influenza.

However, the arrangement includes benefit sharing obligations so that countries supplying influenza virus materials, can get access to vaccines and antivirals produced commercially in another country.

Entities wishing to use the biological material from the GISRS network thus sign an agreement – a standard material transfer agreement (SMTA) – for which there are two variants:

No Escape Now From Benefit Sharing

At the Executive Board (EB) meeting in January, a PIP Expert Advisory Group warned member states that a loophole in the current contractual provisions existed, whereby vaccine or other health product manufacturers could indirectly make use of flu virus materials, through a laboratory that was not making a profit from its own research, and thus not technically bound by a benefit-sharing obligation. The loophole was elaborated in the December WHO analysis of the PIP framework.

Australia and South Africa then facilitated five consultations on proposed revisions to the existing text between January and May, culminating in the WHA’s decision to make revisions last week, so as to ensure benefit sharing by all commercial firms making use of the GISRS materials, directly or indirectly.

According to the strengthened text adopted last week:

“Any manufacturer that enters into any contract or formal agreement with recipients [of PIP biological materials from GISRS] or GISRS laboratories for the purpose of using PIP Biological Materials on the manufacturers’ behalf for commercialisation, public use, or regulatory approval, of that manufacturers vaccine, diagnostics or pharmaceuticals shall also enter into an SMTA2 and select among the commitments identified in Article 4.1.1 (a) to (c) based on their nature and capacities.”

Delegates taking the floor this week widely approved the change in language, albeit with the US reservation that genetic material is not, and should not be, covered by PIP.

Companies still have considerable discretion, however, in the benefits that they may choose to share. For instance, according to the transfer agreement, vaccine manufacturers can choose between a range of options, such as: donating 10 percent of their real time vaccine production to WHO; donating an unspecified number of treatment courses; or granting developing country companies royalty-free licenses for vaccine production.

As for seasonal flu viruses, while those remain outside of the PIP framework, there are concerns about timely sharing of biological materials, in order to prepare annual flu vaccines. These were expressed at WHA by pharmaceutical industry representatives, prompting WHA member states to ask WHO to further investigate and document such potential delays.

Concerns about seasonal flu virus sharing revolve around another international arrangement – the Nagoya Protocol on Access and Benefit-sharing of genetic resources.

The Protocol, adopted in 2010 by the UN Convention on Biodiversity (CBD), established a regime for systematic access and benefit sharing of the genetic resources from plants, animals, and other biological materials so as to avert plundering of a country’s genetic wealth.

But sharing viruses under the Protocol’s provisions, which include a complex set of national regulatory rules, procedures, and permits, can be time-consuming, some critics have said. And as the Protocol only entered into force in 2014, national regulations are not yet fully operational in many countries.

While the Protocol stipulates that due regard be paid “to cases of present or imminent emergencies that threaten human, animal or plant health,” observers say there remains confusion in some countries about how to implement that provision, with respect to flu virus sharing.

This issue was highlighted by the International Federation of Pharmaceutical Manufacturers and Associations, which said, in a statement to the WHA: “seasonal influenza virus sharing is already being negatively impacted by national implementation of the Nagoya Protocol in some countries.”

The IFPMA statement added that: “Several instances have been reported by the WHO Collaborating Centers where countries have delayed, or stopped altogether, the sharing of seasonal influenza virus samples on the grounds of conflict with local access and benefit sharing legislation, despite the existence of pre-existing WHO Terms of Reference for National Influenza Centers to supply influenza viruses to WHO Collaborating Centers.”

Last week’s WHA decision also opens the door for more exploration of whether the Protocol is impeding flu virus sharing. Specifically, the WHA asked WHO to work with GISRS and other partners to further enable “a deeper understanding of the challenges, opportunities, and implications for public health associated with virus sharing under the GISRS, including by identifying specific instances where influenza virus sharing has been hindered and how such instances may be mitigated.”

Image Credits: WHO, WHO .