NEW YORK CITY – Despite advances in Universal Health Coverage (UHC), as many as 5 billion people would be left without full access to healthcare in 2030 at the present rate of progress, according to a new report led by the World Health Organization. And financial protections that shield families from catastrophic health expenses have been eroded in some countries, says the report, released just ahead of Monday’s High Level Meeting on UHC here at UN Headquarters.

The Universal Health Coverage Global Monitoring Report 2019 calls on governments to redouble the pace of expanding coverage, and commit to spending at least 1% of their GDP on primary health care. The report was published just ahead of Monday’s expected adoption of a UN political declaration on UHC, committing UN member states to ensure that people worldwide can access quality healthcare affordably by 2030.

“Despite the progress, UHC coverage is stalled or not on track, and only about half the world population will be covered in 2030. Therefore, progress must markedly accelerate, and we need to double the coverage in order to reach the target of UHC for all by 2030,” said Samira Asma, WHO Assistant Director-General for Data, Analytics and Delivery, in a press briefing last week, just ahead of the start of the 74th UN General Assembly, where the UHC High Level Meeting is taking place.

The report was prepared by the WHO with contributions from the World Bank, the Organisation for Economic Co-operation and Development, the United Nations Population Fund, and UNICEF. The report was released today.

Primary health care is another key focus of the report’s findings. “Investing an additional US$ 200 billion a year on scaling up primary health care across low and middle-income countries would potentially save 60 million lives, increase average life expectancy by 3.7 years by 2030, and contribute significantly to socio-economic development,” WHO said in a press release. “It would represent a 5% increase on the US$ 7.5 trillion already spent on health globally each year.”

The 163-page report filled with the latest-available data and analysis shows an increase in the “UHC service coverage index” (SCI) measuring progress on SDG indicator 3.8.1 (financial protection and coverage of essential health services). The SCI rose from a global average of 45 (of 100) in 2000 to 66 in 2017, and all regions and income groups recorded gains, according to the report. 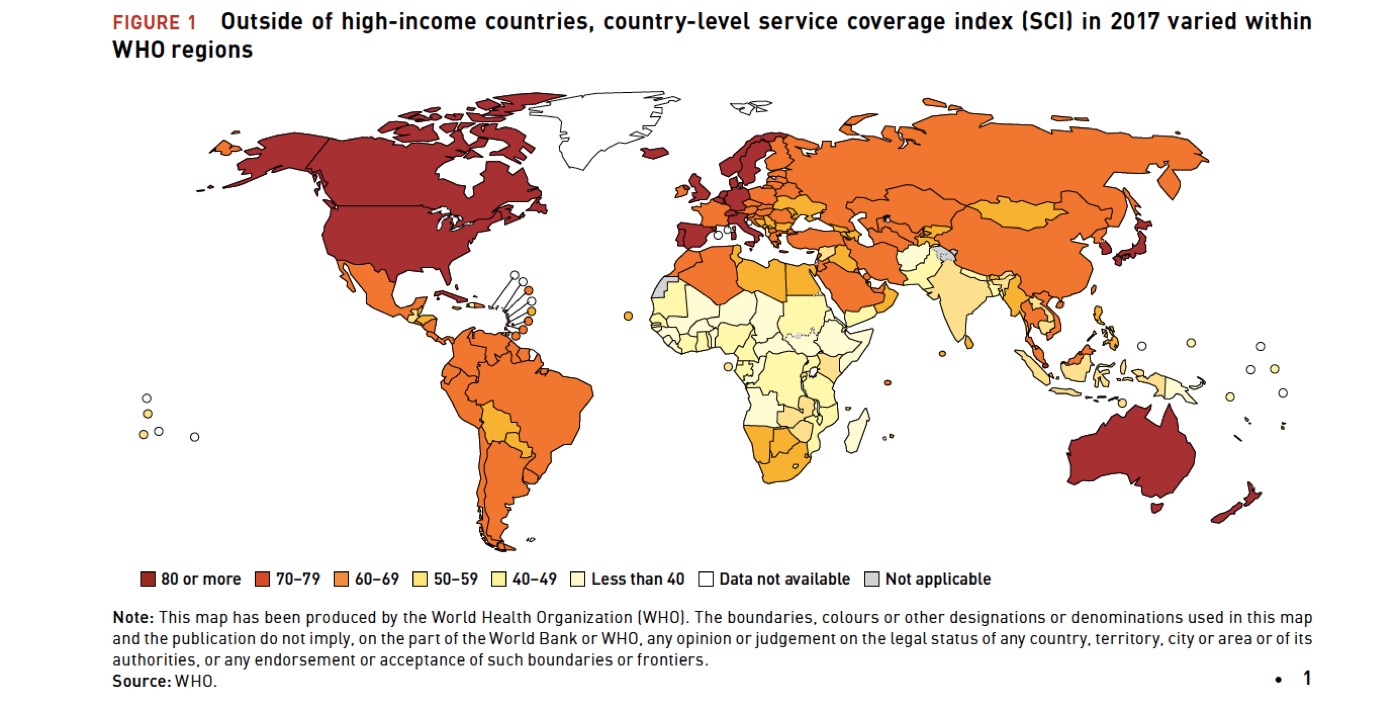 “This level of political commitment is more welcome than ever because it is essential on two fronts: first, to accelerate progress in areas where we have seen improvements; and second, to remove the barriers that are slowing down access to services in some countries and among certain populations,” WHO Director General Tedros Adhanom Ghebreyesus said in the report, referring to the High Level Meeting on UHC.

According to the report, “Progress has been greatest in lower income countries, mainly driven by interventions for infectious diseases and, to less extent, for reproductive, maternal, new-born and child health services. But the poorest countries and those affected by conflict generally lag far behind.”

But the pace of progress on UHC has slowed since 2010. Based on current trends, by 2030 only 39%- 63% of the global population would be covered for essential health services, the report projects. “Therefore, progress must markedly accelerate – and coverage needs to double – to reach the SDG target of UHC for all by 2030.”

In addition, levels of catastrophic health expenditures (SDG indicator 3.8.2), which represent out-of-pocket spending in proportion to household income, rose continuously from 2000 to 2015. Nearly a billion people spent more than 10% of household income on health in 2015, and over 200 million spent more than 25%, the report found.

The report comes against a backdrop of a UN General Assembly where the UHC meeting is a key highlight, said WHO officials.  In fact, this may be the first time the UN General Assembly has spent so much of its session on health and health-related climate issues, said WHO Chief of Staff Bernhard Schwartlander at last week’s press briefing.

“I think it is clear health is at the core of the Sustainable Development Agenda,” Schwartlander said. “In many ways, it’s a docking station for development overall for many other of the Development Goals, and UHC in a sense brings it all together.”

“The good news is that all around the world, across all income groups, health service coverage is improving, has improved in this time period. Unfortunately, the rate of progress is declining, in relation to issues such as non-communicable diseases, limitations in health systems, and the fact that the group of lower income countries are falling tragically behind,” Peter Salama, WHO’s executive director of  Universal Health Coverage & Life Course, told reporters.

Reaching the “Natural Limit” of the Previous Global Health Model?

“In many ways, we may have reached the natural limit of our previous global health model,” he said. “We see what is left in terms of coverage are some of the hardest countries – fragile states in particular – the poorest and most vulnerable, and also some of the hardest to reach people within countries: the rural poor, the peri-urban poor, for example,” he added.

On financial hardship, on one hand the world is getting richer, and overall poverty rates are declining, he said. But poverty related to health care expenditure is actually increasing. “So the improvements in service coverage are coming at a real cost to individuals and their families,” said Salama. “This cost is measured by out-of-pocket expenditures, which are increasing. One way we measure that is catastrophic expenditures, households that are spending over 10% or 25% of their overall income or consumption on basic health care. And they are both increasing.”

Both of these problems can be addressed by universal health coverage, the “cornerstone” of UHC as argued in the report, said Salama. On the price tag for UHC, he said, “Even though it seems like a large sum, we know that most countries can afford to do this based on their domestic resources. Only a handful of countries require international aid in order to scale up their primary health care.”

Francesca Colombo, Head of the Health Division at OECD, said that “a lot of good progress has been made,” but added that “it is quite shocking” to see the increasing number of people who are at risk of poverty due to health spending.

“And even in high-income countries where we have the lowest exposure to such risks, there has been a growth in the share and the number of people who spend large proportions of their household budgets on health. The out-of-pocket expenditures are mainly for pharmaceuticals and out-patient care, she said.

While high-income countries score better overall in terms of access to services, there remain many important gaps, she said, particularly in relation to preventative services, especially for the poorest. And there are inequalities which persist, such as at-risk women not getting breast cancer screenings.

Speaking at the same press briefing, Stefan Swartling Peterson, chief of health at UNICEF, stressed the importance of primary health care as a cornerstone of universal coverage. “As a parent, what I need whether I’m rich or poor is local access to good quality health services that I can afford. That service is primary health care, it’s not the big expensive hospital which is far away,” he said, adding that primary health care (PHC) can take care of 80-90% of a country’s healthcare needs.

“My message is that we need to make the last mile [to the household door] the first mile,” Peterson said. PHC is the pathway to reach UHC, and it is “very exciting,” he said to see the digital innovations that can deliver PHC more effectively. “This is really the cutting edge of health care delivery.”

Muhammad Pate, Global Director for Health, Nutrition and Population at the World Bank, stressed that UHC is key to human capital accumulation. It drives labour mobility, job creation, and also mitigates the risk of pandemics and other health emergencies, he said. While primary health care is the cornerstone for UHC, it needs to include access to essential drugs, he said, noting that costly drugs are a key driver of catastrophic health expenses. And such access needs to include not only drugs to treat common infectious diseases and maternal health conditions, but also the most prevalent NCDs, including mental health conditions.

Benoit Kalasa, Director, Technical Division at UNFPA, focused on areas where there are gaps in data and in services,  the first being maternal/newborn/children health, where he noted that  low-income countries continue to suffer from high rates of maternal and child mortality. More attention is needed to areas such as reproductive health, as well as to exploring why some women don’t use maternal/newborn or reproductive health services, due to social and gender concerns.

“The improvements will be accelerated if we pay attention to the human rights of girls and women to make decisions over their own bodies and strategically,” he said. Kalasa also mentioned the “population dynamic” placing a burden on health systems as the global population is expected to reach 8.5 billion by 2030 and will also be changing in terms of age, mobility and urbanization.

Monday’s High Level Meeting on UHC is expected to be filled with grand statements, but it will remain to be seen what concrete commitments are made during this General Assembly, and how they will be implemented going forward.