Although taxing tobacco products is one of the most effective ways to discourage smokers – and it provides governments with revenue – it is “the least implemented” tobacco control policy globally, according to the World Health Organization (WHO).

“It takes vision and courage for political leaders to stand up against the powerful vested interests that profit from tobacco,” said WHO Director General Dr Tedros Adhanom Ghebreyesus at Monday’s launch of a manual on tobacco tax administration aimed at helping governments to levy taxes.

Tobacco use accounts for an estimated eight million deaths a year, but only 38 countries covering 14% of the global population had sufficiently high tobacco taxes in 2018, according to the WHO.

“Raising tobacco taxes so that they account for at least 70 percent of retail prices would lead to significant price increases, induce many current users to quit, and deter numerous youth from taking up tobacco use, leading to large reductions in the death and disease caused by tobacco use,” according to the WHO.

Sri Lanka and Oman are amongst the handful of countries with high taxes – accounting for 70% and 64% of the price of cigarette packs respectively.

“We have increased this tax at regular intervals in order to effectively decrease the affordability, and therefore the consumption, of these deadly products,” said Wanniarachchi, but added that bidis and chewing tobacco also needed to be taxed at the same level as cigarettes as they were “just as deadly”.

Oman’s health minister, Ahmed Mohammed Obaid Al Saidi, told the launch that his country had raised taxes from 25% to 64% between 2018 and 2020 and expected this to have an impact on consumption although “smoking is very low” in Oman.

Jeremias Paul, the WHO’s Coordinator of the Tobacco Control Economics Unit, said that the tobacco industry used scare tactics to dissuade governments from taxation, including claiming taxes were anti-poor, would cause job losses and result in court action.

He urged governments to prepare adequately to combat industry arguments, and that the manual would assist with this. 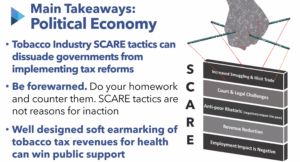 Young people are two to three times more responsive to taxes and price than older persons, thus “higher taxes and prices are particularly effective in keeping young people from moving beyond experimentation with tobacco use, preventing them from becoming regular and, eventually, addicted users”, according to the manual.

It guides readers through the steps necessary to create strong tobacco taxation policies, including practical pointers on how to navigate through the political process and win support for taxes.

In the “best practice” chapter, the WHO urges governments to use the tax revenue to address the health problems caused by tobacco, implement a simple excise tax, tax all tobacco products in a similar way to avoid consumers moving from one product to another and eliminating duty-free sales.

Where the tobacco industry has threatened job losses, “using a portion of new tobacco tax revenues to move tobacco farmers into other crops or to retrain those employed in tobacco product manufacturing for work in other sectors would significantly reduce these concerns”.

“Improved tobacco tax policy can be a crucial component of building for better,” said Yamamoto. 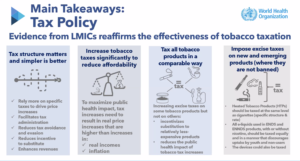