The tobacco industry used the COVID-19 pandemic to ingratiate itself with governments around the world and win concessions for their harmful products, according to a review of 80 countries analyzed in the Global Tobacco Industry Interference Index 2021, which was released on Tuesday.

It wasn’t simply economically vulnerable countries that were susceptible to industry influence. The Swiss government allowed one of the highest levels of influence, second only to the Dominican Republic.

The Index notes that the president of the Swiss Tobacco Trade Association, Gregor Rutz, is a member of the Swiss National Council, the lower house of the Federal Assembly of Switzerland, thus “ensuring direct access to policymaking”.

Switzerland also doesn’t have an age limit of 18 years on the purchase of tobacco products, which have not had a tax increase since 2013. Swiss tobacco farmers also receive subsidies, and the country is home to a wide range of powerful tobacco companies.

Countries that have not signed the World Health Organization’s (WHO) Framework Convention on Tobacco Control (FCTC), face high levels of industry “meddling” which, aside from Switzerland and the Dominican Republic, include Argentina, Indonesia and the US.

“The tobacco industry’s behaviour during COVID-19 wasn’t just business as usual – this research suggests it’s been far worse in terms of scale and impact,” said Mary Assunta, of the Global Center for Good Governance in Tobacco Control, and lead author of the Index.

“The tobacco industry exploited the COVID-19 pandemic with a multi-pronged tactic to entice, persuade and coerce governments towards weaker public health policies. Many governments, made vulnerable by the pandemic, freely accepted and endorsed charity from the industry, when such donations often come with strings attached, and compromised on policies,” according to Stopping Tobacco Organizations and Products (STOP), an alliance of organisations that produces the index.

“Instead of removing benefits to the industry, many governments made decisions that benefited the industry, particularly in lowering or not imposing taxes and delaying legislation or its implementation.” 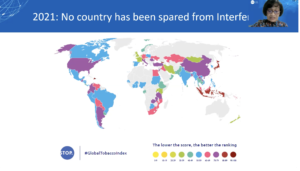 Eighteen governments improved how they shield themselves from industry influence from the previous year, while 31 governments deteriorated in their efforts. Globally, Brunei, New Zealand and the UK were best able to resist industry attempts to influence policy.

In addition, Botswana published a tobacco control law that limits interaction between the government and industry, including the prohibition of partnerships with or incentives for the industry.

India’s health ministry adopted a code of conduct restricting collaboration between officials with tobacco industries, and  Cambodia’s Ministry of Education banned all forms of partnerships between educational facilities and the tobacco industry.

Industry activity was linked to delays in the implementation of tobacco control laws in countries including Bolivia, Ethiopia, Georgia, Guatemala, South Africa, Tanzania, Turkey and Zambia, the Index notes.

Ukraine was subjected to  “legislative spam”, where a tobacco control bill was delayed by the submission of several alternative bills, some sponsored by members of parliament connected to the tobacco industry, reports the Index.

In Georgia, the three multinational tobacco companies active there (British American Tobacco, Japan Tobacco International and Philip Morris International) met with the Prime Minister in relation to the pandemic. 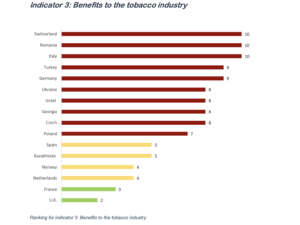 “In the middle of a pandemic, health should be the primary consideration in all policy decisions, but it was often sidelined in favour of the industry’s commercial interests,” said Assunta.

“Where policy isn’t well protected, more lives will be lost to tobacco and post-COVID economic recovery may be impacted, with higher health costs and potentially less tax revenue to fund recovery.”

“Since the start of the pandemic, independent studies have found that smokers are more likely to develop severe COVID-19 as compared to non-smokers. Tobacco use is a known risk factor for a range of chronic conditions that also place people at greater risk from COVID-19,” notes the Index.

“While the pandemic wreaked havoc around the world and the global economy suffered, two of the world’s biggest tobacco companies reported earnings before tax of more than $10 billion each,” added Assunta.

“Governments must hold this industry accountable and it must not be permitted to meddle in policy. It is time for all countries to ban tobacco-related corporate social responsibility activities.”