A “terrible third wave” of the COVID-19 pandemic is now hitting Africa in full force – with about 20 of the continent’s 54 countries experiencing particularly sharp rises in new infections, African Centers for Disease Control director, John Nkengasong told Health Policy Watch at a press briefing on Thursday.

Although the continent-wide average is still only about 27 new cases per million, below the current US average, (34/million), the increases seen are prompting worries that Africa could even become a new global epicentre for the pandemic. That after nearly a year when it managed to maintain comparatively low case counts.

Daily new cases per million people in Tunisia and South Africa are now running at nearly 200 infections/million. In comparison, in the United Kingdom new cases now stand at 149/million and in hard-hit India at 40 per million, over the last week.

The new wave has already stretched several health systems on the continent beyond their limits,  Nkengasong said.

“This is the first time that we are seeing countries report that their health systems are completely overwhelmed,” he said. 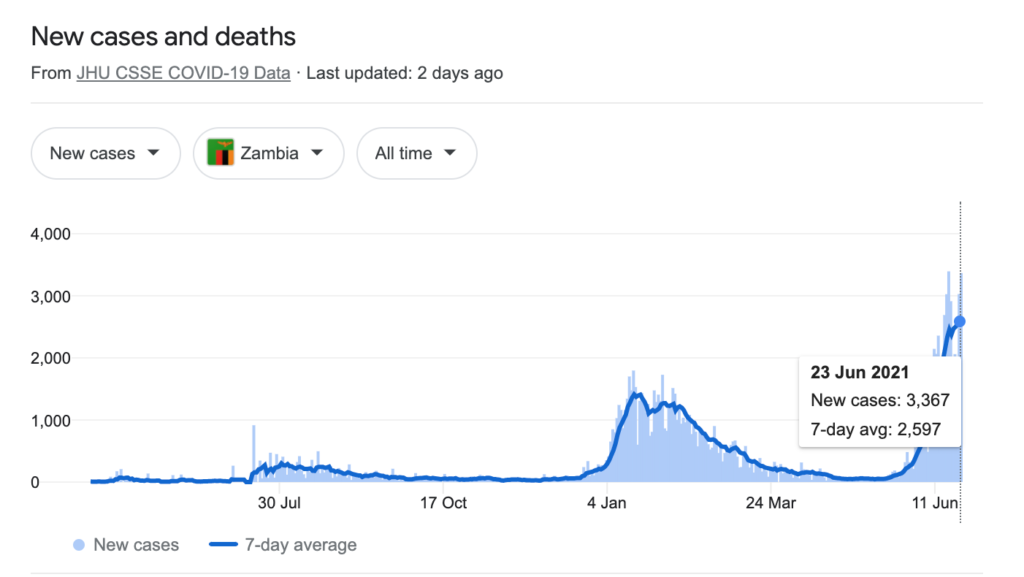 In Zambia, daily new infections are averaging 138/million the highest ever recorded since the pandemic was declared.  That, in turn, is biting health systems hard, Nkengasong said.

According to the latest figures, on June 23, the country reported 3,367 new cases of COVID-19 over the past 24 hours – the highest number of daily reported cases yet in the country. It was also nearly double the number of cases (1,796) reported on 16 January 2021 when the country reached the peak of its second wave.

Nkengasong revealed that aside from the already dispatched commodities, Africa CDC will also be sending a team of experts to Zambia to help the country cope with the third wave. “They are completely overwhelmed,” he  said.

The health systems of Uganda and the Democratic Republic of Congo are facing similar crises, he added.

In conflict-ridden DRC, meanwhile, the lack of strong systems for COVID testing and case reporting may also be keeping the numbers artificially low, inside observers told Health Policy Watch.

DRC has also been one of the most vaccine hesitant countries – turning back a large shipment of COVAX vaccines that it received to Africa CDC in April because it did not have the means to administer the doses. Even among the country’s large presence of UN forces and support teams, who have ready access to dedicated vaccine donations from India, vaccinations have progressed at painfully slow rates, observers told Health Policy Watch.

Steepest COVID-19 Surge Yet — WHO

At a separate WHO briefing, WHO Regional Director for  Africa Matshidiso Moeti described the third wave as the pandemic’s steepest surge yet continent-wide.

According to WHO’s data, the number of cases have risen for five consecutive weeks since 3 May.

As of 20 June—day 48 into the new wave—Africa had recorded around 474 000 new cases—a 21% higher rate as compared with the first 48 days of the second wave. At the current rate of infections, the ongoing surge is set to surpass the previous one by early July, WHO stated.

“With rapidly rising case numbers and increasing reports of serious illness, the latest surge threatens to be Africa’s worst yet,” Moeti warned.

But even though the window of opportunity may be closing, she noted that Africa can still blunt the impact of the currently fast-rising infections.

“Everyone everywhere can do their bit by taking precautions to prevent transmission,” she said. For instance, after Uganda slapped on new restrictions last week, new cases there appeared to be plateauing.

Vaccine Supplies May Not Arrive In Time

Despite promises of hundreds of millions of doses from different partners, including the United States government, the timeline for the delivery of the doses may not see their arrival in time to really help African countries combat the third wave, both WHO and Africa CDC officials warned.

Globally, of the 2.7 billion vaccine doses administered, under 1.5% have been in the arms of Africans.

According to the Africa CDC, 61.4 million COVID-19 vaccine doses have been received so far  by 51 African member states out of which 48.6 million doses have been administered (79.52%). So far, only 1.12% of the African population has been fully vaccinated.

Most of those supplies were received in March & April this year through the WHO co-sponsored COVAX vaccine facility – before COVAX supplies produced by the Serum Institute of India dried up as a result of India’s COVID infection spike.

Nkengasong agreed: “What we need is rapid access to vaccines to member states. It is extremely frightening to look at the graphs from some African countries. We just really need vaccines to get into people’s arms very quickly.”

Without any intentional actions to speed up vaccine dose supply to Africa, Nkengasong said member states may have to wait until August when doses are expected to start becoming available through African Union’s COVID-19 Africa Vaccine Acquisition Task Team (AVATT).

WHO and Africa CDC also called attention to the rapid spread of the Delta variant of the virus that was first reported in India, across the African continent.

The Delta variant, has already been reported in 14 countries in Africa, rapidly catching up with other variants, Moeti said.

“In the Democratic Republic of the Congo and Uganda that are experiencing COVID-19 resurgence, the Delta variant has been detected in most samples sequenced in the past month,” she noted.

“We have seen that variant really aggressively taking over from other variants, not just in Uganda, but in other countries like the DRC,” Nkengasong added.

WHO said it is taking steps towards expanding the capabilities of various African countries to track the spread and evolution of the virus in order to guide epidemiological decisions.

“We are supporting South Africa-based regional laboratories to monitor variants of concern,”  Moeti said. “WHO is also boosting innovative technological support to other laboratories in the region without sequencing capacities to better monitor the evolution of the virus. In the next six months, WHO is aiming for an eight- to ten-fold increase in the samples sequenced each month in Southern African countries.”