Raising taxes on tobacco, alcohol and sugary beverage products by more than 50 percent could prevent more than 50 million premature deaths due to noncommunicable diseases (NCDs) over the next 50 years, while yielding over US$ 20 trillion in revenue. That is the conclusion of a report by a global task force headed by philanthropist Michael Bloomberg and economist Lawrence Summers. 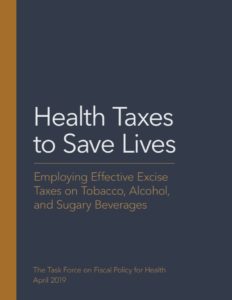 The majority of deaths from NCDs, such as cardiovascular disease, cancer, respiratory disease and diabetes, occur in low- and middle-income countries where consumption of tobacco, alcohol and sugary beverage products is rising. This, the report notes, is due to increasing incomes and sustained industry efforts to make these products more available and affordable.

To address this, the report, Health Taxes to Save Lives, released last week by Bloomberg Philanthropies’ Task Force on Fiscal Policy for Health, recommends that countries rapidly and significantly increase taxes on tobacco, alcohol and sugary beverages.

It says that increasing taxes is the most effective policy intervention to reduce consumption of these products, and to address the growing NCD epidemic, particularly for low- and middle-income countries.

The report notes that governments “face strong opposition to raising taxes on tobacco, alcohol and sugary beverages from producers and their allies who persistently raise concerns about the impact of tax increases on revenues, employment, illicit trade, and the poor.”

However, it says that the evidence shows that these arguments “are either false or greatly exaggerated, and none justify inaction.”

“Countries can save millions of lives if they take action,” Michael Bloomberg, Task Force chair, World Health Organization Global Ambassador for NCDs and founder of Bloomberg Philanthropies, said in a press release.

“Despite the clear and growing body of evidence, industry opposition to smart health policies will continue to mislead the public about the harmful effects of their products, he said. “That makes it all the more important for the international community to support countries in adopting effective, evidence-based health policies that will save lives.”

“If we want to improve global health, we need to tax the things that are killing us,” Lawrence Summers, Task Force co-chair, former secretary of the US Treasury and former director of the National Economic Council, said in the release.

Noncommunicable diseases are the leading cause of death in the world, “killing more than 41 million people each year and accounting for 70 percent of all deaths globally,” according to the release.

Deaths from NCDs, such as cardiovascular disease, cancer, respiratory disease and diabetes, have risen since the year 2000, with the greatest increases in low- and middle-income countries, as illustrated in Figure 1 from the report below. 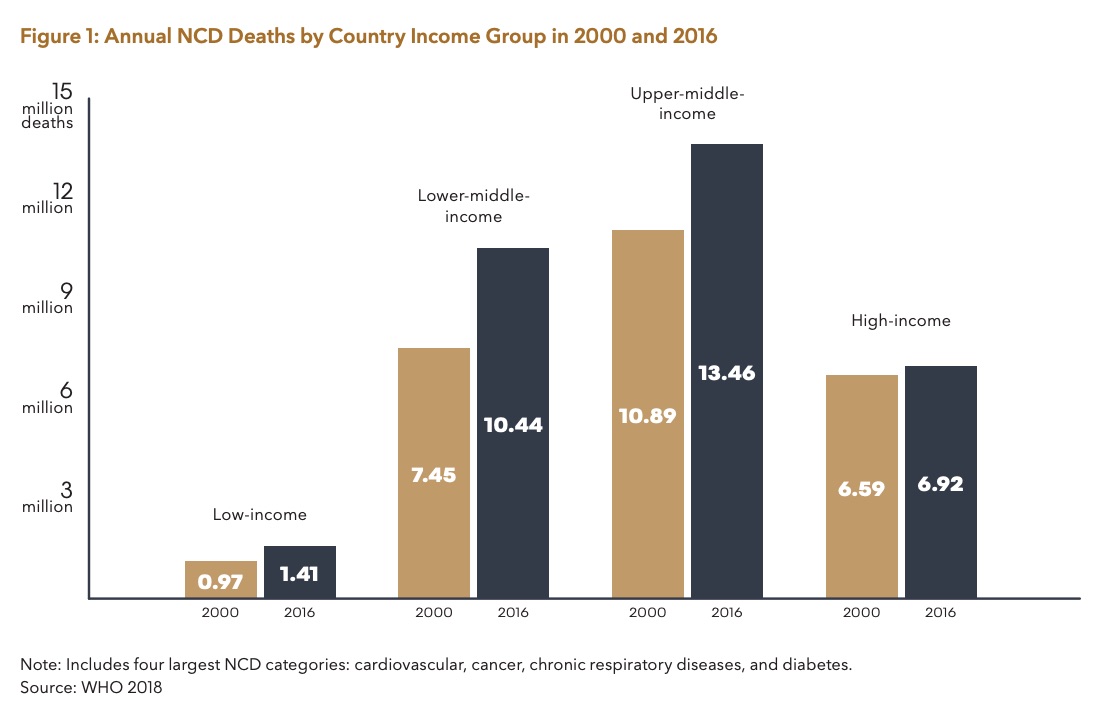 It proposes that taxes on tobacco, alcohol, and sugary beverages “should be seen primarily as health taxes,” in light of the fact that the health impact of these taxes is so large. The corresponding increase in revenue, it says, would also be a welcome benefit for all countries, and “particularly useful for domestic resource mobilization in low- and middle- income countries.”

It says that the health effects of these taxes are larger among lower-income groups and young people, because “high prices deter initiation and reduce use over the lifetime,” noting that “most smokers start smoking when they are young and young people are more responsive to price increases than their elders.”

The World Health Organization recommends a minimum tax of 70 percent of the retail price of tobacco products, according to their 2010 technical manual on tobacco tax administration, and a tax of 20 percent on sugary beverages, according to their 2016 report on Fiscal Policies for Diet and Prevention of Noncommunicable Diseases. The WHO has not yet made similar recommendations on alcohol.

In addition to tax interventions, the report recommends other policy measures including “bans on advertising, promotion, and sponsorship, public information campaigns, warning labels, prohibiting sales to minors, and restricting places and times where products can be purchased or consumed.”

While it highlights the fact that “significant tax and price increases are the most cost-effective” measure to reduce consumption of tobacco, alcohol, and sugary beverages, it notes that all of these policy measures work hand-in-hand as part of a comprehensive NCD prevention programme.

The report concludes by calling upon the international community to: “take action to support countries to adopt, implement, and significantly raise effective health taxes. This includes actions to support governmental capacity to implement evidence-based health policies, to adopt or revise agreements that constrain domestic health tax reforms, to disseminate evidence on the effectiveness of health taxes, to refute misinformation, and to provide technical assistance and political support to governments that face industry opposition.”